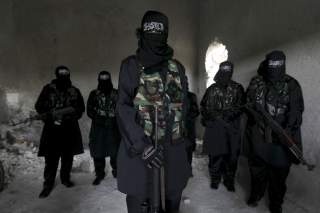 KOBANE, SYRIA—President Donald Trump entered office promising to reduce if not end America’s military engagement in the Middle East. “Great nations do not fight endless wars,” he declared. Trump appears determined to keep his promise. In December 2018, he surprised his national-security team when he announced that he was going to pull troops out of Syria. “We have defeated ISIS in Syria, my only reason for being there,” he explained. “Our boys, our young women, our men—they're all coming back, and they're coming back now. We won. And that’s the way we want it, and that’s the way they want it,” he added. Amidst the ensuing policy chaos, the president doubled down. Turkey “should be able to easily take care of whatever remains” of Islamic State, he explained. Trump’s advisors talked him out of such a precipitous and premature move, but Trump’s instincts infuse current diplomacy to create a buffer zone along the Turkish-Syria border. In short, however, such a policy is misguided, even if international forces participate. Sterile talk about buffers and safe zones may sound good in Foggy Bottom, but U.S. Envoy to Syria Jim Jeffrey’s policies both fan the flames of extremism and set the Kurds up for a massacre reminiscent of the Serbian slaughter of Bosnian Muslims at Srebrenica a quarter century ago.

To understand why Jeffrey’s Syria and Kurdish policies are so destructive, it is important to understand Syrian, Turkish, and Kurdish history. First, it is crucial to understand why Syria’s Kurds cannot trust Assad. In 1982, Hafez al-Assad, the father of the current Syrian president Bashar al-Assad, cordoned off the center of Syria’s fourth largest city Hama and destroyed it after an operation to capture a Sunni insurgent leader went awry. The ensuing massacre killed at least ten thousand people although Assad liked to brag that the death toll was much higher. In Beirut to Jerusalem, author Thomas Friedman coined the term “Hama Rules” to describe Assad’s absolute brutality to crush an enemy.

That was only half the story, however. Assad did not simply seek to crush the Muslim Brotherhood; he sought to co-opt it and find a new modus vivendi. He struck a devil’s bargain with Syria’s Sunni Islamists: They were free to conduct their jihad, but only in his service or outside Syria. In March 2004, for example, Assad unleashed Arab Islamists alongside Baathists in his efforts to crush Kurdish identity in northeastern Syria. Simultaneously, Bashar al-Assad allowed Syria to become the main highway for foreign fighters seeking to enter Iraq to conduct terrorism and wage insurgency against both U.S. forces and the Iraqi government. In 2009, none other than Nouri al-Maliki, Iraq’s corrupt, sectarian and pro-Iranian prime minister, blamed Syria for facilitating terrorism in Iraq. This history explains why Syrian Kurds today both distrust the Assad regime and the Sunni Arab opposition.

Upon the outbreak of the civil war, Syrian Kurds consolidated control over the administration of northeastern Syria. Isolated and blockaded not only by the Syrian regime and Turkey, but also by the Kurdistan Regional Government in Iraq, the Syrian Kurdish People’s Protection Units (YPG) managed to defeat the Al Qaeda-affiliated Nusra Front with little more than small arms purchased on the local black market. When I first visited Syrian Kurdistan—or Rojava as Kurds call it—in January 2014, the border post was still charred from recent fighting and both Islamist and Assad-era documents lay scattered in the basement. Nevertheless, the Kurds—as well as Christians, Yezidis, and local Arabs—had banded together to form a local government. Although that government may not have been perfect, it was tolerant and secure. Girls walked to schools without fear of molestation, municipal services functioned, and markets bustled. Displaced Arabs from elsewhere in Syria resettled in areas under Kurdish administration.

That was only the beginning. Over the past week, I returned to the region to see Qamishli (parts of which Assad still controls), Amuda, and the former Islamic State capital of Raqqa. I also visited Kobane where Kurdish forces broke a six-month Islamic State siege that began September 15, 2014. I walked through the rubble of blocks of apartments and shops leading up to the Turkish border and stepped around burnt-out vehicles. Ismet Sheikh Hassan, a Kurdish commander who remained in Kobane alongside his sons throughout the siege, spoke about the sacrifices local Kurds made to defend the predominantly Kurdish city, even as Turkey supplied and sometimes even allowed the Islamic State safe passage across the border. The nearby cemetery is a testament to that sacrifice. Photos adorn the cemetery of those fallen in Kobane’s defense. Arabs, Kurds, and Christians lie next to each other. The sheer scale of Kurdish losses—and the youth of the defenders, most just eighteen to twenty years-old—both highlights the sense of a generation lost unnecessarily because of Turkey’s actions and redoubles the sense of those who survived to make the sacrifices of their loved ones matter.

Kobane was not the only battle, but it did change the tide of war. Whereas U.S. diplomats refused to talk to Syrian Kurds during my first trip to the region out of deference to U.S.-Turkey partnership, the reality of Turkey’s passive if not active support for the Islamic State and other extremist groups in Syria convinced Washington that victory over the Islamic State required cooperation with Syrian Kurdish militias, regardless of Turkey’s allegations that they have terror ties.

Turkish accusations may be vociferous, but they should be ignored. It is true that there are links between the Kurdistan Workers Party (PKK) and the YPG, but there is no evidence that the YPG are terrorists. Turkey certainly considers the PKK, which previously waged insurgency against the Turkish army, as terrorists. That is where Turkey’s claim to truth ends. U.S. designation of the PKK occurred against the backdrop of the Clinton administration’s efforts to finalize a weapons sale to Turkey. And while the Turkish government says imprisoned PKK leader Abdullah Öcalan is a terrorist, Erdoğan infused Öcalan with legitimacy when, in 2012, he undertook secret negotiations and so made him the indispensable leader of the Kurds. Today Öcalan is less a Marxist and Cold War terrorist, and more a political philosopher and proponent of reconciliation. Kurds often compare him to Nelson Mandela.

Turkish President Recep Tayyip Erdoğan uses U.S.-Kurdish cooperation to fan the flame of anti-Americanism in Turkey, and some State Department officials—especially those whose attitudes toward Turkey were shaped by repeated service in the country or, in some cases, marriage to Turks—urge appeasing Erdoğan. Some argue that Erdoğan is transactional and meeting him halfway is wise to win other concessions, while others recognize his ideological agenda but suggest Turkey is too important an ally to risk alienating. It would be foolish to assume the status quo will work with Erdoğan. That would require ignoring sixteen years of Erdoğanism at every level of society, from education to media environment to military promotion.

A more realist analysis, however, shows the danger of appeasement. Syria’s Afrin district has, for centuries, had a majority Kurdish population. After defeating Islamist extremists, Syrian Kurds administered peacefully administered it. Securing the Turkish border was a strategic bonus. Turkey resented Kurdish control along its border and voiced a claim not borne by evidence that Afrin had become a terrorist safe-haven. The subsequent Turkish incursion—greenlighted by a Trump administration eager to appease Turkey and deny Erdoğan an excuse for a diplomatic break—greenlighted a Turkish incursion. The rest is history. Turkish forces systematically cleansed the region of both Kurds and Kurdish heritage. Turkish warplanes destroyed the tomb of Saint Maron and the fourth century Julianos Church, a UNESCO heritage site, according to the Mahmoud Hamoud, the general director of Syria’s Antiquities and Museums. Turks have allegedly bulldozed cemeteries, and Turkish forces have also pulled down a statue of Kawa the blacksmith, a legendary Kurdish hero. Such deliberate destruction is a war crime. What came next, however, makes Turkish aims crystal clear.

Turkish forces settled Arabs in Kurdish homes in order to change the demographic makeup of the region and change local culture: Turkish forces and their allies reportedly enforce a more conservative dress code, forcing women to cover their heads, for example. They welcomed in radical groups up to and including Al Qaeda groups making Afrin the very terror center Turks said they wanted to prevent. Turkey issued new local IDs, putting the Turkish flag alongside the Syrian. Whereas Kurds utilize Syrian Pounds, Syrian passports, and acknowledge Syrian sovereignty, Turkey has transformed Afrin into a new Northern Cyprus, setting the stage for an imperial and permanent occupation.

It is unlikely that Jeffrey’s buffer zone on the Syrian side of the border will work. Kurdish authorities rejected initial proposals to utilize Turkish forces out-of-hand because they were the equivalent of empowering Al Qaeda to combat the Islamic State.

Now, Jeffrey and the State Department propose an international force create a buffer zone in Syria. Not only would this be an expense venture and unravel Kurdish authority given the proximity of many Kurdish towns and cities including Raqqa and Qamishli to the border, but, as in Srebrenica, it could set the Kurds up for the kill given the unlikelihood that peacekeepers would be willing to defend Kurdish civilians from an onslaught by Turkish forces or their extremist proxies.