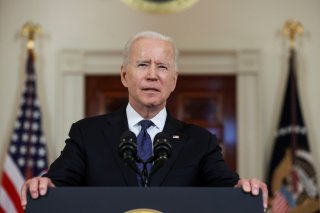 As a new ceasefire ending another round of violence in Israel-Palestine holds, the United States continues to operate as an impediment to long-term resolutions. In a situation where world leaders should be condemning violence and human rights violations—particularly by oppressive states with significant power asymmetry advantages—the Biden team has instead committed to “quiet diplomacy.” This approach is undeserving of praise for its so-called “success” as it fails to address the underlying issues of the conflict, is an extension of U.S. obstructionism, and comes at the expense of civilian lives—most of which are Palestinian.

Clarity surrounding the origins of the latest round of violence can help illuminate why Biden’s approach is inappropriate and ineffective. Fighting did not start with Hamas rocket attacks from Gaza—as inexcusable as they are—but rather as a result of apartheid-style oppression in the Occupied Palestinian Territories (OPT). Specifically, arbitrary attempts to force Palestinian families from their homes in the East Jerusalem neighborhood of Sheikh Jarrah, constituting ethnic cleansing given the area’s occupation status, have produced the worst fighting since the Second Intifada. The removals, resulting from the unlawful and unequal application of property ownership laws in the OPT, produced massive protests at the al-Aqsa Mosque in the middle of Ramadan and through Eid.

This proved to be exceptionally poor timing for the operations that followed. For consecutive nights, Israeli Defense Forces (IDF) shut down protests at al-Aqsa, eventually storming the mosque during mid-day prayers on the holiest week of Ramadan. In a frenzied series of events, the IDF launched tear gas at Palestinians on their knees in prayer, producing an ultimatum from Hamas—remove security forces from al-Aqsa or face renewed attacks from Gaza.

The subsequent events have been widely reported. Thousands of missiles were launched at Israel, killing twelve, while Israel launched a deafening air and artillery campaign against Gaza. In a blatant show of power asymmetry often inappropriately overlooked in the Israel-Palestine conflict, Israel killed over 230 Palestinians and leveled apartment buildings, utility infrastructure, and even a building housing the Associated Press and Al Jazeera. Such attacks cause lasting civilian harm in an area already struggling with infrastructure issues and violate international law.

Against this backdrop, the United States failed to effectively address the heart of the issue. Opting for “quiet diplomacy,” the Biden administration repeated one-sided rhetoric about “Israel’s right to defend itself” while conducting private talks with Israeli officials. In nearly every instance, Washington solely highlighted Israel’s point of view, offering vague statements on “equality” that did little to criticize civilian harm, the destruction of infrastructure, or the repression of Palestinians.

The unfortunate reality of this approach lies in its outdated nature. Washington has opted to fall back on old tricks, such as blocking a United Nations Security Council resolution (UNSC) on multiple separate occasions that would have condemned the violence on both sides and called for a ceasefire. U.S. administrations have for decades operated as a de facto automatic veto in the UNSC on anything deemed to be anti-Israel. The same is true for the United Nations Human Rights Council, where the United States is notorious for keeping Israel and itself distanced from language criticizing human rights violations.

That said, Washington also likely considered domestic factors in its approach. The Biden administration probably views any shift towards deeper criticism of Israel as a high-risk decision given the razor-sharp political margins in the U.S. Congress. Midterm elections rarely favor a sitting president’s party and Republicans would certainly smell blood should the United States opt for a harder line on Israel, which could threaten Biden’s highly valued and ambitious domestic agenda. Just as quickly rejoining the Joint Comprehensive Plan of Action with Iran has been difficult due to fear of political reprisal, so too does any perceived criticism of Israel—or worse—implicit support of Hamas.

The issue here, unfortunately, becomes one of politics. Rather than publicly condemn Israel for its many human rights violations, the United States simply glossed over the issue to avoid being drawn into a deeper level of engagement required to resolve the long-running occupation. Publicly pressing Israel and committing to conditioned aid would not only pressure Benjamin Netanyahu’s government to halt its malign activities but also squeeze regional states like the United Arab Emirates who signed the Abraham Accords. The current approach is immoral and fails to recognize how reputational pressure can be effectively applied to Israel, as well as Arab states with large pro-Palestinian street movements.

In recognizing this alternative path, the Biden team could have produced positive outcomes where decades of U.S. military, economic, and political support have not been properly applied for preferable and humane policy outcomes. With over 200 deaths, tens of thousands displaced, and widespread destruction in already impoverished Gaza, it is quite difficult to call quiet diplomatic efforts successful, especially when the situation on the ground essentially remains the same.

Herein lies the failure of “quiet diplomacy” in settings with obvious human rights violations. By blocking international pressure and refraining from tough language and actions, Washington enables Israel to continue committing violent acts against Palestinians—thus prolonging the occupation and violence. Additionally, it opens the door for justifiable criticism of Biden’s so-called human rights-based foreign policy. World leaders can rightfully point out that geopolitical and domestic interests once again reign supreme under a developing Biden Doctrine.

This level of complicity is causing the Biden administration to lose legitimacy on the global stage. Worse, complicity is an act of violence against Palestinians that prolongs the status quo in Israel-Palestine. This will only foster deepening ethnic resentment and violence as the Palestinian struggle becomes more desperate and far-right Jewish Power groups increasingly garner influence in Israel.

Ultimately, the world will remember decades of U.S. administrations turning a blind eye to human rights violations against Palestinians. The Biden administration was given another chance to prove its human rights-based foreign policy’s worth but rather chose to delay justice for Palestinians once again. Those in Palestine facing an apartheid state are rejecting the status quo and deserve more from world leaders with the ability to fight such basic injustices outlawed by international humanitarian law.