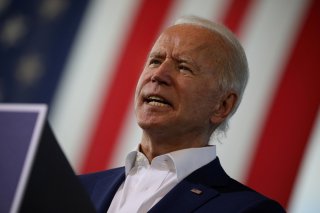 Joe Biden’s approach to the Iran nuclear issue and Iranian regional behavior is flawed. The former vice president is pursuing a strategy that defies logic and is informed by false assumptions. The realization of Biden’s strategy will threaten U.S. national security and undermine the advancement of U.S. interests in the Middle East.

The Democratic presidential candidate believes President Donald Trump’s withdrawal from the Joint Comprehensive Plan of Action (JCPOA) or the Iran nuclear deal was reckless. It repeatedly brought the United States to the brink of war with Iran. The decision contributed to volatility in the region. The withdrawal exacerbated U.S. relations with traditional allies.

Joe Biden wants to reverse Trump’s decision, stabilize the region, and improve relations with allies. A Biden administration will re-enter the JCPOA provided Iran returns to strict compliance with the deal. Re-entrance affirms a Biden campaign pledge to work with our allies. The former vice president campaigns on the belief that the resurrection of the agreement will be the touchstone for a new and improved Middle East. Re-entering the agreement will lead to negotiations on necessary extensions to the JCPOA and enable the curbing of Iranian regional behavior.

Biden’s strategy for addressing the Iran nuclear issue and Iranian regional behavior is tantamount to putting the cart in front of the horse. It is problematic for two reasons. Biden and his advisors presuppose the interests of allies and are concerned with the wrong allies.

Biden assumes the existence of resolve with JCPOA signatories and the maintenance of interests with our allies (i.e. the U.K., France, Germany, and the EU). The Biden campaign believes the signatories of the JCPOA will support and pursue the necessary extensions to the agreement. Biden and his advisors also believe that our allies will continue to uphold interests that coincide with U.S. interests regarding Iranian regional behavior.

History tells us that Biden’s assumptions are wrong.

A similar mindset and strategy were employed vis-à-vis Iraq in the 1990s. The Clinton administration attempted to maintain the cooperation of staunch allies while pursuing measures against Iraq. They failed.

The United States and the international community intended to disband Iraq’s weapons programs and contain the regime of Saddam Hussein after the first Gulf War. UN resolutions oversaw Iraqi compliance with destroying its weapons of mass destruction (WMD) and nuclear programs. A coalition of U.S.-led forces established a no-fly zone over northern Iraq to protect Iraq’s Kurdish population from Saddam Hussein.

France’s behavior regarding these measures with Iraq in the 1990s demonstrates that the United States cannot assume traditional allies will indefinitely maintain cooperation and support U.S. interests.

Throughout the 1990s, French companies invested and achieved numerous contracts to conduct trade with Iraq. For example, French oil company Total (partially owned by the French government), won the rights to develop one of Iraq’s largest oil fields in the 1990s. France also ignored sanctions on Iraq including allowing French commercial aircraft to fly into Baghdad.

The second problem with Biden’s strategy for Iran is the misguidedness.

Biden and his advisors argue that Trump’s withdrawal from the JCPOA damaged relations with staunch allies like the UK, Germany, France, and the EU. By re-entering the JCPOA, those relations will begin to heal. The act demonstrates prioritizing allies and partnerships over Trump’s “America First” approach.

Biden has it backward. He is concerned about relations with the wrong allies. He must worry about damaging relations with our allies in the Middle East. His vision of a more stable Middle East requires their cooperation and support.

Israel, Saudi Arabia, the UAE, and others view the JCPOA with trepidation. They are regularly threatened by Iran. Iran carries out aggression against them. Unlike Europe, they view Iran as an existential threat and witness Iranian proxies operating at their borders.

Re-entering the JCPOA is insufficient in their eyes. It does nothing to alleviate their fears. Nor has Biden’s support been very reassuring. Biden expressed a willingness to make Saudi Arabia a pariah and stop selling weapons to the kingdom. Furthermore, the signatories of the JCPOA have conflicting views of Iran’s regional behavior. For example, the United States and the EU differ over designating Iran’s Lebanese proxy, Hezbollah, as a terrorist organization.

Biden’s logic and current strategy toward Iran is defective. It is detrimental to U.S. relations in the Middle East and creates more instability. It is also likely to elicit the proliferation of nuclear weapons.

To ensure that history does not repeat itself and relations with our Middle Eastern allies do not deteriorate, Joe Biden must revise his logic and develop an alternative strategy for Iran. He must address the issue of extensions to the JCPOA and Iranian regional behavior alongside re-entering the agreement. In other words, he must negotiate a more extensive and comprehensive JCPOA that addresses the concerns of regional allies, not revive the original JCPOA.