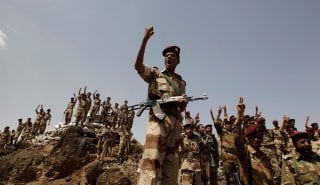 The Biden administration’s January 26 announcement of a temporary freeze of arms sales to Saudi Arabia and the United Arab Emirates (UAE) marks a major step towards peace in Yemen. At the same time, it only constitutes the beginning of a process to successfully disengage the United States and other regional actors militarily from the conflict. As a next step, Biden’s team should extend the freeze and extract meaningful shifts in behavior from both Saudi Arabia and the UAE to achieve foreign policy goals that save lives and ultimately end the conflict in Yemen.

Such an approach is no small task given the geopolitical underpinnings in the Middle East and North Africa (MENA) today. Yemen’s conflict began in 2014 as a civil war involving traditional rival factions between Yemen’s north and south, including the Houthi Movement (Ansar Allah), another Islamist group known as Islah, pro-government forces, and a southern-independent group known as the Southern Transitional Council (STC). It quickly evolved into a multidimensional regional proxy conflict involving Saudi Arabia and the UAE, in support of the pro-government and STC forces on the one hand, and Iran in support of the Houthis on the other.

Saudi Arabia and the UAE joined the fray out of fear of Islamists and Iranian influence over the Shia Houthi Movement. Given Yemen’s shared border with Saudi Arabia and proximity to the UAE, these states quickly determined that a decisive victory in support of pro-government forces was critical to their security. This proved to be a major strategic error, as it further pushed the Houthis toward Iran for support, split the various Yemeni factions into many other militant groups, expanded space for violent extremist groups like Al-Qaeda in the Arabian Peninsula (AQAP), and prolonged the conflict.

In the process of creating an almost intractable conflict, the parties to the conflict produced the world’s worst humanitarian crisis. Over 80 percent of Yemen’s population is in dire need of humanitarian assistance to survive. Over 14.3 million people are in acute need of aid today, with the Integrated Food Security Phase Classification (IPC) predicting that 47,000 people will face famine conditions by June 2021. This, alongside one of the worst cholera outbreaks in history, an ongoing COVID-19 pandemic, and decimated infrastructure are products of a manmade catastrophe caused by the fighting and the Saudi-led coalition’s sea and air blockade of the country.

The United States has contributed to the creation of this catastrophe since 2015 with both direct military operations, such as refueling Saudi-coalition aircraft, and arms sales under both the Obama and Trump administrations. Although ending the refueling program and most counterterrorism operations in Yemen in 2018, the Trump administration made major efforts to expand arms sales, nearly doubling the trend indicator value (TIV) of arms sales to Saudi Arabia during its tenure.

These actions culminated in the Trump administration’s efforts to complete major arms sales and solidify its prior actions in the final days of the presidency despite a push by members of the U.S. Congress to block the deals. They included $290 million in bombs to Saudi Arabia and $23 billion in drones and aircraft to the UAE. On top of this, the administration designated the Houthis to a Foreign Terrorist Organization (FTO).

The Biden administration’s freeze of these and other unspecified arms deals mark a major shift in thinking since the beginning of the conflict. The new administration wasted no time in its first week to announce the decision, in part to fulfill a former campaign promise by Biden to hold Saudi Arabia accountable for its actions. Yet while such a move should be applauded by those who have called for a tougher stance against Saudi-led coalition efforts in Yemen, it should also be viewed with skepticism.

In this regard, it is important to review similar actions by U.S. allies. Both the United Kingdom and Canada froze arms trade agreements with coalition members in the past, only to subsequently determine they fulfilled the legal requirements within their national statutes. Specifically, it was concluded by both nations that Saudi Arabia had significantly improved upon prior civilian harm metrics in a way that allowed for the resumption of arms sales.

Regardless of these conclusions, any rational analysis of the situation reveals that arms from these countries have harmed civilians both directly and indirectly. Local organizations within Yemen report instances of civilian harm from all parties to the conflict daily. Airstrikes are a leading cause of civilian harm and, in most instances, involve weaponry from the United Kingdom, Canada, Australia, or the United States. These are facts that cannot be ignored by opaque arms sale review and transfer processes.

Ultimately, these decisions to renew arms sales reflect a willingness of world leaders to prefer profits and geopolitical interests over humanitarian considerations. The Biden administration should break this pattern and has a legal obligation under international humanitarian law to remove the United States from any contractual obligation under prior agreements related to a prior administration.

Further, such sales violate the “Leahy Laws” outlined under the Foreign Assistance Act of 1961 (FAA), as amended, and the Consolidated Appropriations Act, 2014. Both laws operate as U.S. domestic statute that prohibits U.S. security assistance to foreign security forces that violate human rights.

Therefore, and as a next step, any review should ultimately conclude that that U.S. arms sales to any state or group operating in Yemen are illegal on domestic and international legal grounds. Such a conclusion will allow the Biden administration to leverage the arms sale freeze to pressure Saudi Arabia and the UAE to moderate their behavior and gradually work to establish peace in Yemen.

This initial review ultimately marks a major moment in the saga that is the war in Yemen. The review has constituted a point of exuberance in other countries, only to be followed by disappointment and a continuation of the status quo. The Biden administration can finally break this pattern and lead a path towards peace, and ultimately better days, for the people of Yemen.