Joe Biden Must Respond to Attacks By Iran’s Iraqi Proxies 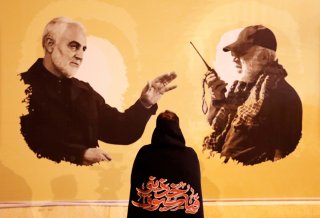 The various threats to American security interests posed by the Iranian regime were always going to be a serious test for President Joe Biden; the direction of the United States’ subsequent Iran strategy would be an early indicator of his administration’s foreign policy priorities.

Already this year there have been numerous instances of Iranian security threats which have so far gone unaddressed. This includes the announcement that Iran will proceed to enrich uranium to 20 percent, in its latest breach of the Joint Comprehensive Plan of Action (JCPOA).

Additionally, the hardliners in the Iranian parliament passed a law threatening to end additional short-term inspections from the International Atomic Energy Agency (IAEA) (in further breach of the JCPOA) from February 23, less U.S. sanctions are lifted immediately.

The possibility of a U.S. return to the Iran deal was always going to be an early priority since then-President-elect Biden announced his intentions back in November 2020. With the appointment of his Obama-administration colleague Robert Malley as Biden’s Iran envoy, the new policy looks set: diplomacy, not coercion.

However, last week’s deadly attack on U.S. forces stationed in Iraq by militia group Saraya Awliya al-Dam—widely assessed to be a front for the Iranian Revolutionary Guard Corps (IRGC) controlled Kataib Hezbollah—highlights that Tehran will forego diplomacy in favor of hostility. This is in order to exert additional leverage to bring the new U.S. administration back to the negotiating table—and this time on Iran’s terms.

In the short-term, last week’s attack on U.S. forces based at Erbil airport caught the United States off-guard. In the midst of attempting to seduce Tehran back to the nuclear deal, Secretary of State Antony Blinken and his team are afraid of calling out Iranian complicity, for fear of risking Iran’s cooperation. This attack was almost certainly sanctioned by Iran, if not directly ordered.

This situation is wholly counterintuitive to both American and British national security interests in the region. Kataib Hezbollah, a powerful Iranian proxy, was responsible for a similar indirect fire attack at camp Taji last March, killing two Americans and a British servicewoman. They were also responsible for the attack which caused a U.S. contractor’s death in December 2019.

Whilst Kataib Hezbollah and other powerful Iranian proxies continue threatening U.S. and British personnel in Iraq, last week NATO announced an increase from 500 to up to 5,000 personnel deployed to its training mission in northern Iraq. The British Army alone is expected to potentially triple its presence in the country as a result. This surge of British personnel will be an even bigger target for an Iranian regime intent on exerting maximum leverage in the run-up to any potential renegotiation of the nuclear deal.

Irrespective of potentially damaging Iranian sensitivities, both the United States and Britain need to call the regime in Tehran out for complicity in the Erbil airport attack last week. Saraya Awliya al-Dam—under the command of Kataib Hezbollah—immediately claimed responsibility. Refusing to acknowledge this reality will only further embolden the Iranian regime at what is undoubtedly a critical juncture for Biden’s Iran strategy, and foreign policy more broadly.

In addition to holding the Iranian regime to account for last week’s attack—something which Secretary Blinken and UK Foreign Secretary Dominic Raab both promised to do to the perpetrators—a renewed effort to bring Iranian compliance for nuclear non-proliferation should undoubtedly include robust measures put in place to curb Iran’s ballistic missile development.

While the break-out time for developing a nuclear weapon once Iran reaches 20 percent uranium enrichment (which they have assured under the guise of national sovereign law to implement from February 23 unless U.S. sanctions be lifted) is only a mere three and a half months, Iran will still require the delivery capability which will truly enable the regime to be a nuclear military power.

Only three weeks ago Iran tested a new rocket with improved technology which could be used in its missile program. The new Zuljanah rocket, developed to send satellites 310 miles into orbit, is easily transferable to Iran’s military missile program run by the Islamic Revolutionary Guard Corps.

Any renegotiation of the JCPOA by the United States must factor in the requirement to limit Iran’s ballistic missile program, and Britain will be instrumental in helping shape this policy with fellow JCPOA signatories. Curbing Iranian uranium enrichment is only one side of the nuclear coin; the other lies in restricting the ballistic missile program needed to operationalize a nuclear warhead.

Due to the consistent pressure which Iran is applying on the new administration, time is running out for President Biden to show a stronger hand needed to deal with this repeated Iranian aggression. This includes publically acknowledging the role in which Tehran has over sponsoring and controlling the Shia Iraqi militias which continually cause the biggest source of U.S. and British casualties in Iraq. With the recently announced significant uplift of NATO troops to Iraq, this is not the time for appeasing an aggressive Iranian regime.

Robert Clark is a Defence Fellow at the Henry Jackson Society think-tank in London, United Kingdom. Robert specializes in Arabian Gulf security and the trans-Atlantic alliance. Prior to this Robert served in the British military for 13 years, including serving in Iraq and Afghanistan.