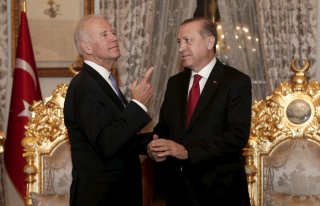 Take for example the former vice president’s views on the deterioration of U.S.-Turkish relations. During a discussion with the New York Times editorial board in December 2019, Biden revealed a willingness to interfere in the domestic affairs of a NATO ally. Biden called for supporting the Turkish opposition to President Recep Tayyip Erdogan in the next election. Turkey’s failure to fully integrate its Kurdish minority into the Turkish political process also received criticism from the former VP. The most alarming comment was the threat directed at President Erdogan. Biden stated: “Erdogan must pay a price.” In other words, Erdogan must be punished for the continuance of poor U.S.-Turkish relations and removed from office.

Joe Biden’s approach to U.S-Turkish relations is a textbook example of what not to do with a Middle Eastern ally.

The ideas of the Democratic Presidential nominee will not restore U.S.-Turkish relations. Instead, Biden will exacerbate distrust between two NATO allies, facilitate an increasing tendency toward authoritarianism in Turkey, and push Turkey toward other patrons. It will also damage relations with our other allies in the Middle East.

Turkish President Erdogan will be emboldened by a Biden presidency. Erdogan will grow stronger by using the perception of external interference in Turkish affairs to galvanize support and thwart attempts to reform the Turkish political process. It will enable him to crackdown on Turkish elements who appear to be receiving American support. This behavior is not unprecedented. Erdogan survived a coup attempt in 2016. In the weeks, months, and years following the failed coup, he purged thousands from the army, bureaucracy, and civil society.

Riyadh, Dubai, Cairo, Doha, Amman, and Jerusalem will take note of Biden’s attitude toward Ankara. If Biden is willing to interfere in the domestic politics of a NATO ally, he is also capable of meddling in their domestic affairs. This will make all of our allies in the Middle East more suspicious, more distant, and less cooperative.

What is shocking about Biden’s comments on Turkey is their eerie similarity to an episode of U.S.-Egyptian relations. Biden’s former boss President Barack Obama employed a similar tactic with Egypt. It failed miserably.

President Obama intervened in domestic Egyptian affairs in 2011. In the midst of the growing demonstrations of the Arab Spring, Obama put constraints on the actions of the Egyptian government vis-à-vis the protesters and expected major concessions from President Hosni Mubarak. The Egyptian president, a thirty-year ally of the United States and central pillar to the U.S. security architecture in the Middle East, did not meet the demands and was forced to resign. Mubarak, a keeper of the peace with Israel, a prominent collaborator on issues related to Iran, and a supporter of the American-led war on terror, was abandoned by Obama for a belief in human rights and realizing the will of the people.

Obama’s interference egregiously backfired. A military coup occurred after one year of democratic rule in Egypt and thousands were subsequently jailed, injured, died, or disappeared. The insecurity created by Mubarak’s abdication has led the current Egyptian president, Abdel Fattah el-Sisi, to harshly crackdown on any perceived opposition. U.S.-Egyptian relations have not fully recovered.

The abandonment of Mubarak also negatively impacted U.S. relations with regional allies. U.S.-Saudi relations suffered as Egypt was an ally of the kingdom and Mubarak was a close friend of the Saudi king. If Obama could force the resignation of Mubarak, he could abandon or force his will upon the Saudi Royal Family. The deterioration of U.S.-Saudi relations negatively impacted U.S. regional policy.

It is naïve to believe that this cooperation will be realized after U.S. interference in Turkish domestic affairs. Biden’s comments, and this kind of Obama-era thinking about relations with allies in the Middle East, need to be purged.

If elected president, Biden will have to walk back his comments and adopt more constructive measures if there is a future for U.S.-Turkish relations. A Biden presidency will need to prioritize U.S. objectives in the region and better understand the linkage of issues and developments. It must focus on what allies can provide, not only their shortcomings. If it fails to do so, things will go from bad to worse for the United States in the Middle East.

The Middle East is a challenging environment to navigate. Doing it without the assistance of allies is next to impossible. The example of Biden’s comments on Turkey demonstrates that a President Biden will need to be coached on how to better manage relations and ensure the realization of U.S. policy in the Middle East.