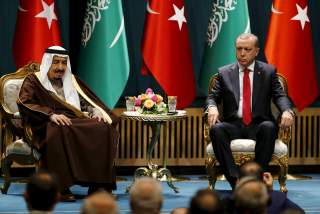 U.S. and Turkish forces trained throughout October to begin joint patrols near the town of Manbij, in northern Syria. Army Gen. Joseph Votel, commander of U.S. Central Command, said on October 21 that the patrols would begin soon. The next day General Votel arrived in Tanf, the U.S. base in the desolate area of southern Syria near Jordan and Iraq, where he stressed the importance of the base’s role in combating the Islamic State. The visit and the comments about Manbij are symbolic of the U.S. posture in Syria in general, as Washington remains committed to fighting the Islamic State (ISIS) but mission creep and its goals have led it to confront Iran and also try to deal with Turkish concerns.

Juggling multiple question marks about what comes next in Syria would be difficult under normal circumstances, but the Khashoggi affair, in which Saudi Arabian former insider and journalist Jamal Khashoggi was murdered in Riyadh’s consulate in Istanbul, has changed calculations about a key U.S. ally in the region. Saudi Arabia pledged $100 million in August to support the broad category of “stabilization” efforts in eastern Syria. Towards that end, the Syria Transition and Response Team, known as START, is coordinating a series of efforts under the U.S. State Department. Washington is deepening its involvement, a year after ISIS was defeated in the “caliphate” capital of Raqqa.

At the same time, U.S.-led Coalition forces and their Syrian Democratic Forces (SDF) partners in the Euphrates valley are facing tough battles against ISIS around an area called Hajin. Fighters on the ground are facing car bombs, up-armored vehicles and the usual ISIS tactics of festooning territory with IEDs. It’s a difficult battle and it has been going on for two months.

The United States also wants to confront Iran, and eastern Syria provides some leverage for a broader policy across the region. With sanctions kicking in on November 4, Washington wants to see its partners and allies on the same page. General Votel said on October 4 that while the main effort related to Iran is diplomatic and economic, there are things the military is doing in Syria that are “parallel, and they do support countering some of, Iran’s malign influence, not only in Syria, but also in the region.”

Paying for infrastructure that helps underpin stabilization and a continued U.S. role in eastern Syria appeared to be a goal Riyadh and Washington had worked out together. In March President Donald Trump indicated the United States would leave Syria “very soon.” Under National Security Advisor John Bolton the Trump administration has articulated a new stance which may entail remaining in Syria until Iran draws down its forces. Bolton said in Jerusalem in August that while defeating ISIS was one goal, worrying about “the presence of Iranian militias and regular forces” was another. The United States has sought to reduce funding for eastern Syria and encourage Saudi Arabia to do more. In short, this means outsourcing the financial side of eastern Syria to Riyadh while America maintains some military muscle on the ground and trains the SDF to do the rest. Saudi gulf affairs minister Thamer al-Sabhan visited eastern Syria in October 2017 and Trump asked Saudi King Salman for up to $4 billion for eastern Syria in December 2017.

Everything seemed to be going well for Trump’s Syria plan, and Riyadh’s role in the wider Iran policy in general until Khashoggi went missing. Now U.S.-Saudi ties are in a crisis with calls in Congress to reduce arms sales or chasten Riyadh. Amid the crisis Saudi Arabia quietly transferred the $100 million for eastern Syria, according to The New York Times.

Turkey is now debating how best to pursue the Khashoggi case, including how much pressure to put on Riyadh and Washington. U.S.-Turkish relations were greatly strained before the case broke, but the return of pastor Andrew Brunson and frequent calls between high level officials provide Ankara the chance to press the Washington for support. Manbij is one place Turkey wants joint patrols. Ankara has opposed the U.S. relationship with the Kurdish People’s Protection Units (YPG), which are a component of the SDF. Turkey’s Daily Sabah, which reflects the government position, reported on October 4 that the YPG would be removed from Manbij following the joint patrols. It referred to them as “YPG terrorists” and the Syrian wing of the Kurdistan Workers Party (PKK). Turkish pro-government media has characterized U.S. training of security forces in eastern Syria as a “30,000 PKK terror army” Turkish President Recep Tayyip Erdogan claimed the United States was “building an army of terror” in January.

This presents a dilemma. American partners in Syria are seen by Turkey as enemies while Washington and Ankara are seeking to do joint patrols. At the same time, Saudi Arabia is in the midst of a crisis at the precise time that Iran sanctions are kicking in and the United States wants more financing for Riyadh for eastern Syria. Both of these dilemmas provide Turkey and Saudi Arabia leverage. Yet the United States also can demand more support for Saudi Arabia in exchange for its alliance, and demand concessions from Turkey in exchange for exemptions on U.S. sanctions on Iran. This is possible as Turkish foreign minister Mevlut Cavusoglu said on October 24 that Ankara wants exemptions.

The drawing out of the campaign against ISIS in eastern Syria with an eye on staying in Syria until the Iranian presence is reduced has become a central policy of the Trump administration. Ironing out the details on how to do that with support from the Gulf, including the UAE, Bahrain and Saudi Arabia, while balancing Turkish demands, is the main challenge for the rest of the year.