Lebanon Demands Change after the Explosion—and the U.S. Should Help 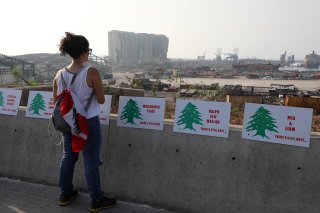 Some weeks ago, a great but far from unpredictable tragedy  befell Lebanon. The best explanation currently available for the Beirut blast that killed at least 190, wounded thousands and threatens to crush Lebanon economically, is that the country’s incompetent and corrupt government allowed 2,750 tons of ammonium nitrate to sit in the heart of the city’s port, “without safety precautions,” for years, after seizing it from a ship effectively owned by a Russian businessman.

One could be forgiven for being concerned about the potential connection between this massive stockpile of highly explosive material and Hezbollah, the terrorist organization which through its allies and brutal tactics effectively controls Lebanon. After all, in recent years Hezbollah has been caught storing ammonium nitrate in Germany, the United Kingdom and Cyprus—ostensibly (perhaps obviously) for use in terror attacks. Moreover, after the blast Israel’s Channel 13 reported that “Hezbollah apparently planned to use the ammonium nitrate stockpile… against Israel in a “Third Lebanon War,” and we’ve also since learned that Iran had sent 670 tons of the material to Hezbollah in 2013.

While there is an ongoing investigation into the blast, in the end, it doesn’t take an investigation to determine who is ultimately responsible for the long and taxing tragedy Lebanon has endured.

Years of malfeasance, corruption and confrontations with Israel on Iran’s behalf have made clear that Lebanon’s leaders, more correctly identified as Hezbollah and its allies, are uninterested in the welfare of the Lebanese people. Hezbollah is a terrorist army with three objectives: maintain its stranglehold over Lebanon, advance Iranian interests, and destroy Israel. Nothing apart from these “priorities” matter. And the results have been as disastrous as they were foreseeable.

Even before the blast, and before the spread of coronavirus, Lebanon was already in dire economic straits, with the World Bank projecting that nearly half the country would be below the poverty line this year. Less than two weeks before the blast, it was reported that Lebanon was “the first country in the Middle East and North Africa to suffer from rapid, runaway” inflation.

American policy towards Lebanon has been unhelpful, at best. Across successive administrations, the U.S. has provided billions in aid to the Lebanese Armed Forces (LAF) despite the fact that America’s diplomats and intelligence community know Lebanon’s leaders have failed to confront Hezbollah. This has made the LAF in effect an auxiliary to the terrorist group. Lebanon needs our help, but in this context, Lebanon is the people—not the willing accomplices to terror or the thugs they fear.

American aid should always help and never harm.  Accordingly, U.S. aid to Lebanon should flow exclusively through vetted non-governmental organizations, with no ties to terror or the Lebanese government. We should cut our losses and cease throwing “good money after bad” at the LAF.

Likewise, recent French proposals effectively empower the same corrupt Lebanese leaders who have profited off the misery of the Lebanese people and enabled the state to be taken over by terrorists.

Lebanon is at a tipping point. The blast in Beirut set off another wave of anti-government protests, and the Lebanese parliamentary government—all of whom were “selected by militant and political group Hezbollah and its allies”—has collapsed. President Michel Aoun, however, has not resigned, and Lebanon’s new prime minister has Hezbollah’s backing.

We must join the Lebanese people’s demand for accountable, non-sectarian, democratic regime change in Beirut. And all those who truly care about Lebanon’s future should demand that Lebanon be freed of Hezbollah’s, and therefore Iran’s, deadly grasp once and for all.

Grand declarations expressing condolences to the people of Lebanon have ephemeral value. Cutting off the financial lifeline to those responsible for the people’s plight is far better. But if in the coming months the Beirut blast becomes little more than a memory to those not directly affected by that explosion, it is likely that the current criminals and terrorists will be left in charge of Lebanon. If so, then unfortunately the next predictable and deadly tragedy will be just around the corner.

Sandra Parker is the Chairwoman of Christians United for Israel Action Fund.