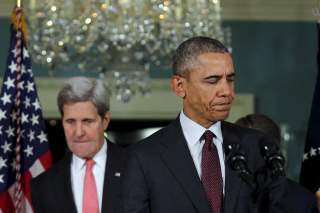 Tulsi Gabbard and Hillary Clinton have recently been trading shots over the question of regime change. The former Democratic candidate for president supported the Iraq War, convinced President Barack Obama to bomb Muammar el-Qaddafi’s Libya, and remains committed to the idea that overthrowing foreign governments should be a regular part of American foreign policy.

Few among establishment politicians and thinkers still defend the wars in Iraq and Libya. Nonetheless, interventionists have adopted a strange talking point. If Iraq and Libya show the dangers of regime change, they argue, then the war in Syria shows the dangers of inaction.

For example, Trump’s tenuous decision to pull out of Syria led many on the right to point the finger at Obama. According to Fox News pundit Buck Sexton, “[a]round 500,000 human beings were killed in Syria while Barack Obama was president and leading for a ‘political settlement’ to that civil war.” War hawks like Republican Senators Lindsay Graham and the late John McCain have similarly pointed to what they call Obama’s “moral failure” that resulted from his refusal to act. On the left, Shadi Hamid, of The Brookings Institution, recently argued that the “failure to confront Assad” was the “original sin” of the Obama administration.

Such discussions tend to take a simplified, moralistic view of the world. Bad governments do bad things because they are run by bad people. They can only be stopped through moral courage on the part of American leaders. If you care about innocent people being slaughtered, then you need to favor greater intervention abroad to remove evil governments, at least under certain circumstances.

International relations are rarely that simple. In this case, the interventionist narrative in Syria flies in the face of both the academic study of the causes of mass killing and the facts of American involvement. Indeed, a closer look shows that it was American intervention in Syria that, despite the intentions of decisionmakers, amounted to a policy almost tailor-made to create a greater likelihood of such atrocities.

R.J. Rummel has argued that the common feature across states that kill their own civilians is that they are almost all dictatorships. Yet modern work on mass killing starts with the assumption that, while dictatorship is common, large-scale murder of civilians is rare. Thus, what distinguishes the relatively few non-democracies that have killed hundreds of thousands of their people over a short period of time? A landmark 2004 study by Benjamin Valentino, Paul Huth and Dylan Balch-Lindsay found that the answer is a civil war, and in particular, guerilla warfare.

Defining “mass killing” as the purposeful killing of at least fifty thousand civilians over five years, the authors report that thirty out of forty-two such instances between 1945 and the time that they published their paper occurred during one of many civil wars. Looking at which civil wars include mass killings, they found that among the best predictors is the existence of guerilla warfare. Other studies have shown that poorer countries are more likely to engage in mass killing.

These results make sense when considering that, all else equal, most states would rather not commit atrocities against their own populations. Doing so can degrade the legitimacy of a regime at home and bring sanctions from abroad. It can also increase grievance, pushing normal citizens into the arms of the opposition. A government will therefore generally refrain from engaging in mass killing unless its rule is threatened and it sees no other options. If losing power means that a leader is likely to end up dead or at the Hague, then human-rights violations become that much more likely. Poorer states are less able to afford methods at subduing rebels that do not also punish the broader public. Richer countries, in contrast, can afford more high-tech surveillance, “smart bombs,” and quality training for military personnel that ensure that government efforts are aimed primarily at those that actually threaten the state.

Contrary to what Graham and other interventionists think, the United States did not “do nothing” in Syria. In fact, it did two things that should have made the wide-scale killing of civilians more likely. First, from the early days of the Syrian conflict the Obama administration called for regime change. In July 2011, a mere four months after the start of the uprising, American officials were already seeking to refer the situation in Syria to the Hague for prosecution, an effort that was finally vetoed at the UN by Russia and China in 2014. In other words, Syrian dictator Bashar al-Assad and his top officials were to be given the choice of either fighting or spending the rest of their lives in jail if they were not sentenced to death. Moreover, as early as 2012, the Obama administration, along with its Gulf allies, was arming Syrian rebels. But many of the weapons that were given to the rebels end up in the hands of Al Qaeda and other Islamists, some of which were theologically committed to wiping out the Alawites. This could only have increased fear among the regime and made it all the more desperate to stay in power no matter what the cost.

In addition to arming extremist Syria rebels and seeking regime change, much less remarked upon has been the economic siege that the United States and its allies have waged against the Assad government. In August 2011, President Obama signed an executive order that froze the assets of the Syrian state, banned any of its oil exports from coming into the United States, and prohibited any Americans from doing business with that country. While these sanctions and others that have followed include “humanitarian exceptions,” their practical effect is to deprive the Syrian public, sap the resources of the state, and hinder reconstruction. The theory behind sanctions is that they will lead to the overthrow of the targeted regime. In reality, “people power” cannot work to overthrow a government as long as that government remains in control of its armed forces and is willing to do what is necessary to survive, and states that meet such criteria will always be able to afford repression. Under such circumstances, the only questions are whether the government has enough resources to be relatively discriminating in who it targets and provide a decent standard of living for the part of the population that remains under its control.

The desire to punish actors committing atrocities is completely understandable. Referring the situation in Syria to the Hague, sanctioning the regime, and arming “moderate rebels” were certainly emotionally satisfying to leaders who wanted to feel as if they were “doing something” but did not want to commit to a full-scale military intervention. Yet these actions did not increase the security of the Syria people. Instead, they have likely made the regime in Damascus more brutal while impoverishing those that such policies were designed to help.

As has been pointed out by many on the right and the left, the American policy of regime change has been disastrous from both a humanitarian and national security perspective. Interventionists respond that “doing nothing” also has costs. While this may be true, in this case, such an argument amounts to a rewriting of the history of the Syrian civil war. There is something odd about a political culture in which trying to strangle a regime economically and arming its opponents, traditionally acts of war under international law, are seen as sitting back and doing nothing.

Opponents of regime change should address and reject the myth that the United States stood back and watched Syria destroy itself. In the end, regime change is not the antidote to mass killing. In fact, the academic literature suggests that inept policies are more likely to be the cause.