Making Sense of Pakistan’s Change of Tone with Saudi Arabia 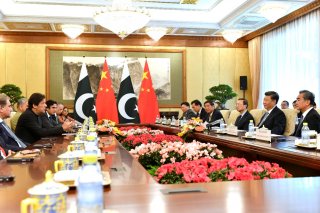 Recently, Pakistan’s foreign minister, Shah Mehmood Qureshi, strongly urged the Organization of Islamic Cooperation (OIC) to convene a council of foreign ministers meeting on Kashmir and Palestine, while criticizing it for its silence on atrocities being committed against Muslims. He went a step further and asked Saudi Arabia to play a greater and leading role in the Kashmir issue. He said: “Today Pakistanis, who are always ready to sacrifice their lives for Mecca and Madina, need Saudis to play a leading role on the Kashmir issue. If they will not play their role, then I will ask Prime Minister Imran Khan to go ahead with or without Saudi Arabia.” The remarks were made the very day Pakistan marked the first anniversary of India’s August 5 gambit that stripped occupied Kashmir of its autonomy, while vowing to never abandon the Kashmiris in their fight to self-determination. A day after, Pakistan repaid a $1 billion out of a $3 billion loan it secured in 2018, while Saudi Arabia stopped the supply of oil on deferred payment. These developments are being deemed momentous, given the central role and historic nature of Islamabad-Riyadh relations. There are two Kashmir-related reasons that could explain Pakistan’s strong messaging to Saudi Arabia, that could impact this all-important relationship.

The first reason relates directly to Pakistan’s support to the Kashmiris and the optics surrounding it. In that regard, all that is not only significant, but timely, too. That Pakistan demanded more concrete actions on Kashmir by one of its most dependable partners is an indication that the country is willing to ramp up its efforts for the Kashmiris, regardless of the potential costs involved. This could be Islamabad’s response to those who want it to play a more assertive role to help the Kashmiris. Pakistan has seemingly linked its somewhat stern communication with Saudi Arabia with the country’s national interests and the aspiration of its people.

The statements by top Pakistani officials are instructive in understanding how Islamabad has tried to establish this connection. Federal Minister for Information and Broadcasting Shibli Faraz, while thanking Riyadh for extending help at critical junctures, said that Islamabad, by virtue of being a sovereign country, will act in its national interests. Similarly, in its defense of Foreign Minister Shah Mahmood Qureshi’s refrain, the Pakistani Foreign Office enunciated that the people of Pakistan expected much more from the OIC. Taking such a position publicly makes sense for Islamabad. Pakistan has to assure the Kashmiris that the issue is of the essence to it, and that helping them is a core national obligation that cannot be shirked, come what may. In that respect, Pakistan’s tone and tenor has to be seen in tandem with the new political map that Prime Minister Imran Khan recently unveiled. The map, while showing the entirety of Kashmir as Pakistan’s territory, calls the portion of Kashmir across the Line of Control as “Indian Illegally Occupied Jammu & Kashmir.” Underlining the significance of the new map, Khan said that its issuance is the first stride towards Kashmir’s integration with Pakistan. Thus, Pakistan’s tough talk with Saudi Arabia has to be seen in the context of a series of actions that it is undertaking to vigorously fight for one of its principal vital interests: Kashmir.

The second factor that may have propelled Pakistan to implore Saudi Arabia to “do more” is China’s unremitting espousal of the country’s position on Kashmir. The day Islamabad expressed its reservations against Riyadh, Beijing successfully pushed for a United Nations Security Council huddle to discuss Kashmir, the third such meeting in the past year. Moreover, China’s own stake in the Kashmir issue has increased since India’s August 5 actions, with Chinese officials calling India’s tinkering of Ladakh’s status tantamount to an infringement of their country’s sovereignty. Pundits say that the ongoing standoff in Ladakh is a direct consequence of India’s brazen stratagems. China’s sovereignty conundrum, coupled with Pakistan’s acknowledgement of China’s position in its new map, is likely to germinate a stream of robust Chinese diplomatic support to Pakistan, something that the latter will count on in its long, arduous war with India in international fora.

Hence, Pakistan has a much-needed diplomatic and financial cushion to exert some pressure on Saudi Arabia, that even otherwise has been found wanting in lending impactful succor to Pakistan on Kashmir. It is noteworthy that Beijing deposited $1 billion in Pakistan’s State Bank the day the country returned the same amount to Saudi Arabia. This was a timely, strong, and outright reflection of China’s unwavering commitment to Pakistan. Last month, during Foreign Minister Qureshi’s visit to China, Islamabad received a strong message of support on Kashmir and one choosing an independent path in order to safeguard its national interests. At a time when speculations abound about Riyadh’s bidding for Pakistan, Beijing’s show of hand is reassuring and provides Pakistan some respite.

Islamabad should also take comfort from two concomitant factors. First, the China-Pakistan Economic Corridor (CPEC), the embodiment of China’s growing interests in Pakistan, has been resuscitated, with both countries signing some page-turning deals, recently. Second, newly-inaugurated CPEC projects are located in Azad Jammu and Kashmir, and the opening of roads on the Karakoram Highway shores up the importance of Gilgit-Baltistan for CPEC and China. Thus, there are many reasons for China to redouble its backing to Pakistan and preclude the deleterious effects that may sprout due to Saudi Arabia’s lackadaisical approach to the issue.

It is reasonable to assume that Pakistan’s ever-increasing commitments to the Kashmiris engender more pressures on it to take more firm stands in the diplomatic realm. The necessity of stepping up to the plate, coupled with the space provided by China to do so, is an incendiary force that has likely caused Islamabad to express its concerns about Riyadh. This phenomenon could be expected to frequently come to the fore going forward, as Pakistan tries to change gears on Kashmir.