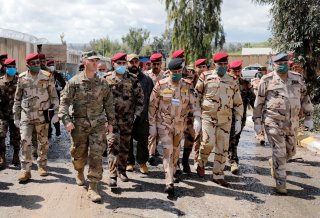 The Iraqi government’s curfew to check the spread of coronavirus has not prevented factions from the pro-Iranian Iraqi Popular Mobilizational Forces (PMF) from firing rockets at the American Embassy in Baghdad, as happened on March 26, 2020. In fact, on March 10, Khata'ib Hezbollah fired a volley of rockets at the Taj military base north of Baghdad, killing two American soldiers. Following a similar pattern, the Trump administration responded by striking five PMF weapons depots in Iraq.

This violent cycle of asymmetrical warfare, more or less intensified by the American assassination of Iranian general Qassem Suleimani in Iraq, reveals dangerous developments that have become the new matrix of the American-Israel-Iran relationship. Chief among them are: a) the U.S.-Iraq relationship has become precarious; b) the proxy Iran-Israel (and U.S.) asymmetrical warfare has become direct and capacious; and 3) the foreign policy objectives of the United States, Israel, and Iran have become strategically conflicted and clearly outlined. These developments constitute the ingredients of a new brewing regional war irrespective of the desire of concerned parties to avoid a war. Unless Washington and Tehran rethink their strategies, they are marching headlong towards a Middle East catastrophe coupling a ravaging pandemic with a devastating war.

The asymmetrical warfare between Tehran and Washington initially played out by proxy in Lebanon during the 1980s. Iranian Islamist proxies, which later on amalgamated into Hezbollah, bombed the American Embassy (twice) and the U.S. Marines barracks in Beirut in which 241 marines were killed. Taken by surprise, the U.S. and Israeli intelligence agencies, the CIA and Mossad respectively, cooperated in Lebanon and established that Islamic Jihad, a precursor faction of Hezbollah, was responsible and that its founder (and Hezbollah's future international operations chief) Imad Mughniyah was behind the terror bombings.

Reportedly, this cooperation led to couple of retaliatory attempts, including the 1985 car bomb attempt on the life of Hezbollah spiritual leader Ayatollah Muhammad Hussein Fadlallah, which resulted in eighty killed and scores injured in Beirut.

Eventually, Israel withdrew from Lebanon in May 2000. From the late 1990s to 2006, Israel maintained espionage cells in Lebanon whose contributions were at best mixed. The inconclusive 2006 Summer War between Israel and Hezbollah betrayed the failure of U.S. and Israeli intelligence to gauge the power of Hezbollah. General Qassem Suleimani, head of the al-Quds Force in Iran's Islamic Revolutionary Guards Corps (IRGC), supported by Mughniyah, oversaw Hezbollah’s military operations against Israel’s offensive in Lebanon.

Consequently, Washington and Jerusalem harnessed their collaborative efforts to curb Hezbollah's power. After so many years on the run, in February 2008, Mughniyah was assassinated in Damascus. As it turned out, the assassination operation was the product of close cooperation between the CIA and the Mossad. In response, Hezbollah’s leader, Hassan Nasrallah, declared an open war against Israel, focusing on enhancing Hezbollah's global militant reach. This marked a new dimension in the asymmetrical warfare.

At this juncture, cyberwarfare entered the fray of proxy war. In 2009, Stuxnet, a malicious computer program, sent Iran’s nuclear centrifuges wildly out of control. Concurrently, the Mossad reportedly pursued a wide-ranging operational policy to eliminate Iranian scientists involved in the country’s nuclear program. By the end of 2014, five Iranian nuclear scientists, the head of the country’s ballistic missile program, and the head of Iran’s cyber warfare program had been killed. The Iranian regime accused the Mossad of carrying out these assassinations, with support from American intelligence.

In the meantime, thanks to Suleimani’s military support, Nasrallah redrew the parameters of its conflict with Israel. In a speech on February 16, 2010, Nasrallah drew the qualifying framework for any future confrontation with Israel. He introduced the deterrent-by terror strategy where Hezbollah would retaliate proportionally to any Israeli aggression: "Tel Aviv for Beirut, and Ben Gurion international airport for Beirut international airport”. This marked a new development in the asymmetrical warfare whereby Hezbollah sought to achieve a strategy of terror parity with Israel. It’s noteworthy that a similar strategic parity policy, heavily reliant on missiles, had been unsuccessfully pursued by late President Hafiz al-Asad of Syria to contain Israel.

Simultaneously, Hezbollah tried to attack Israeli national interests overseas. Significantly, in July 2012, a Hezbollah suicide bomber carried out a terror attack on a bus in Burgas, Bulgaria, carrying Israeli tourists. Five Israelis and the bus driver were killed. In fact, Hezbollah’s operations would have been devastating had it not been for Jerusalem’s counterterrorism intelligence. The Mossad has been able not only to improve its human intelligence gathering but also to penetrate Hezbollah’s inner Jihadi circle, which analysts thought to be impregnable. By 2012, approximately one hundred Lebanese spying for Israel had been arrested by Hezbollah and central authorities. Most importantly, the Mossad recruited the head of Hezbollah’s Jihad External Operations unit 910, Muhammad Shawraba, charged with overseas operations against Jerusalem. This constituted a serious breach of Hezbollah’s internal security that brought the Mossad close to assassinating Secretary General Nasrallah.

In the meantime, Hezbollah became militarily involved in the Syrian Civil War on the side of the Assad regime, which heightened Israeli concerns about the Islamist party acquiring both military experience and sophisticated weapons, let alone creating a military presence in Syria similar to that in Lebanon. As it turned out, on January 18, 2015, Israel attacked an Iranian-Hezbollah military convoy apparently reconnoitering the Syrian Golan Heights. Senior Hezbollah and IRGC members were killed. In response, on January 28, Hezbollah launched six anti-tank missiles towards an Israeli convoy en route to Ghajar, a village saddling the Lebanon-Israel border, instantly killing two Israeli soldiers. This marked a new phase in the asymmetrical warfare reflected by Hezbollah’s plan to build a military infrastructure in Syria, thereby extending its front with Israel along the Lebanon-Syria border.

Although Russia entered the fray of Syria’s Civil War in support of the Assad regime and came to control Syria’s airspace, Israel continued its airstrikes in Syria. Obviously, Israel reached a broad understanding with Russia that allowed Jerusalem to strike at its enemies if they posed a threat to its national security, so long as Israel’s actions did not destabilize the Syrian regime.

However, Israel steadily grew concerned about Hezbollah and Iran’s growing military cooperation with Russia. This became doubly concerning for Israel when the Islamic State established a so-called Caliphate in both Iraq and Syria, which led the United States to create an international alliance to defeat ISIS. With the international focus shifting towards fighting ISIS, Tehran, Damascus, West Beirut, and Baghdad established a military strategic alliance, headed by Suleimani, to fight ISIS. This alliance birthed a strong regional Iranian proxy force comprising the IRGC, Hezbollah and the PMF. Israeli fears of Iran forging an overland military route connecting Tehran to Beirut became all but confirmed.

This became a high priority for Israel as Iran doubled its efforts to entrench its military presence in Lebanon, Syria, and Iraq in response to President Donald Trump’s policy of “maximum pressure” against Iran following his withdrawal from the Iranian nuclear agreement. In essence, Suleimani tried to establish a network of powerful proxy forces to deter and contain Israel. In a speech on February 17, 2017, Nasrallah warned Israel: “I call upon Israel not only to evacuate the Ammonia tank from Haifa, but also to dismantle Dimona nuclear facility.” And he added that “the Israeli nuclear weapon that represents a threat to the entire region, we will turn it into a threat to Israel.” This audacious warning reflected both Hezbollah’s growing arsenal of missiles and boldness in underscoring its deterrent-by terror strategy against Israel.

Israeli Prime Minister Benjamin Netanyahu consistently emphasized the danger of Hezbollah acquiring precision-guided missiles and members of his government threatened to take Lebanon back to the stone age in a future conflagration. Nasrallah, in an exclusive interview with the Al-Manar TV station in July 2019, warned Israeli officials not to brag about “returning Lebanon to stone age.” He asserted that “Hezbollah at minimum is capable of inflicting huge destruction upon the Zionist entity,” and added, “such a war will put Israelis on the verge of vanishing.”

It was against this background that both Washington and Jerusalem began to single out Suleimani. One could safely argue that the authors of Washington’s “Maximum Pressure” policy shared Israel’s concerns about Suleimani’s strategy of not only entrenching Iran’s military presence in Lebanon and Syria but also in Iraq. Soon enough, reports circulated that Israel on multiple occasions struck weapons depots in Iraq, controlled by the pro-Iranian PMF. In an interview with a Russian-language TV station, Netanyahu implied that Israel carried out the strikes in Iraq. He remarked that "I don't give Iran immunity anywhere," accusing the Iranians of trying to establish bases "against us everywhere," including Syria, Lebanon, Yemen and Iraq.

PMF officials harshly criticized and threatened the United States. Abu Mahdi al-Muhandis, deputy chairman of the PMF, accused the United States of allowing four Israeli drones into Iraq (via Azerbaijan) to target Iraqi military headquarters and declared that “the first and last responsible for what happened are the American forces.”