Nagorno-Karabakh: Why Turkey Is Sending Syrian Mercenaries To War In Azerbaijan 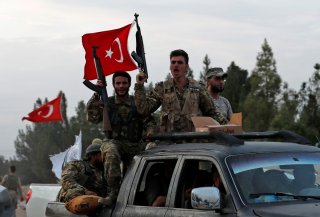 It appears that Armenia and Azerbaijan’s south Caucasus conflict is going international once again. Since last Sunday, September 27, the two nations’ militaries have traded blows over the disputed enclave of Nagorno-Karabakh, killing at least 100 people, including civilians. Armenia’s Ministry of Defense has claimed that the Azeri military is now employing long-range artillery and threatened to escalate its own military operations. Turkey and Russia have rushed in to support their preferred sides in the conflict, and Armenia has accused the Turkish military of shooting down one of its fighter jets and deploying Syrian mercenaries to fight on behalf of Azerbaijan, claims both nations have denied.

The allegation that Turkey has sent Syrians to fight in the Caucasus region is troubling, but not unbelievable. Turkey has long relied on proxy groups to stabilize its southern border with Syria as well as to push back on both President Bashar al-Assad’s regime offensives and the Syrian Kurdish YPG’s aspirations for autonomy and independence. Despite that Azerbaijan has denounced reports that Syrians are fighting on its behalf, and both Ankara and Baku are contending that it is actually Armenia who has brought in “mercenaries and terrorists” from abroad, media has been abuzz with evidence to the contrary.

For instance, The Guardian has revealed that a number of Syrian men have been recruited out of the northwest city of Afrin by a “private Turkish security company” to work as Azeri border guards, a claim that some observers have questioned since Baku already has a capable and well-armed military. Reuters also reports that it spoke with two Syrian fighters who were set to deploy to Azerbaijan from Afrin after speaking with an official from the Turkish-backed Syrian National Army. The men, who said they were promised a salary of $1,500 a month, lamented that they felt forced to go since “life is very hard and poor” in Syria. This recruitment process is clearly ongoing; Syrian journalist Hussein Akoush has said on Twitter that a Syrian man has already died after traveling to fight in Azerbaijan.

The Middle East and Eastern Europe are no strangers to the tried-and-true strategy of exploiting fighting-age men and shipping them off to war in foreign conflict zones. As part of its war against Ukraine, Russia has appealed to “patriotic” men living within the USSR’s former republics and has been caught hiring Serbians to fight on its behalf in the Donbas. Moreover, throughout the Syrian Civil War, Iran has pursued a callous strategy that has been dubbed “fighting to the last Afghan,” where Tehran offered a mixture of financial and political incentives—such as salaries, residency permits, or citizenship—to Afghan refugees and undocumented workers who were fearful of being deported. These Afghan men were then organized by Iran’s Islamic Revolutionary Guards Corps (IRGC) into the Fatemiyoun division, and the IRGC later reproduced this effort in Pakistan by recruiting Shia Muslim “volunteers,” the Zeinabiyoun, before sending both groups to fight for Assad in Syria.

Turkey, which maintains an ethnic and linguistic affinity with its “brothers” in Azerbaijan, has pledged its unwavering support for Baku, including by providing drones, arms sales, and technical expertise, following joint military exercises in August. Turkish President Recep Tayyip Erdogan’s decision to condemn Armenia’s “occupation” of Nagorno-Karabakh as “the biggest threat to peace in the region” makes the presence of Syrian mercenaries appear feasible. Although Turkey wants Azerbaijan to be victorious in this conflict, Ankara is likely to proceed with restraint, as overstepping could incite a harsh escalation by the Russian military. Much like Russia once sent “little green men” into eastern Ukraine, Turkey may be hoping that sending Syrians to fight in Nagorno-Karabakh will provide Ankara with a measure of plausible deniability while still demonstrating its support for Baku. After more than nine years of war, Syria's battle-hardened fighters are surely something that the Azeris can put to good use.

The possibility that the Armenian-Azeri conflict over Nagorno-Karabakh could become another opportunity for Russian and Turkish competition to turn violent should not be overlooked. The two nations already sit on opposite sides of both the Syrian and Libyan civil wars and calls for a new ceasefire have been incapable thus far of ending the fighting in all three conflict zones. Russia and Azerbaijan share a close relationship, but that pales in comparison to Moscow’s connections to Yerevan. Today’s Russian-Armenian alliance has grown out of a common religious heritage, a shared Soviet military legacy, economic integration in Russia’s Eurasian Economic Union, and solidarity in the Russian-led Collective Security Treaty Organization (CSTO), a six-party defense pact that has been called Eurasia’s NATO. Russia even operates an army base in Armenia’s northwest city of Gyumri.

Fortunately, Russia is said to be in constant contact with all the invested parties: Turkish, Armenian, and Azeri, increasing the chances that cooler heads prevail. “We call on all sides, especially partner countries such as Turkey to do all they can for a ceasefire and get back to a peaceful settlement of this conflict using political and diplomatic means,” Kremlin spokesman Dmitry Peskov said in a statement. Unfortunately, for now, the fighting will continue, and not even a ceasefire will bring permanent peace.

The roots of the decades-long quarrel over Nagorno-Karabakh began in 1924 when Soviet officials established an autonomous territory within Azerbaijan where 95 percent of the people were ethnically Armenian. Long-simmering tensions later boiled over into war when Nagorno-Karabakh’s legislature attempted to integrate with Armenia in 1988, and later declared independence after the Soviet Union collapsed in 1991. By 1994, Russia had brokered a ceasefire, but not until after the war had claimed the lives of nearly 30,000 people and created a thriving refugee crisis. Today, the conflict’s underlying drivers remain unsolved: Armenia still controls Nagorno-Karabakh and nearly 20 percent of the adjacent Azeri territory, producing a frozen conflict that has occasionally gone hot. The Organization for Security and Co-operation in Europe (OSCE) Minsk Group was launched in 1994 under the auspices of France, Russia, and the United States to resolve the standoff, but it has been unsuccessful in its mediation role.

Adam Lammon is assistant managing editor of The National Interest.