Is Netanyahu Pushing Israel Towards a War? 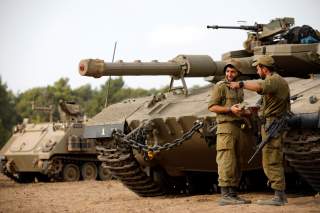 Much anxious talk is swirling these days over the prospect of a military showdown in the Middle East. A centerpiece of that war, we are told, is some form of military conflagration involving Iran and Israel.

To be sure, there are good reasons for concern. The United States’ violation of the Iran nuclear deal (JCPOA) and the illegal reimposition of sanctions on Iran have indeed nudged the region into uncharted territory. In Saudi Arabia, these developments are likely to have emboldened an ambitious, truculent, and remarkably inept, crown prince on a deranged power-trip. There are also real strategic incentives within Israel for confronting Iran militarily: it is no secret, for instance, that the acquisition of game-changing air-defense systems by Iran’s allies, e.g., Hezbollah, is disconcerting for Israeli military planners since this development compromises Israel’s near-absolute aerial supremacy. And then there is the person of Benjamin Netanyahu, who has now elevated gaslighting to an art form. As the noose of Israel’s judiciary tightens around the premier’s neck over corruption charges, the mere hint of a showdown with Iran, or any other foreign entanglement for that matter, must seem like a mouthwatering distraction.

These developments do indeed merit attention. But how likely is an all out war involving Israel on one side and Iranian (or Iranian-backed) military assets on the other? One approach for addressing such a question is to gauge the preparedness of IDF (Israel Defense Force) for both conducting and withstanding a sustained, intense and full-scale military assault. Israel’s 2006 offensive in Lebanon may offer revealing clues in this regard.

The summer 2006 war with Hezbollah, the highest echelons of Israeli intelligence agreed, had dealt “a critical blow” to the country and constituted “a national catastrophe.” But no sooner had the initial shock and bitterness of this defeat subsided than Israel’s military planners found themselves grappling with a far more pressing conundrum: despite the IDF’s prodigious supremacy in the skies and seas, thirty-three days of intensive fighting with Hezbollah had exposed a startling lack of preparedness among its ground forces.

Indeed, an Israeli inquiry panel charged with examining the conduct of the country’s military and political leadership during the 2006 war found that crucial to that defeat was the “flawed” performance of the country’s ground forces.

This was not lost on military experts, none of whom could be described as harboring the remotest ill-will towards Israel or its military doctrine.

“One of the [2006] war’s ironies,” observed a report by The Washington Institute for Near East Policy, was that “many’’ of Hezbollah’s “best and most skilled fighters never saw action, lying in wait along the Litani River [in southern Lebanon] with the expectation that the IDF assault would be much deeper and arrive much faster than it did.’’ The “biggest surprise of the war,” the study noted, was that the “vast majority” of the fighters who defended villages against Israel’s incursion into southern Lebanon “were not, in fact, regular [Hezbollah] fighters and in some cases were not even members” of the organization. “But the antitank teams that did see action,” the report further noted, were capable of inflicting “significant losses on the IDF.’’ Israel’s “ground forces,” found another U.S. Army study, “were tactically unprepared and untrained to fight against” the largely “conventional, fixed-position” defense conducted by Hezbollah. “Without question,” it further observed, the army was “confused,” and its soldiers were “deficient in training and equipment,” while “senior officers seemed woefully unprepared to fight a ‘real war.’”

The grim picture from 2006 does not constitute an unrepresentative snapshot of a particular moment in time. Indeed, if there were still any lingering doubts as to the worrying signs emanating from the IDF’s ground forces, they were pulverised beyond recognition in 2014, when Israeli troops were pitted against a foe whose military might paled in comparison to Hezbollah, i.e., Hamas. By the end of Operation Protective Edge, Israel’s intensive seven-week assault on Gaza in 2014, no reasonable observer could characterize the preparedness of Israel’s ground forces against Hamas militants as anything beyond woefully inadequate. Indeed, a telling paradox of the said operation was that Israel’s stated goal for having launched it was to quell “Hamas rocket fire,” which Netanyahu had dubbed “death from above.” In actuality, however, the ground warfare against Hamas militants would prove far more lethal than the “death from above”: military fatalities—and not “Hamas rocket fire”—accounted for ninety percent of Israel’s total death toll in Operation Protective Edge.

More than four years have elapsed since Operation Protective Edge; and yet “the doubts,” brooded Haaretz’s military analyst Amos Harel, “remain.” “What is the real state of the ground forces units?” he reflected perturbingly, “Is there a chance to close the gap between their effectiveness and that of the Air Force, intelligence branch and the technological units?”

In spite of what has been discussed thus far, it would still be a mark of folly to completely dismiss recent signs of remedial efforts on the part of IDF planners to address earlier shortcomings. But absent any indication of a seismic development in Israel’s capacity to conduct ground warfare, one is apt to conclude that today the country’s ground forces are unlikely to fare substantially better than they did in 2006, or, for that matter, 2014.

Israel and pro-Iranian military assets in the region may continue to exchange the occasional swipe and jab. But the more seasoned and level-headed members of the IDF’s top brass are fully cognizant of the real consequences of placing Israeli troops in the crosshairs of battle-hardened and formidable foes such as Hezbollah or Iran.

In other words, a war summoning the full panoply of Israel’s military might, including its ill-prepared ground forces, is unlikely to be in the cards, though one would never suspect this from listening to Netanyahu blustering about going it alone on Iran. He, and a defense minister who shares his knack for spine-chilling threats and metaphors, will have us believe that they are fully prepared—nay eager—for a cataclysmic war.

None of this is to cast doubts over Israel’s very real capacity to inflict large-scale devastation. (Indeed, even without its more than two hundred nukes, Israel’s aerial and naval supremacy over its rivals is almost absolute.) However, as Saudi Arabia’s embarrassing—not to mention ongoing—debacles in Yemen have amply demonstrated, it is possible to possess the most state of the art war machine with minimal operational or tactical relevance on the ground. Until Israeli military planners have addressed the gaping lacuna in their preparedness, it is difficult to take threats of an imminent full-blown war between Israel and Iranian-allied forces seriously. Until then, Netanyahu will have to either bamboozle a war-weary Washington into doing his bidding on the ground or launch high-intensity bombing raids inside Syrian or Lebanese territory.

For the time being, talk of a fully-fledged military conflict involving Israel seems somewhat premature. Unless, of course, miscalculations and unanticipated events metamorphose into an irreversible spiral of military escalation in the region.

Sajjad Safaei is a Ph.D. researcher in Germany.