The New Campaign to Convince Trump to Exit Afghanistan 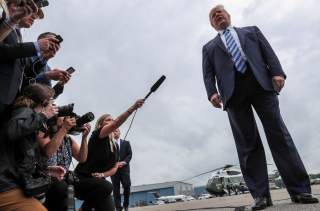 “Great nations do not fight endless wars,” declares the start of a new ad from Concerned Veterans for America. Only the speaker is not an anti-war agitator—the speaker is the sitting president of the United States addressing Congress.

The pull quote from Donald Trump’s State of the Union serves as the launching pad for a new television buy—around $200,000 on top of a $500,000 digital and mail campaign—to convince the president to, finally, end America’s longest war. “The president’s unique foreign policy message during the 2016 campaign was a key part of his appeal to an American public tired of endless,” William Ruger, vice president of foreign policy for the Stand Together Coalition, told me. “He would do the country a great service to withdraw all U.S. troops from Afghanistan. And it would also service him well in 2020.”

The ad notes that America has been mired in “eighteen years of conflict” and that “the war has cost the U.S. about $45 billion every year that we have been in it.” The pocketbook focus is tailored to a president who has long criticized an America taken advantage of overseas and in the midst of a generation of foreign policy failure. True to form: the ad will primarily run in Washington, DC and Northern Virginia, on both Fox News and the politically influential Sunday shows that Trump tends to watch.

The CVA effort is in partnership with Americans for Prosperity, a main arm of the Koch network.

Charles Koch has recently signaled an openness to supporting the president for re-election. Kochworld insiders insist that their apparatus has still worked very effectively with the administration despite public feuds with the president’s allies and even Trump. Championing criminal justice reform is poised to be a centerpiece of the president’s re-election effort; an alliance on foreign policy could be the next step.

The status of an Afghanistan withdrawal is uncertain. The president is the second consecutive occupant of the Oval to pledge an exit during his administration. But the recent scuttling of talks with the Taliban group—including a high-profile summit at Camp David—combined with the Wednesday appointment of the hawkish Robert C. O’Brien as national security advisor has left many observers wondering if a pullout is truly in the offing.

The fault lines of the debate are multifaceted. Some, including the Secretary of State Michael Pompeo, and his envoy, Trump emissary Zalmay Khalilzad has favored a partial drawdown ahead of a total exit at a later date, perhaps before the American election next year.

Critics of the administration’s approach on the Right like to argue either that the United States shouldn’t withdraw at all, or if America leaves, it shouldn’t ink a deal with the Islamist Taliban, granting credibility to the outfit that harbored Osama bin Laden. Some on the realist Right share this concern, too.

Alternatively, many who advocate exit are concerned about administration half measure. The president should exit—pronto—especially ahead of next year’s election. “Plans for full withdrawal have not been revealed and appear to be contingent on further talks with the Taliban or peace talks between the Taliban and the Afghan government,” Benjamin H. Friedman of Defense Priorities said. “That would be a mistake.”

The overriding administration concern, say current and former senior Trump officials, is that if the United States pulled out hastily or too soon before ballots are cast, hostile press coverage would potentially air footage of reprisals in the country executed by a vengeful Taliban. Particular attention has been paid to the status of Afghan women, given a chance in official society by the civilian government.

Former Secretary of State Condoleezza Rice has voiced such concerns and Trump tweeted warm words for Rice. “Very interesting and secure perspective on life,” Trump said. But, also on Fox News, there is a fresh reminder to Trump about why he was elected in the first place.

Curt Mills is the foreign affairs reporter at the National Interest, where he covers the State Department, National Security Council and the Trump Presidency.