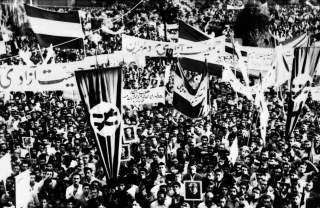 As foreign policy and national security increasingly become political footballs, a bizarre phenomenon has taken root in Washington that no matter what the outrage, pundits and press fall all over themselves to lay blame disproportionately on Washington’s doorstep, often without regard to historical accuracy.

The latest flare-up in U.S.-Iran tensions provides a case-in-point. Wholesale panic erupted after President Donald Trump targeted Qods Force chief Qassem Soleimani in a successful drone strike on January 3. #WWIII began trending on twitter. In Congress, politicians of both parties suggested that Trump’s actions were the opening salvo in a war against Iran, a premise that ignores both the killing of an American contractor and the attack on the U.S. embassy in Baghdad both of for which Soleimani was responsible. Even putting these aside, the notion that targeting Soleimani started a conflict would be a notion that hundreds of Americans and tens of thousands of Iraqis killed as a result of Soleimani’s plots would find curious.

More broadly, such self-flagellation is often based on a tendentious and inaccurate reading of history. NBC Foreign Correspondent Richard Engel, for example, tweeted, “If the US hadn’t used political intrigue and force to change a government in Iran it disapproved of in 1953 with the overthrow of Mosaddegh, Iran may have remained over time a US ally. But overconfidence and a lack of local understanding unleashed the opposite.”

A few points about which Engel appears ignorant. Firstly, Mossadegh was not the constitutional leader of Iran; the shah was. Mosaddegh was a populist who refused to step down when the shah sought to form a new government. This is why at the time, the 1953 action was referred to as a counter-coup rather than simply a coup.

Secondly, Engel reads Iranians out of their own history. In the Cold War parlance of the 1950s, there was a struggle between ‘the red’ and ‘the blacks.’ The ‘reds’ were those like Mosaddegh who were communists or leaned that direction. The ‘blacks’ were conservative clergy who opposed Mosaddegh’s populism. The genesis of the 1953 operation was the British dispute over nationalization of the Anglo-Iranian Oil Company operations and Mosaddegh’s subsequent willingness to negotiate. The Americans joined in alongside the ‘blacks’ and much of the Iranian military. While it is fair to question the implications of the 1953 coup, it is unfair to pretend that the clergy who now run Iran were any less culpable. It is also dishonest to ignore the context of the Cold War when the ouster of Mosaddegh occurred less than a decade after the Soviet Union sought a massive landgrab in northwestern Iran in the so-called Azerbaijan crisis.

Lastly, Engel highlights 1953 as the original sin but bizarrely ignores the fact that during World War II, American forces occupied parts of Iran; he and his fellow-travelers seldom explain why they believe Iranians reacted so angrily to Mosaddegh’s ouster when American troops occupied their country less than a decade before it.

Certainly, American policy did at times rub Iranians the wrong way. The shah’s growing autocratic nature also backfired, even though in the wake of 1953, much of the shah’s autocracy was geared to progressive reforms—the so-called White Revolution. In reality, if Engel and others want to find the driver for anti-Americanism, they might look toward the immunities which the American business community enjoyed in Iran during the 1960s and 1970s. Iranians grew extremely frustrated that employees of Bell Helicopters or Pepsi could claim immunity under the law when they injured Iranians in automobile accidents or other interactions. The clerical elite and the shah’s political enemies seized upon these grievances for a multitude of social and geopolitical agendas. Indeed, the questions of immunities for American soldiers in Iraq raised by pro-Iranian militias in Iraq reflect this psychological legacy.

There is much to debate in U.S. policy, but facile readings of history do neither the United States nor Iran right. Indeed, to suggest that 1953 drives current conflict not only is dangerous because it appears to justify any outrage men like Soleimani might want to commit, but it also condescending to deny Iranians agency and responsibility for their own actions.