The Oil War Is the Next Grave Risk to America 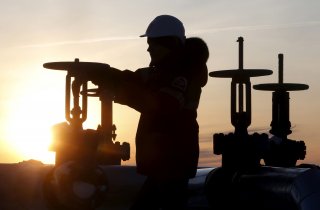 Last month, President Donald Trump took to Twitter to blame the then-30 percent plunge in oil prices—the worst drop in nearly three decades—on the spat between Russia and the Kingdom of Saudi Arabia over production levels (and so-called “Fake News”). During the early March meeting of the Organization of the Petroleum Exporting Countries (OPEC) and Russia (collectively known as OPEC-plus), Saudi Arabia demanded the cartel remove around a million barrels of oil per day from the global market—a deal contingent upon Russia itself cutting five hundred thousand barrels from production.

Russia balked at this suggestion, which was made amidst a slowdown in Asian energy demands due to the coronavirus. The impasse has turned the uneasy alliance between two of the largest oil-producing nations in the world on its head; in retaliation for refusing to comply, Saudi Aramco (the kingdom’s oil behemoth) will increase its output to a mind-blowing thirteen million barrels a day—a 26 percent increase from previous levels. Giving his own take on the news, Trump tweeted that the impending oil glut will be “good for the consumer.”

It also poses a grave risk to U.S. national security.

The day after Riyadh declared a price war on its former energy ally, WTI and Brent futures were trading at $34 and $37, respectively. After almost a month of both sides refusing to blink, futures began trading at less than $23. At those prices, American shale producers are well below the $40 level needed to cover direct operation costs. Saddled with debt, independent companies are bleeding cash as investors rush to sell their stakes in the firms. Without the necessary capital, drillers will be unable to explore, and any new projects will be shelved. Some industry players expect a number of operations to fold and tens of thousands of employees to lose their jobs. Ultimately, U.S. shale output could decrease by more than a million barrels a day. While this loss in American output was initially the Kremlin’s goal, Russia will not have the last laugh.

Instead, Saudi Arabia’s market share is likely to increase significantly. At only $2.80, the kingdom’s production cost per barrel of oil is the lowest in the world. While the United States imports a fraction of its overseas oil from its Middle Eastern partner—around 6 percent over the last few years—the Saudi government could wield its market share to have greater influence over the overall price of oil. The actions of Saudi rulers showcase their enthusiasm for this sort of influence: even as OPEC+ reached a deal to cut global production by a paltry ten million barrels early Thursday, the kingdom moved forward in dispatching seven supertankers collectively holding fourteen million barrels of oil to the Gulf Coast—a sevenfold increase in energy imports from last month. This balancing act—which sent prices plummeting nearly 10 percent on the afternoon the temporary truce was announced—clearly puts on display Riyadh’s distaste for substantive cooperation, even when it comes to a staunch ally like President Donald Trump.

Because oil markets are tightly integrated and globalized in nature, the whims of the ruling Al Saud family could prove acutely damaging to U.S. consumers, especially if global energy demand increases (as the U.S. Energy Information Administration believes it will) in tandem with production concentration. If, for instance, Riyadh wanted to cut production to force the price passed $80 per barrel (the country’s “breakeven” price), then gas prices in the states could skyrocket.

Such a scheme is not difficult to imagine. The country’s de facto ruler Crown Prince Mohammed bin Salman (or MbS) is currently underwriting what he views as a war against its archenemy Iran in Yemen, with existential stakes. After more than five years, the Saudi campaign in the now-failed state shows no signs of slowing down, and the Kingdom’s key allies in the fight (chiefly the United Arab Emirates) have washed their hands of the affair.

Less dramatic but just as essential to his legitimacy, MbS must find a way to continue the government’s traditional role as a nanny state (especially as the country grapples with a demographic crunch) while also funding his extremely ambitious Vision 2030 plan, which calls for the modernization of every aspect of the Saudi economy and relying less on oil to fund expenditures. It is the contradictory essence of these two goals that makes them so worrisome: the crown prince will go to great lengths to have his cake and eat it, too, even if it means isolating allies. He gives little thought to global opinion and international norms, as demonstrated by the brutal, extrajudicial murder of Washington Post columnist and American resident Jamal Khashoggi. Washington cannot and should not count on MbS as a stabilizing force in any sense of the word, especially when it comes to his country’s Achilles’ heel: energy.

Should MbS decide to cut production to boost prices in the short term, there is little reason to suggest that American producers could quickly bring extra barrels to the market and regain market share, as they have in the past when prices were high enough to justify exploration. But financial institutions are wary of lending to an industry already drowning in debt, with one major firm viewing energy as “a near-term risk.” The effect of such a precarious market arrangement (or lack thereof) will be devastating to U.S. firms: nearly one-hundred U.S. oil and gas companies are expected to file for Chapter 11 bankruptcy over the next year, according to the Houston-based law firm Haynes and Boone.

Because oil production operations are so capital intensive and have longer-than-average lead times, independent producers (which produce more than ninety percent of America’s oil) could find difficulties getting off the ground if banks are hesitant in exposing their balance sheets to the industry’s uncertainties. This is understandable: with greater market share, Saudi Arabia could quickly saturate the market with its cheap and easy oil, undercutting those American firms that could manage to get off the ground. With 1.5 to 2 million barrels in spare capacity on hand at all times, the kingdom could easily do just this. The only other countries with such capacity are Iran and Venezuela, both of which are targets of crippling sanctions implemented by the Trump administration.

We know this nightmare scenario is possible because it has happened before, and with dire consequences for the United States. During the 1973 oil embargo, when most international production was concentrated in the OPEC member states, prices quadrupled and the American economy was brought to its knees.

But the risks go beyond fuel rationing and mile-long lines of cars waiting to fill up at gas stations (though the White House has an incentive to avoid such measures, especially in an election year). The largest institutional consumer of oil is the U.S. Department of Defense, which counts on a steady, reliable supply of oil to fuel its operations around the world. If that supply becomes less certain or even just more expensive (at a time when American views of bloated military budgets are not exactly positive), then revanchist adversaries like China and Russia could move to capitalize on perceived American weakness in theaters like the South China Sea, Syria, Europe, and, in Moscow’s case, inside the United States.

Washington can take measures at home and abroad to ensure American economic and national security policy is not dependent on a thirty-four-year-old Saudi prince. Domestically, the Trump administration can offer cheap loans and temporary tax relief to major independent oil producers, which should help them to weather the coronavirus storm and the Saudi-Russian oil war. It could also reverse its stance on alternative sources of energy like solar and wind, and use the same financial tools to help their competitiveness (rather than trying to save the failing coal industry). Indeed, source diversification is perhaps the most pivotal weapon in the American energy arsenal.

Policymakers should have the same mindset when looking abroad. Though it would be a stark departure from the last three years, the Trump administration should open diplomatic channels with President Nicholás Maduro of Venezuela and President Hassan Rouhani of Iran. While the isolation of both nations is a hallmark of Trump’s foreign policy, it is no secret that the president likes to portray himself as a dealmaker and has previously signaled a desire to work with Tehran to forge a new JCPOA-like nuclear deal.

A self-styled champion of American oil companies, Trump could normalize relations with Caracas under the guise that he is doing so for the sake of American energy security and business. This claim would not be a stretch: Chevron, an American crown jewel, is the largest foreign producer of oil in Venezuela. As Maduro works to privatize oil extraction in the country, Trump would be wise not to cede any Venezuelan oil to a firm like Rosneft, the Russian state-owned oil company. More American firms should join the fray.

In order to guarantee American energy and economic security and preserve the U.S. national security agenda, policymakers should be wary of Saudi Arabia, an unreliable ally led by a prince with a questionable track record.