One False Move By Israel or Iran Will Lead to War 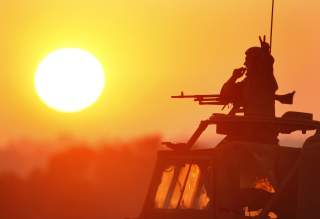 Israel has been monitoring Iranian entrenchment in Syria, weapons transfers that move to Iraq and also to Hezbollah in Lebanon, as well as Iranian-backed groups in Gaza. On November 12 Jerusalem put in motion operation ‘Black Belt,’ the attack on a senior Palestinian Islamic Jihad commander named Bahaa Abu al-Ata. He was a “ticking bomb,” Israel said after the operation, which led to 450 rockets being fired in retaliation from Gaza. There is another ticking bomb in Syria, where Israel struck numerous targets on November 20, a day after Iran’s Islamic Revolutionary Guard Corps fired rockets at Israel. One false move by Israel or Iran now could lead to a major regional war. Jerusalem must gamble on its precision airstrikes to deter Tehran.

“The Iranian attack towards Israel is further clear proof of the purpose of the Iranian entrenchment in Syria, which threatens Israeli security, regional stability and the Syrian regime,” Israel’s IDF said on Wednesday, November 20. The airstrikes were a major attack on the IRGC’s Quds Force, and also on Syrian air defense systems. Headquarters units, weapons warehouses, and bases were struck. Like in Gaza though, the airstrikes are not unique. Israel has carried out more than one thousand airstrikes in Syria. At the same time, Iran or Iranian-backed groups have sought to attack Israel with rockets and drones five times in the last two years. This includes a drone attack in February 2018, rockets fired in May 2018, a rocket in January 2019, rockets fired in September and on November 19.

Meanwhile in Gaza, the Iranian-backed PIJ has also been upping its rocket attacks. This included PIJ firing rockets in October 2018. It also involves both Hamas and PIJ firing more than 460 rockets in November 2018 and again in May 2019. Hamas and PIJ are both backed by Iran. PIJ has sophisticated rockets that can reach north of Tel Aviv and puts most Israeli large population centers at risk. It has a new rocket with a 300-kilogram warhead it revealed in the recent clashes.

Israel says that it wants to “stabilize” Gaza and create deterrence. Time will tell if that deterrence was achieved. Around two dozen PIJ operatives were killed, Israel says. Several civilians were also killed. But this is a major departure from past conflicts such as 2009, 2012 and 2014 in Gaza. Instead, Israel avoided a major ground operation and it has sought over the past year and a half to do just that. Not fight another war in Gaza. It understands that the major threat is in the north from Iran and Iran’s allies like Hezbollah. Israel’s Chief of Staff Aviv Kochavi warned in late October that the northern front and Gaza are “fragile” and that war could break out. Iran is a strategic threat, he reiterated. In the first week of November, Israel hosted CENTCOM head Kenneth McKenzie and US Air Force chief of staff David Goldfein visited Israel. Israel also hosted Blue Flag, an exercise with dozens of warplanes from Italy, Greece, the US and Germany, an advanced drill involving F-35s and simulating suppressing air defenses.

A timeline of Israel-Iran tensions illustrates the larger context. Over the last two years, Israel has warned about Iran’s entrenchment in Syria. But Iran has continued its role in Syria, and it continues to threaten Israel and transfer precision guidance to Hezbollah for converting its rockets. That would enable Hezbollah to threaten Israel in a new way than just firing rockets en masse at towns and cities as it did in 2006. It could mean an attack on Israel that looks more like Iran’s attack on Saudi Arabia’s Abqaiq oil facility in September. A recent U.S. inspector general report noted that Israel had conducted airstrikes in Iraq to prevent Iranian weapons transfers to Shi’ite militias. Israel warned about the precision guidance threat in late August after it conducted an airstrike on an IRGC-backed Hezbollah drone near the Golan Heights. Israel has made it clear it won’t allow sophisticated precision guidance to end up with Hezbollah and will work to interdict weapons flows. That has also meant suppressing air defenses in Syria, including an Israeli attack on an Iranian 3rd Khordad system in April 2018, according to an Israeli report. The 3rd Khordad system brought down the U.S. Global Hawk UAV in June over the Gulf of Oman.

Despite Iran’s setbacks at home, where it faces protests, and in Iraq and Lebanon where it also faces some civilian protests against its allies, it has increased its military abilities. That includes long-range UAVs and cruise missiles according to a Define Intelligence Agency report released on November 19.

For Israel, the knowledge of Iran’s threats is not the problem. Airstrikes on November 20 pinpointed an Iranian headquarters at the “Glass House” at Damascus International Airport and also another site at Mezzeh Military Airport in Damascus. Areas near the airport have been attacked before, due to weapons transfers that arrive there and go over the mountains to Lebanon. But more than one thousand attacks haven’t ended the Iranian presence or apparently deterred Iran. Instead, Iran and its allies feel they can continue to test Israel. Jerusalem says its November 20 attack was wide-ranging, against “surface-to-air missiles, headquarters, weapons warehouses and military bases.” However 440 kilometers to the east of Damascus, as the Albukamal crossing with Iraq, Iran is still constructing a base called Imam Ali that may house munitions or other ordnance. The site was attacked in early September, but it has not deterred Tehran. In the opposite, IRGC head Hossein Salami said destroying Israel is an achievable goal on September 30.

The picture that emerges from the clashes between November 12 in Gaza and November 20 in Syria is that Israel has sought to use precision strikes to stop Iran and its proxies. It has avoided a major clash with Hezbollah or with Iran itself. Jerusalem has been bold in its strikes, and Iran’s allies accuse Israel of attacks in Iraq and sending drones to Beirut. So long as the attacks that are more well known, such as in Syria, take place without large casualties, there has been no major reaction or spillover. For instance, the attacks on November 20 caused only a few casualties. The Iranian-backed rocket fire on November 19 was intercepted by Israel’s Iron Dome air defense. Other incidents may have taken place as well. Syrian media claimed that Israel killed a PIJ operate on November 12 in Damascus and other Arabic media have reported similar incidents that cannot be confirmed.  So long as the conflict remains in the shadows with “plausible deniability,” Iran can save face a bit. Similarly, Palestinian Islamic Jihad could claim some kind of victory on November 14 for firing 450 rockets at Israel and surviving mostly intact.

The major question, especially as Israel’s Prime Minister Benjamin Netanyahu has been unable to form a new government for almost a year amid two elections, is if the small wars in Gaza and Syria will become a larger conflict. Such a conflict could affect the entire region. The Houthis in Yemen view Israel as an enemy and also view the United States and Saudi Arabia as adversaries. The Shi’ite militias have increasingly blamed both Israel and the US for problems in Iraq. CENTCOM has assessed that Iranian-backed forces might target U.S. military personnel “if they view the US as complicit in Israeli strikes on [Iran’s] forces in Syria.” That means Israel and Iran both walk a tightrope in the rising tensions. Israel, Gaza, Lebanon, Syria, Iraq and Yemen are all attached to that tightrope. For two years more than one thousand airstrikes have hit Iranian targets in Syria, dozens of rockets and drones have been used from Syria against Israel, drones have targeted Hezbollah in Lebanon, anti-tank missiles have been fired by Hezbollah and more than two thousand rockets have been fired from Gaza, all without a major war breaking out. Yet, both Iran and Israel assess that they are heading towards a larger conflagration.