Only America And Turkey Can Save Syria's People From Coronavirus 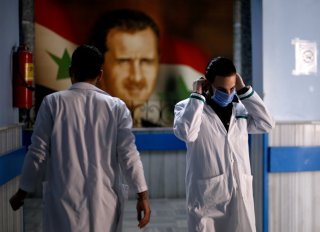 Nine years after the beginning of the Syrian Revolution, it’s now clear what my country has become. Syria has turned into a permanent war zone and a project for foreign nations to project their own foreign ideologies. As at no other time in its history, Syria is defined by economic weakness and steadily increasing fatalities. It has become the world’s political intensive care unit, as ever as deadly as any plague—while the world has perfected the art of international silence.

How did this happen? The answer is both simple and complex: from the outset of the conflict, the Assad regime determined that it would sacrifice whatever numbers were necessary, including its own supporters, to ensure its survival. The political & military oppositions played into this strategy, albeit without purposeful complicity. At a key point in the conflict, the opposition determined that they would accept help from anyone, no matter how violent or suspect. The result was that the opposition lost its ability to unite the country by only looking out for themselves—sacrificing their legitimacy and, eventually, tens of thousands of Syrian lives, while the regime solidified its position and escalated the amount of damage it was willing to inflict on the country as a whole.

The Syrian people, whether in regime-controlled areas or in opposition-controlled areas, are incapable of changing this reality. After nearly a decade of war, what is happening on the ground now in Syria is no longer a revolution by the Syrian people, who hope for a better future. Instead, the Syrian Civil War has become a foreign-fueled proxy war: a conflict in which contending feuds among competing foreign dictators are played out inside a nation already on life support. The bottom line: both regime-backed and proxy groups claim to represent the Syrian people—they do not.

As should be clear to all (and is quite clear to the international community) this set of circumstances will remain unchanged into the near future. It will remain unchanged until Syrians are able to establish a group of independent national leaders that eschew all foreign help—no matter how well-meaning said help may be—if it does not fit the Syrian national agenda and the aspirations of Syrian people as a whole (yes, there is currently not a unified Syrian agenda). Until that time, Syrians can only hope that the countries closest to the Syrian conflict are working for its end and that they will deal with the crisis in a way that serves both their interests and those of the Syrian people.

Unlikely as it seems, and speaking as a Syrian, I submit there are only two possible candidates that fill that requirement—Turkey and the United States. Turkey has shown itself as militarily capable of countering the military forces of the Syrian regime and, despite months of deployments in northern Syria, remain a potent military force on the ground. Turkey's dealings with Russia, and between President Recep Erdogan and President Vladimir Putin personally, have made it clear that the primary motive of Turkey is to keep the Syrian forces from entering Idlib—and therefore keeping millions of desperate Syrians from crossing its borders. So too, the United States has consistently shown itself capable of interventions (no matter how modest) that support Syrian minorities, while targeting the worst extremist groups, and indeed secure their national security interests in the process. Lest we forget, the United States and Turkey are a bridge to the nations of the NATO and the European Union—who have an interest in seeing an end to the fighting.

Both the EU and the United States have backed Erdogan’s moves in northern Syria, seeing them as a necessary counter to the eventual victory of the Assad/Putin axis. Surprisingly, the Turkish-EU-U.S. program has proved workable, as it has brought to an end the large scale exodus of Syrian refugees from the northern part of the country. Moreover, the recently negotiated March 5, 2020, agreement between Turkey and Russia successfully halted military activity in northwestern Idlib Province, providing a necessary break in the fighting while allowing the mounting of badly needed humanitarian missions. Although this agreement is lopsided and has resulted in the permanent loss of the opposition-held territory required to sustain such a large, tightly packed population.

It is essential that the United States and Turkey continue to play a role in Syria, particularly now that a new enemy—the coronavirus—has appeared on the scene. The pandemic now threatens seven million Syrians in northern Syria, a region where medical and rescue services are simply unavailable. The spread of this pandemic, on-the-ground medical observers predict, could make what is going on in China or Europe look modest in comparison with what might well happen in Syria. To make matters worse, and despite the clear progress made by the winking and unofficial U.S.-Turkish alliance, this part of the country is ruled by organizations and people who reflect the extremist ideologies that have destroyed the fabric of Syrian society.

The coronavirus provides a new challenge for the U.S. and Turkish position in Syria, but it also clarifies what must be done. In order to stop the virus, the American and Turkish governments must implement programs that will return Syrian refugees to their homes in Syria, albeit under the protection of the U.S. and Turkish militaries. Turkey, in particular, should consider new ways to implement its recent agreement with Russia so that the policy adopted ends the flight of Syrians beyond Syria’s border—while protecting Syrians from the guns of the regime and its Russian supporters. Putin must know this: the pandemic’s spread undermines everyone’s role in Syria, including his own. More simply, Turkey (supported by the United States and European Union), should announce their desire that the ceasefire agreement reached with Russia on March 5 be extended to include a no-fly zone that applies to all parties. The United States should also help Turkey to get rid of HTS and other terrorist groups in northwestern Syria. These steps would encourage those displaced by the conflict to return to their homes—and allow humanitarian organizations, NGOs and independent Syrian medical organizations to access areas that will inevitably be affected by the COVID-19 virus.

At the same time, the international coalition to defeat ISIS must persuade the Syrian Defense Forces (SDF) that it is in its long-term interests to sever any remaining links with PKK leadership and chart a politically independent path for northeastern Syria that does not further involve this ideological movement. Failure to do so means that international relief agencies will be unable to service areas that are bound to be hit hardest by the pandemic. The goal would be threefold: to establish a mechanism of cooperation among all provincial leaders in northern Syria on political questions away from pre-existing ideologies; to integrate projects of each province for increased economic welfare and healthcare to the citizenry; and finally, and most crucially, to seed a mechanism for dealing with what will soon become a health crisis that could take hundreds of thousands, or even millions, of lives.

Bassam Barabandi is a former Syrian diplomat, and cofounder of People Demand Change. He can be followed on Twitter at @BBarabandi