OPEC Oil Spats Will Not Fracture the Saudi-Emirati Alliance 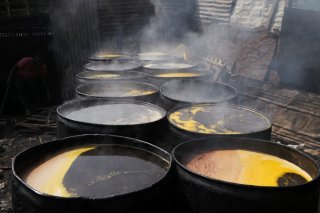 Amid a flare-up of Organization of the Petroleum Exporting Countries (OPEC) tensions last week, there has been rampant speculation on the supposedly fractious nature of the Saudi-Emirati relationship. We have heard prophecies of a breakdown in the long-standing alliance over the disagreement on production quotas. These predictions of demise are considerably premature and overlook the considerable range of issues these two countries have and continue to align on. It will take far more than a minor dispute over oil to shatter decades of friendship.

OPEC is an organization that has seen more than its fair share of arguments over the years. Barely a meeting goes by without reports of at least one member taking issue with another. When the press sensationalizes these flare-ups, it is often forgotten that the entire point of the organization is for differences to be aired and disagreements to be addressed in a structured manner. If OPEC and other alliances simply folded every time delegates around the table failed to see eye-to-eye, it would not have lasted a week. For those playing up this latest dispute as triggering a major break in Gulf relations, they will more than likely prove to be disappointed.

The dispute in question centers on oil production quotas, which has rumbled on since Saudi Arabia and Russia, the organization’s two biggest producers, agreed to a deal that would limit output in June last year. The United Arab Emirates and others were reluctant adherents to the deal, given the agreed baselines failed to reflect the advances made in their production capabilities. The latest flare-up was played out more visibly than might otherwise have been expected.

However, to see a more permanent fracture emerging is misguided. These are two countries that have and continue to be united on the major political issues facing the region today. Concerns around Iran’s funding of terror, countering extremism, and boosting economic diversification in this oil-dependent corner of the world are just some of the major topics these countries remain in firm lockstep on. Those are more than enough of a basis for a strong partnership to endure.

It is characteristic of any occasion where disagreements within a multilateral institution arise that speculation of its demise becomes rife. The United Nations Security Council has faced numerous supposed prophecies of its downfall, without there ever being a realistic prospect of that being the case. The same is very much the case here and, in fact, highlights the entire purpose of these organizations in the first place.

The very nature of cooperation on oil production means technical disagreements and disputes are inherent in any plan of action. It’s tempting for some to think of the Gulf-based oil-producing members as one homogeneous block with similar goals, ambitions, and production capabilities. However, this simply isn’t the case. The Saudis, for example, have considerably larger production capabilities than their neighbors. This means it will have a greater advantage when demand for oil begins to decline as renewables take off in earnest.

This highlights how this flare-up, despite the will of some commentators to see it as a hotly disputed disagreement between two close allies, is in fact centered on technical differences. Imagine if other global alliances, such as those between the United States and Canada or Australia and New Zealand were to fracture over technicalities around wheat exports or cattle-rearing. It simply does not reflect the reality of alliance-building and international relations.

Prophets predicting the decline of the Saudi-Emirati alliance would do well to heed this. This is a relationship based on shared security, diplomatic, and cultural interests spanning decades. It is not going to be undone by one heated OPEC session. I suspect that those out there talking up the possibility of a fracture know this but are simply keen to stoke up political drama where there is little to be had. It will take considerably more than a technical disagreement over oil quotes to break one of the Middle East’s most enduring partnerships.