Overfunded and Under Governed: Why Jordan's Economy Is Struggling 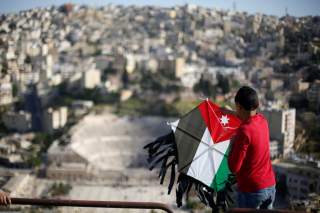 Like putting a Band-Aid on a gunshot wound, Jordan traditionally uses foreign aid to alleviate its short-term problems without addressing the root causes of its economic issues. Following the Arab Spring in 2011, Jordan reportedly received over $10 billion dollars in foreign aid. Despite the generous donations that Amman receives, it still struggles with an economic crisis fueled by a national debt of nearly $40 billion, an 18.5 percent unemployment rate, a debt-to-GDP ratio of 95 percent, and an average per capita income of $5,213. Jordan’s financial woes are coupled with its absorption of millions of refugees from neighboring war-torn countries, which have cost the Kingdom an estimated $6.6 billion from 2011 to 2016. International donors must work closely with Amman to develop a robust, self-sustaining economy and help promote its long-term stability.

The Kingdom’s economy has not always been in bad shape. In fact, Jordan’s GDP growth from 2000 to 2009 averaged 6.5 percent annually. However, a combination of the global financial crisis in 2008, Arab Spring disruptions in 2011, the closure of borders with Iraq and Syria (a vital source of Jordan’s exports), a large absorption of refugees, and a decline in remittances led to Amman’s current economic woes.

The Jordanian government, however, is not ignorant of its economic problems and recently introduced a series of ambitious plans to strengthen its economy. In May 2015, King Abdullah II and then-Prime Minister Abdullah Ensour launched “Jordan 2025.” The plan, also referred to as “Vision 2025,” serves as a blueprint to transform Jordan’s economy and society. It includes a number of goals such as increasing the GDP growth rate, reducing unemployment, and lowering the poverty rate. The plan acts as a general outline while accompanying programs provide specific details on achieving the goals of Vision 2025.

In support of JEGP, former Secretary of State Rex Tillerson visited Amman in February 2018 where he signed a MoU pledging $6.375 billion for FY 2018–2022, a $275 million annual increase from previous agreements. The new MoU includes a minimum Economic Support Fund—money designated for direct budgetary support of the Jordanian government—signaling that the United States views Jordan’s economy as paramount for the security of the Kingdom. Secretary Tillerson explained that the MOU is intended “to support His Majesty King Abdullah’s political and—importantly—his economic reform agenda and move Jordan closer to achieving the self-reliance that it seeks.” While the aid is not enough to solve Jordan’s problems, it should serve as a model for other international donors. Senders of foreign aid must work closely with the government and set up key performance indicators to ensure their money is contributing to improving Jordan’s economy, not just keeping the country afloat.

The international community was reminded in late May 2018 of Jordan’s fragility, despite its history of resilience in a region rocked by turmoil. Starting on May 30, thousands of Jordanians flooded the streets of Amman and other provincial towns protesting against International Monetary Fund-driven austerity measures and a proposed new tax law. The law—which still needs to be approved by Parliament—would increase the number of taxed citizens from 4.5 to 10 percent and raise tax rates for banks from 35 to 40 percent, among other changes. These reforms are significant to Jordanians, especially for the over 4 million citizens (42 percent of the total population) who live in Amman, the most expensive city in the Arab world.

The protests led to the resignation of Prime Minister Hani al-Mulki, who was subsequently replaced by Education Minister, Omar al-Razzaz. Razzaz postponed the new tax law, viewed as a good faith effort by the new minister. The resignation of Mulki is noteworthy, however, this action could be attributed to an unofficial strategy in Jordan in which prime ministers are used as shock absorbers for angry citizens. A recent study demonstrated that Jordanian prime ministers and their cabinets are typically short-lived, lasting on average 309 days. During periods of protests, they are cut even shorter averaging less than one hundred days. The country is designed to survive, not thrive, which inevitably has led to periodic protests due to its poor economic and political structure.

In response to the protests, Kuwait, Saudi Arabia, and the United Arab Emirates pledged to provide Jordan with $2.5 billion in aid. While the money is helpful for the cash-strapped country, many Jordanians feel that the assistance is not going to save the Kingdom from its economic problems and crippling public debt. In 2012, following the eruption of the Arab Spring protests, the Gulf Cooperation Council (GCC) sent a $3.6 billion five-year aid package to Jordan. However, GCC assistance to Jordan dried up in early 2017.

The new pledge is problematic for several reasons. First, the aid package is significantly smaller ($1.1 billion less) than the previous one. Secondly, Jordanians fear that there may be ‘strings attached’ to the money. Bruce Reidel, a senior fellow in Middle East Policy at the Brookings Institution, said that for the Saudis, “the new Mecca aid package is both a means to stabilize Jordan and to leverage it.” Saudi Arabia and the other Gulf nations may be using this money to influence Jordan to align itself with their regional goals, including the GCC’s feud with Qatar, Israeli-Palestinian peace negotiations, and Saudi Arabia’s proxy conflict with Iran. Lastly, Jordan did not receive aid from the Gulf for over a year in between pledges. It is vital that aid be consistent, predictable, and without political expectations.

A recent study conducted by DAI, a private development company based in Maryland, found that an increase in foreign aid to Jordan by $100 million would lead to a 1.3 percent increase in jobs while an increase in one thousand Jordanian home-grown companies would yield a 1.93 percent increase in jobs. This study demonstrates that while all assistance is useful for Amman, targeted foreign aid backed by data can more effectively produce the help the Kingdom needs. International donors can best contribute to Jordan’s economic growth by aligning their foreign aid with JEGP’s stated goals including developing public-private-partnerships, stimulating and enabling the business sector, facilitating trade and employing refugees. A report produced by Oxfam in 2017, an international charity organization, recommends that international aid must be predictable in order to allow for Jordan to plan effectively and to allow for its citizens to hold the government accountable. In the past decade, Oxfam found that overseas development assistance to Jordan has been unpredictable, often fluctuating during periods of instability. Further, the report recommends that aid should be more transparent, include proper monitoring and evaluation capabilities, and involve consultation with the local civil society and communities that the aid is designed to benefit.

Throughout its struggle, Jordan adopted a model where it trades geopolitical importance for aid, allowing it to endure. Amman has taken advantage of its strategic location, nestled between Saudi Arabia, Iraq, Syria, Israel and the Palestinian territories. Western and Gulf nations have a vested interest in supporting the Hashemite Kingdom due to its proven record of maintaining regional stability. If donors want to continue to benefit from Jordan, then it is crucial that they work closely with the country to ensure that its economy does not simply survive but becomes self-sustaining.

Daniel Levin is the 2018 Middle East fellow at Young Professionals in Foreign Policy. Prior to this, he held positions with the Albright Stonebridge Group, the Pew Research Center, and the Atlantic Council. Before moving to Washington, DC he spent a year abroad in Jordan studying Arabic as a David L. Boren scholar. He earned his BA in political science from the University of Illinois in Urbana-Champaign, where he also minored in Arabic and Global Studies.

Image: A boy flies his kite decorated with the Jordanian national flag during an event celebrating spring at the Citadel in Amman, Jordan, April 15, 2016. REUTERS/Muhammad Hamed