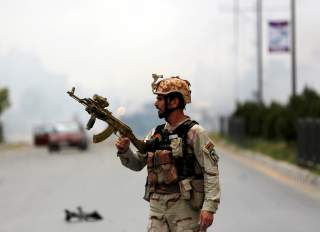 The Saudi-Iranian rivalry is a source of tension in the Middle East.

In Yemen, Saudi-backed government forces and Iranian-backed rebel forces are hostile to each other. In Syria, the Iranian-backed Bashar Al-Assad regime and the Saudi-backed opposition forces are at odds. In Iraq, Tehran seeks to consolidate its influence over Baghdad whereas Riyadh seeks to gain influence. In Lebanon, Riyadh seeks to gain greater influence where Tehran traditionally has greater influence.

Riyadh and Tehran have conflicting geopolitical interests as both states are attempting to expand their spheres of influence to further advance their respective foreign-policy goals.

However, Afghanistan is a rare instance of converging policies for both of these archrivals. In Afghanistan, both Riyadh and Tehran support the same group, the Taliban.

Fareed Zakaria, a renowned journalist, noted that the Saudis have “created a monster in the world of Islam.” In Afghanistan, that monster is the Taliban.

In the 1980s, as the Soviet Union flattened villages in Afghanistan, millions of Afghans fled to refugee camps in Pakistan. In these refugee camps, Riyadh sponsored madrassas sympathetic to the values of Deobandism and Wahhabism, sects of Islam highly aligned with the ideologies of the political elite establishments in Riyadh and Islamabad.

As the Soviet presence in Afghanistan dwindled, the students in these madrassas became a political and military force, the Taliban. By 1998, the Taliban made significant inroads into Afghanistan with the aid of Saudi Arabia and Pakistan.

In fact, the inception of the Taliban movement was engineered by Riyadh and Islamabad. The Taliban movement was covertly financed by Saudi Arabia as the Taliban fighters were trained by Pakistan’s intelligence agency, Inter-Intelligence Service (ISI). To illustrate: Ahmed Rashid, an expert on Afghanistan, noted in his book, Taliban: Militant Islam, Oil, Fundamentalism in Central Asia, that in preparation for the offensive to capture Herat, a strategic province in Afghanistan, “The Taliban had spent the summer rebuilding their forces with arms, ammunition, and vehicles provided by Pakistan and Saudi Arabia and a new command structure was created with the help of ISI advisers.”

However, 9/11 shifted the political landscape in Afghanistan. In 2001, the Taliban’s regime was toppled. Not only was the Taliban weak military but also politically. As members of the Taliban retreated to Pakistan to rebuilt their movement, in order to survive as a militant group, the Taliban became more accommodating of regional powers’ interests, including Tehran.

Riyadh’s support for the Taliban is rooted in its special relationship with Pakistan. Pakistan is a key ally and strategic partner of Riyadh in the region. Ghazanfar Ali Khan, a writer for Arab News, defines the relationship between Riyadh and Islamabad as “a vast and dynamic web of cooperative linkages, age-old bonds of friendship and undertakings, dating from well before the establishment of diplomatic relations and growing continuously year-on-year.” Similarly, Bruce Riedel, an expert on South Asia, notes that “The Saudi kingdom has a longstanding and intimate relationship with Pakistan . . . They have had a deep strategic military relationship for decades.” Both Riyadh and Islamabad are key actors in advancing each others’ core foreign policy goals. To demonstrate: In February, Pakistan committed nearly one thousand troops to Saudi Arabia as Riyadh blocked Washington's efforts to list Pakistan on an international terror-financing watch list.

After 9/11, Pakistan’s policy didn’t change. Islamabad still utilizes the Taliban as a strategic asset to further its interests in Afghanistan. According to Peter Tomsen, former American Special Envoy to Afghanistan, Pakistan’s current “strategy exactly mirrored the ISI strategy from 1994 to 1998, when the ISI organized, armed, and sent thousands of Taliban, Pakistani, and other extremists into Afghanistan to overthrow the Mujahidin government in Kabul.”

The New York Times notes that as a “longtime ally of Pakistan, Saudi Arabia has backed Islamabad’s promotion of the Taliban.” That continues to be the case today especially, as Saudi Arabia seeks to strengthen its partnership with Islamabad to increase its militaristic capabilities and to strengthen the Islamic Counter-Terrorism Coalition. Riyadh seeks Islamabad’s support in the Islamic Counter-Terrorism Coalition while Islamabad seeks Riyadh’s support in advancing its strategic foreign policy goals in the region via the Taliban.

The Saudi’s support for the Taliban remains an open secret. Saudi officials turn a blind eye when the Taliban are collecting funds under their watch. In 2009, American officials complained that the Taliban were raising millions of dollars during Hajj to support its group’s militant activities. Like Pakistan, Saudi Arabia’s policy on Afghanistan is dual-track. Officially, both governments support the Afghan government while covertly and privately channeling funds to the Taliban.

Moreover, last year, Mishari al-Harbi, a senior Saudi diplomat stated that “Qatar has harbored leaders of a number of terrorist groups and it is backing terrorist groups in Afghanistan.” Riyadh’s condemnation of Doha’s support for the Taliban doesn’t signal a change in Riyadh’s policy of supporting the Taliban. Rather, it is a convenient strategy to undermine Doha’s credibility as a responsible state. Riyadh’s tough stance on Qatar is due to its competition with Doha as both states seek to exert greater influence in the Middle East and North Africa.

To depict an even more complicated picture, last May, Mike Pompeo, Secretary of State, said that, “Iran, too, must end support for the Taliban and other terrorists in Afghanistan.”

Iran fuels instability in Afghanistan when its relationship with Washington deteriorates. Tehran uses Afghanistan as a leverage to exert pressure on the United States. Specifically, Iran does this by arming and training the Taliban to carry out attacks, raising the costs of war for Washington. Nearly a week after President Trump announced his decision to withdraw from the Iran nuclear deal, the Taliban with the help of Tehran led a major offensive, attacking the Afghan city of Farah. As Tehran calculated, the Taliban was pushed back from Farah only when American special forces entered the combat zone.

Furthermore, Iran’s support for the Taliban is tied to Iran’s water security. Afghanistan desires to manage the flow of its water via dams. However, the presence of dams in Afghanistan pose a threat to Iran’s national interest. Last year, Hassan Rouhani, Iran’s President, threatened to retaliate as he said “We cannot remain indifferent to the issue [water dams] which is apparently damaging our environment.” The eastern provinces of Iran, neighboring Afghanistan, have been inflicted with severe drought in the recent years. Therefore, Iran is keen on maximizing the flow of water from Afghanistan to the eastern provinces of Iran.

Ali Ahmad, an Afghan police officer guarding the construction of a dam in the Nimruz province of Afghanistan, told the Guardian that, “When work on the dam begins, of course security will worsen.” This is so because Tehran seeks to delay the development of these dams to maximize the flow of water to Iran. In an effort to halt the construction of the dams, Iran trains, funds and arms the Taliban. In return, the Taliban attack the construction sites of the dams located in the Afghan provinces neighboring Iran.

Regional economic projects like the Chabahar Port do not shift Tehran’s policy of supporting the Taliban. Rather, Chabahar Port and its similitude depict Tehran’s dual-track policy of engaging with the Taliban while also maintain official ties with Kabul. Like Riyadh, this dual-track policy enables Tehran to pursue its national interests through covert and official channels.

While both Riyadh and Tehran accuse each other as being a destabilizing actor in the Middle East, in Afghanistan both states are part of the conflict. In fact, both archrivals are on the same side of the conflict, the Taliban.

As the peace talks pick up steam in Afghanistan’s political theatre, addressing Tehran’s and Riyadh’s role in supporting the Taliban is essential to bringing the conflict to an end.

Image: A member of Afghan security forces holds a rifle at the site of an attack near the Afghan parliament in Kabul, Afghanistan June 22, 2015. A Taliban suicide bomber and six gunmen attacked the Afghan parliament on Monday, wounding at least nineteen people and sending a plume of black smoke across Kabul, as a second district in two days fell to the Islamist group in the north. REUTERS/Ahmad Masood