Pakistan Slowly Is Running Out of Water. Here Is How To Solve The Problem. 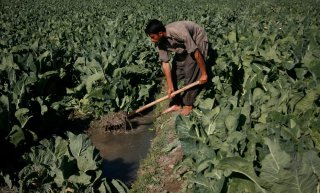 Freshwater is a finite and scarce resource on earth. According to the United Nations, it is feared that as many as 1.8 billion people, especially those living in Asia, will face acute water scarcity by 2025. The increase in per capita demand for water due to rising population, ongoing climate change, and water-pollution are aggravating the situation further by reducing the per capita availability of freshwater. This situation is more worrisome in South Asia. For instance, Pakistan—an agrarian country in South Asia—is facing acute water scarcity threats. The International Monetary Fund (IMF) has also placed Pakistan at “third” in the list of countries facing acute water scarcity. To mitigate this threat, Pakistan should adopt “drip and sprinkler” irrigation technique to meet its agricultural needs.

Nonetheless, Pakistan’s irrigation schemes are retaining nearly the same level of inefficiency. For instance, out of the 101 million acre-feet (MAF) of Indus River water that is diverted from the Indus basin towards irrigating crops, only 56 MAF actually reaches the crops, while the remaining 45 MAF is wasted as conveyance losses. Thus, Pakistan’s water wastage ratio is an alarmingly high 45 percent; Such a huge amount of freshwater could be beneficially utilized for agriculture or any other sector, but the benefits remain untapped due to a poor water management scheme. To fill the gap caused by the conveyance losses, the groundwater is extracted by using tube-wells, which contributes around 50.4 MAF. However, an additional 26.3 MAF of water gets wasted as “Field Application Losses” during the conveyance of groundwater. Furthermore, the large (50.4 MAF) sums of groundwater extraction are causing the groundwater table to decline in several regions. The impact is felt more in major cities; for instance, in Lahore, the groundwater table is at 130 feet, which is feared to fall below 230 feet by 2025.

A pertinent technique that can minimize these conveyance losses and can reduce Pakistan’s dependence on groundwater for irrigation is the “drip and sprinkler” technique, which was recently tested by the Punjab Agriculture Department in Rawalpindi in 2018-19. In that experimental implementation, the drip system was tested on around 4,443 acres of land, while the sprinkler system was used for irrigating 1,090 acres of land in the region. The results have proven the technique as 90-95 percent more efficient and affordable in Pakistan. In particular, it resulted in saving 60-70 percent more water during the irrigating of crop-plants.

Considering the efficiency in saving substantial portions of irrigation water, it is suggested that the drip and sprinkler irrigation scheme should be spread to all major agricultural regions in Pakistan. In particular, Punjab province uses a larger amount of Indus water for irrigation in comparison to other provinces and also receives a 51% share of federal resources as per the National Finance Commission (NFC) Award. Saving the Indus basin’s water via the installation of the “drip and sprinkler” system in Punjab will make available an additional amount of water for Sindh too, because the Indus River flows towards Sindh from Punjab.

The agricultural sector consumes around 95 percent of surface water in the country. Nonetheless, according to the Government of Pakistan’s Finance Division, the agricultural sector also contributes around 18.9 percent to the national GDP, which is a significant share that cannot be neglected. Thus, freshwater, in relation to irrigation, is an essential contributing factor to national economic security, as Pakistan earns revenue by exporting its major crops. Moreover, freshwater also contributes to the nation’s food security through the production of food crops. The adoption of the drip and sprinkler technique in the agricultural sector can reduce Pakistan’s worsening freshwater scarcity problem and, in turn, can also strengthen the country’s economic and food security.

Nasir Javaid is a student of MS Business and Public Policy at Lahore University of Management Sciences (LUMS). He also has a bachelor’s degree in Economics and Political Science from LUMS. His core research areas are related to International Water Law, Water Management in the Indus Basin, Human Security, Information Warfare, and International Humanitarian Law. He tweets @Nasir_Minhas