The Pitfalls of Israeli-Palestinian Confederation 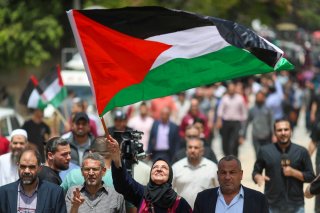 After more than a century of tension and conflict in what was once the British Mandate of Palestine, the idea of an Israeli-Palestinian confederation has been put forward more than once. Two notable recent proposals are A Land for All and the Holy Land Confederation (HLC), both developed by joint teams of Israelis and Palestinians. Outlines of the like—as any reasonable suggestion to improve the status quo on the ground—are welcome. Indeed, by now many regard the “classical” two-state solution as on life support, while a one-state solution may seem to set the Middle East up for more trouble.

Creative and out-of-the-box thinking is certainly necessary and some points in the confederate models are absolutely valid, both in their rationale and in their concrete propositions. Nevertheless, they are not without pitfalls or even built-in spoilers. Some of these are inherent to confederations in general, but an important number of them tie in with the intricacies of the Israeli-Palestinian situation.

One main issue is that no one-fits-all definition of confederation exists. In contemporary political discourse, the term refers to an agreement between sovereign states to “pool” their decisionmaking in a limited number of areas, often foreign affairs and defense (note that Canada and Switzerland, which have been called confederations historically, function as federal states today). In that vein, the main characteristic of both proposals for an Israeli-Palestinian confederation is that they envision the creation of two states without operating a complete separation between them. Both Israeli-Palestinian proposals also indicate that they are open for discussion and negotiation, so they include a certain margin of maneuver to decide on exact arrangements between the two states.

The critical point in the situation at hand is that confederate structures are usually set up to strengthen the confederate entities’ position towards external threats (a historical overview is given at the end of the HLC proposal). In the Israeli-Palestinian case, on the other hand, the arrangements laid out seem to compensate for the parties’ failure to agree on important matters as borders and security, minorities and settlements, and Jerusalem. The inability is so pervasive that it exists regardless of the question whether the overall framework would be a two-state solution, a one-state solution, a prolonged status quo, or something else.

As a result, supposedly well-meant arrangements to reconcile opposing views risk being exploited by both sides to maximize gains. For instance, agreed numbers of “permanent residents” in the other country could easily come under pressure by natural growth or administrative procedures favoring or restricting residency. Also, “open” or “usually open” borders may be hard to guarantee in light of the real or perceived threats that either side can be expected to bring up, given recent history. As regards security, the HLC seems to take into account current Israel Defense Forces control by recognizing that in a confederate model the latter would “play the lead role” (besides international and Palestinian forces) in responding to external threats. This is likely an insufficient answer for Israelis who fear that a Palestinian army may be turned against them and who at most (if they accept Palestinian statehood at all) would agree to a generalized Palestinian police force, as it currently operates in Area A of the West Bank.

Both models rely, implicitly or explicitly, on the capability of the proposed two states to convince their citizens who are permanent residents in the other state that the latter will be willing and able to secure their basic safety needs. Given ongoing events and generally high levels of suspicion and mistrust between the parties, to which the HLC proposal also alludes, this only seems a remote possibility today.

Having said that, both confederate models attach a great deal of importance to the development and implementation of reconciliation mechanisms, which may help both Israelis and Palestinians become acquainted with—and gain insight into—the perspectives and narratives they are most likely unfamiliar with. Such mechanisms would include generalized teaching of the other language (Hebrew or Arabic) as well as the allocating of equal shares to both Jewish and Arab perspectives on history, combined with systematic scanning of schoolbooks for incitement against the other group. It should be noted, however, that many of these suggestions do not necessarily need to be carried out under the umbrella of a confederation: as such, they could be equally beneficial in the context of a two-state solution, a one-state solution, or a continuation of the status quo. A similar reasoning applies in the economic realm, where sustainable ties can be developed through concrete decisions on the ground. Indeed, such ties would be possible in an economic union between two independent states (as in the original 1947 UN Partition Plan), but it is also the case today (at least to some extent and with varying degrees of success) in a situation in which political issues remain unresolved.

There is another reason to be careful not to put the confederation cart before an Israeli-Palestinian horse. Although both societies have lived in the same, small geographical space for over a century and share certain cultural characteristics, they are also separated by profound differences in their political history and societal trends. Each of them has its own assets and challenges. Therefore, it may be preferable, once violence and the threat of it have fallen significantly, to grant both societies enough time to develop, revise, and consolidate their own internal frameworks, before engaging in too many ventures that could put all internal and confederate structures at risk. In this context, it needs to be recalled that both Israeli and Palestinian society are far from homogeneous. As they constitute fairly young entities in their present form, it is probably wise to first and foremost ensure domestic stability and devise societal frameworks that accommodate the various ethnic backgrounds and religious/secular lifestyles. In particular, Israel has comprised since its creation a sizeable Arab minority, whose position in the country has been the object of much debate yet also the subject of important developments. It would seem fitting that Israeli society and its Arab minority be given the opportunity to improve their lives and tackle challenges in a process of mutual understanding, without too much exposure to possible complications caused by confederate agreements. Again, some of this is implicit in the confederation schemes. For instance, the HLC text, in drawing parallels with the European Union, comments that one of the factors facilitating cooperation between the latter’s member states is the “common nature of the European members’ regimes”.

In sum, confederation may not be a bad idea per se, but it should not be brought in as a ploy to dodge the difficult questions opposing Israelis and Palestinians. Certainly in an initial stage, any proposal entailing more separation between the parties would present at least two advantages. First of all, a neater and clearer delimitation of the powers and responsibilities of both parties would create less loopholes that can be exploited, something which in the longer term could contribute to the building of trust between partners who start to see each other as reliable. Second, although compromises on borders and population centers are amongst the most difficult (as the related claims are often mutually exclusive), any agreement reached on them could somehow bring the parties to see their own narratives in relation to the other’s, as a compromise would mean that both would have made concessions, but also achieved goals. This process would then, in turn, both feed into the reconciliation mechanisms and be sustained by them.

There is no instant solution in the Israeli-Palestinian arena. Any progress towards improving daily lives and fostering a sense of security for all can only be achieved through careful measures that not only yield tangible results on the ground, but also work to lower the current levels of animosity and suspicion. To achieve these goals, different political and legal options remain on the table, yet it is crucial that any solution put in place contribute to mutual confidence and do not undermine it: trust can be built on, but it should never be considered a given.

Dr. Alexander Loengarov is a visiting fellow at the international and European law program at Vrije Universiteit Brussel (Brussels, Belgium) and a former official of the European Economic and Social Committee of the European Union. At Vrije Universiteit Brussel, he coordinated the first rounds of the EU’s Erasmus Mundus External Cooperation Window scheme for academic mobility with Israeli and Palestinian institutions. In addition to his thesis on the entanglement of politics and law in the issue of recognition of Palestinian statehood, he has published analysis for think tanks like the Washington Institute for Near East Policy and Israel Policy Forum, as well as opinion pieces on Middle East and Israeli politics for the Brussels Times.

His writings reflect solely his own views, and not those of the European Economic and Social Committee or the European Union, which cannot be held responsible for any use made of it.