A Plausible Solution to the Syrian Refugee Crisis 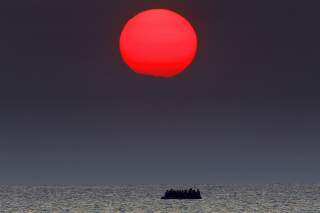 The Syrian crisis is approaching its ninth year. In that span, the conflict has taken the lives of over five hundred thousand people and forced over seven million more to flee the country. Of those displaced, more than 3.6 million have sought refuge in Turkey, which now hosts more refugees than any other country in the world. Their numbers, bolstered by births and new arrivals, continue to increase. The Syrian refugees join close to four hundred thousand more asylum seekers and refugees from other countries.

At a time when traditional durable solutions such as resettlement or a voluntary, sustainable, and dignified return do not look viable, Turkey’s government at the local and national levels, civil society groups, and UN agencies are grappling with how to integrate these newcomers⁠—into society broadly, and into the labor market specifically. As I argue in a new report, published in partnership with the Tent Partnership for Refugees, extending EU trade concessions specifically in the agricultural sector could incentivize Turkey to better integrate Syrian refugees into its labor market.

Enhancing the self-reliance of Syrian refugees in Turkey and increasing their access to livelihood opportunities remains a substantial challenge. Although the Turkish government adopted legislation in 2016 to facilitate access to work permits, thus far less than 2 percent of the 2.2 million Syrian refugees of working age (fifteen- to sixty-four-years old) are formally employed. More than one-third of the Turkish economy is estimated to be based on informal employment, and the entry of approximately a million Syrian refugees has depressed employment levels and wages, among especially unskilled host community residents. This exacerbates social tensions and has even led to violence, adding urgency to the task of finding a remedy.

A novel solution would be for the EU to offer Turkey trade concessions tied to the formal employment of Syrians. This would be in line with an increasingly popular policy argument that, in the spirit of burden-sharing and pre-empting secondary movements, countries hosting a large number of refugees should be granted better access for their exports.

Originating in the aftermath of the European migration crisis, this idea has received backing in various high-level conferences such as the February 2016 London Conference and the UN Summit on Refugees and Migrants in September 2016 and was endorsed in the UN Global Compact on Refugees adopted in December 2018). More recently, the OECD’s Development Assistance Committee adopted the “Common Position on supporting comprehensive responses in refugee situations,” which includes the extension of “trade facilities” to benefit refugees as well as the host country’s economic development.

This approach to refugee self-reliance, focused on trade concessions and economic growth, aims to build on the limited success of the livelihood programs of consecutive UN regional refugee and resilience plans that focus primarily on improving the employability of the refugees. It is an approach that combines a supply-side focus with policies that can help expand demand for formal refugee labor.

Currently, the 2016 EU-Jordan Compact is the only functioning example of a deal matching trade concessions with refugee labor. In this innovative deal, the EU agreed to allow greater access to its internal market for Jordanian companies employing refugees. It is with this logic in mind that the EU and Turkey should start formulating a strategy aimed at enabling Turkey to expand its agricultural exports to the EU in return for drawing Syrian refugees into the formal economy.

While the existing customs union between the EU and Turkey covers only industrial goods, allowing these products to enter the European internal market freely and without tariffs, the Turkish agricultural sector stands to benefit from increased trade with the EU and the economic growth that would follow. Fresh agricultural products are currently excluded from the customs union and face quotas, duties, and regulatory restrictions, while the agricultural portion of industrially processed agricultural products is taxed. These EU concessions would be tied to the formal employment of Syrian refugees in a manner that meets the labor standards of the International Labour Organization and EU. A certification and monitoring mechanism would be necessary to ensure compliance with the implementation terms that would be agreed upon in such an EU-Turkey Compact.

An agricultural focus is also suitable because large numbers of Syrian refugees are already employed in this sector, particularly in the largely agriculture-based economies of the Turkish provinces near the Syrian border. At present, their employment is marked by informality and deep precarity. Such a compact would help draw the refugees into the formal economy. It would also create opportunities to better use the agricultural experience and skills of refugees who have fled the northern rural parts of Syria at a time when the Turkish agricultural sector suffers from labor shortages and structural challenges like an aging workforce.

Ultimately, cooperation between the EU and Turkey to improve refugee self-reliance by providing them access to decent work is in the interest of both sides. The underperforming Turkish agricultural sector, facing both domestic structural problems and external trade barriers, offers a unique opportunity to spark change in the near term. For Turkey, the implementation of such a plan would help refugees stand on their own feet, become productive members of Turkish society, diffuse public resentment, and reduce the likelihood of crime, while at the same time fostering economic growth. For the EU, this plan would reduce both the likelihood of secondary movements of refugees and the need to raise funds for humanitarian assistance as refugees become more independent in the future.

Such a “win-win-win” approach benefiting the EU, Turkey, and most importantly the refugees, could constitute the basis for expanding and strengthening the functional cooperation between the EU and Turkey that has emerged since the European migration crisis and the adoption of the Facility for Refugees in Turkey at a time when the political relationship is fraught. Such a compact would also constitute a concrete manifestation of the kind of burden-sharing that the Global Compact on Refugees advocated for countries hosting a large number of refugees and set an example.