Political Pressure on Iraq Will Backfire on America 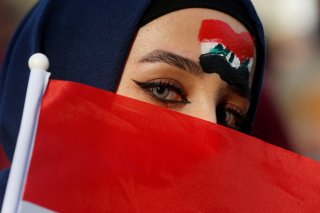 The opening of a U.S.-Iraq strategic dialogue, the first in over a decade, provides an opportunity to re-evaluate America’s options in Iraq by considering what the U.S. presence in that theater could realistically achieve if it remains as well as the possible results of a complete withdrawal if it does not. President Donald Trump described the war in Iraq as “a horrible mistake” and declared the “Endless Wars Must End!” on Twitter. But like his predecessor, he is finding the more isolationist approach plays well with the American public though in practice it is extremely difficult to implement. Withdrawing from the “Middle East Quicksand” and reducing the U.S. military footprint in the region is proving more complicated than Trump might have anticipated because of opposition to such steps on the professional levels of U.S. government, and it conflicts with some of the president’s other stated goals including preventing the re-emergence of the Islamic State and maintaining “maximum pressure” on Iran.

The impetus for ending the U.S. presence in Iraq (and drawing down from the Middle East more broadly) is the astronomical price of U.S. wars there in terms of blood and treasure, as tweeted by Trump “8 Trillion Dollars and many thousands of lives (and millions of lives when you count the other side)” from which the U.S. derived minimal returns.  It is undeniable that the costly U.S. invasion of Iraq not only drained resources but also unleashed Iran in a way that provided Tehran with the opportunity to both expand its influence and bog down Washington in a messy counter-insurgency campaign. But to order the United States to withdraw based on those reasons would be to argue against maintaining the U.S. presence in Iraq one decade ago—not today. Frustration with the results of the U.S. occupation of Iraq under Presidents George W. Bush and Barack Obama is an inadequate reason to ignore the fact that maintaining a presence there now is considerably less costly than during the 2003–2011 era. The number of Americans killed in Iraq last year (8) was less than 1 percent of the number of troops killed in 2004-2007 (800+), while U.S. expenditures to maintain its current presence in Iraq is similarly only a small fraction of the annual expenses incurred during the aughts.  The key question, then, is what does the United States stand to gain from maintaining it?

If the White House’s aim is to force Iraq to choose between Washington and Teheran, then it will likely be disappointed by the results of such a maneuver. Baghdad is presumably aware of America’s declining interest in the Middle East and the fickle nature of U.S. foreign policy as of late which has led each successive U.S. president to undo many of the actions of his predecessor. Iran, on the other hand, has an enduring interest in Iraq due to the countries’ geographical proximity to one another as well as religious affinities. Iran has also enmeshed itself into the political, security, and economic fabric of Iraq to the extent that attempting to remove it could prove highly destabilizing for Iraq; because Iraq constitutes Iran’s strategic depth, as both a bridge and a buffer, Tehran would not forfeit its deeply entrenched positioning there without a fight.

The United States should not understand this to mean that Iraq has been lost outright to Iran, rather that it is an area of competition for influence and it will remain so, for better and for worse, as long as the United States does not withdraw.  By remaining engaged with Iraq, the United States provides politicians in Baghdad the opportunity to counter-balance Iran’s penetration and to avoid becoming entirely beholden to Tehran.

Washington should leverage its value as a partner to ensure several clearly defined aims. Decisionmakers in Baghdad are likely aware that if the U.S. derives no benefit from its continued presence then it may be inclined to drawdown, which would create a security vacuum that Iran would rush in to exploit in order to: 1) use Iraq as a production, storage, and launch site for (plausibly deniable) precision missile strikes against U.S. forces and allies in the region including Israel and Saudi Arabia, 2) influence Iraq’s oil policy to exert greater control over the global energy market, 3) use Iraq as a venue for sanctions-busting, which will ultimately leave the Iraqi economically deeply isolated.

Assuming Iraqi leaders are willing to cooperate with Washington in order to avert Iranian designs for Iraq, the United States should seek to rein in Iran’s most dangerous behavior there with the understanding that there are limitations on what it can demand vis-à-vis the Iraqi government. Ensuring the safety of U.S. forces and diplomatic personnel stationed in Iraq should be the first priority.  A second goal, with significant overlap to the first, would be cracking down on activities related to Iran’s precision-guided munitions program taking place on Iraqi territory. Third, the United States might seek to promote greater Iraqi integration into the global economy in order to reduce its dependence on Iran. Fourth, Baghdad and Washington ought to discuss how to prevent Iraq from becoming a battlefield on which the U.S.-Iran tensions play out.

In January 2020, we assessed in these pages that the assassination of Iran’s Qassim Suleimani was not a “gamechanger” which would dramatically alter the strategic environment in the Middle East—and that thesis still holds. However, the Quds Force commander’s demise may provide latitude for somewhat closer U.S.-Iraqi cooperation because it appears unlikely that Soleimani’s replacement will develop a comparable level of familiarity with and control over the Iraqi political and security arena. That window of opportunity has since been compounded by the appointment of Mustafa al-Kadhimi, who is viewed as close to the United States, to the post of the prime minister of Iraq.

American frustration with the situation in Iraq is understandable—but it will endure until the United States either sets more clearly defined and limited goals there or withdraws. While the latter option may be more politically expedient, the “all or nothing approach” will have significant costs for U.S. interests, regional allies, and the people of Iraq. After all, it is not only initiating wars that can have unintended consequences, that also applies to how one chooses to manage or end them.

Eldad Shavit is a senior researcher at the Institute for National Security Studies (INSS) in Israel and previously served in senior roles in Israeli Defense Intelligence and the Prime Minister’s Office.

Ari Heistein is a research fellow and chief of staff to the director at INSS.