Protests Show That Iran Is Having Trouble Controlling the Middle East 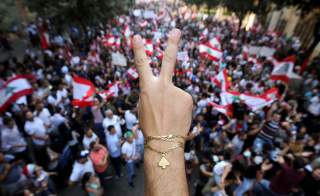 All is not well with the Mullah-dominated regime in Iran. Economic distress and political repression are rampant in the country. When these are coupled with the increasingly angry reactions in Lebanon and Iraq against Tehran’s overbearing attitude toward its neighbors there are clear indications that the regime is in dire trouble both at home and abroad. This does not necessarily mean that the Islamic Republic is on the verge of collapse. It does mean that the regime’s legitimacy is under challenge to a degree that even exceeds the disaffection with the system that was demonstrated in 2009 when the movement against Ahmadinejad’s reelection engineered by the regime spawned what came to be known as the “Green Movement.”

The Green Movement was suppressed with a heavy hand but only after its proponents had been allowed to vent their anger publicly for a few weeks. This time around the regime’s security apparatus has come down heavily on the protestors from the protests’ very inception. Moreover, the protestors have received warnings not only from the hardline clergy but also from the moderate President Hassan Rouhani that they must not upset the applecart by playing into the hands of “hostile powers.”  In 2009, there was a clear division between the moderates and the hardliners within the regime, with the former supporting the Green Movement and the latter opposing it. The two leading figures of that movement were Mir Hossein Mousavi and Mehdi Karoubi, both contenders for the presidency and part and parcel of the ruling dispensation, albeit of its moderate winning.

This time the anti-regime protests have erupted spontaneously and have not been encouraged, let alone led, by any person or group with links to the regime. As in Hong Kong, Lebanon, and Iraq, the movement itself is throwing up its leaders. This can be both the strength and weakness of the movement. On the one hand, it is very difficult for the government to identify the leaders and neutralize them. On the other, the spontaneity of the protests demonstrates a lack of organization and, therefore, sheds doubt on the movement’s capacity to sustain the protests for any length of time.

Another major difference between 2009 and 2019 is that in the former case the protests were triggered by a political act, namely, the regime’s decision to rig the presidential election in favor of its preferred candidate. The protestors’ main grouse was that the election had been stolen and their votes rendered useless. In 2019, the protests have been triggered primarily by economic distress with matters coming to a head following the government’s decision to increase the price of gasoline by 50 percent.

Economic distress had been building up since the re-imposition of sanctions by the Trump administration following its withdrawal from the Joint Comprehensive Plan of Action in May 2018 and its decision to apply “maximum pressure” on Iran to make Tehran change course on nuclear and related issues as well as curb its meddling in regional affairs. The reinstatement of U.S. sanctions has driven Iran’s economy into recession with major companies exiting Iran and its oil exports, the lifeline of the economy, plummeting dramatically. The latter has been particularly the case after the Trump administration ended sanctions exceptions for the eight largest buyers of Iranian oil, including China, India, and Turkey. Oil export figures speak for themselves: Iran’s oil exports decreased form 2.45mbd (millions of barrels per day) in May 2018, when the sanctions were re-imposed, to 0.26mbd in October 2019—sending the Iranian economy into a tailspin. As a consequence, the value of Iran’s currency has declined sharply with the unofficial rate plummeting to 135,000 to $1, thus adding to the financial woes of the Iranian public.

The fact that no regime factions are involved in the current protests against Supreme Leader Ali Khamenei, as well as the Rouhani government, explains in great part the quick and harsh regime response that has led to dozens of deaths and the incarceration of hundreds if not thousands of protestors in various parts of the country. It is above all a sign of significant nervousness on the part of the regime regarding the loss of its legitimacy. But, it is also linked to the backlash against Tehran in neighboring countries, especially Lebanon and Iraq, where it has been a major external player.

This backlash is the direct result of the overweening attitude of the Iranian regime that has blatantly attempted to dominate the political landscape of both countries. It has endeavored to do so through Hezbollah in Lebanon, which is heavily financially and militarily dependent on Iran. Hezbollah has now become the dominant political force in Lebanon given its strong discipline, the charismatic personality of its leader Hassan Nasrullah, and its ability to manipulate Lebanese political factions. The Christian president of Lebanon, Michel Aoun, is an ally of Hezbollah and owes his position to Hezbollah’s backing. The Sunni prime minister, Saad Hariri, dependent upon Hezbollah's support, has been forced to resign; the demand for President Aoun’s resignation is gathering momentum. If Hezbollah loses credibility among its Shia constituents, as it seems to be doing, Iran will lose much of its influence in Lebanon, which it considers essential both for confronting Israel and for providing support to the Assad regime in Syria.

Since the time of the bloody Iran-Iraq war of 1980-88, Iran has considered Iraq to be of vital significance to its security. It sees a pliable regime in Baghdad as essential to prevent a repetition of the eight-year war that left a million Iranians dead. Tehran has used the Popular Mobilization Forces (PMF), an umbrella organization dominated by Shia militias that was initially set up to fight ISIS, as well as various Shia political leaders and parties, which have long-standing connections with Iran going back to the days of Saddam’s rule, to dominate the course of Iraqi politics. A succession of prime ministers, including the current incumbent Adil Abdul Mahdi, owe their position to Iranian support.

This flagrant strategy of controlling the course of Iraqi politics plus the economic dependence of Iraq, especially of the Shia south, on Iran in the arenas of trade, religious pilgrimage, and development projects, has created enormous resentment in Iraq that seems to have finally boiled over. Cross-sectarian protestors, Shia and Sunni, have chanted slogans against Iran and called for Iraqi independence from Iranian influence. Some of the largest and most virulent demonstrations against the Shia-dominated Iraqi government and against Iran have taken place in the predominantly Shia cities and towns in southern Iraq, signaling a significant reversal in Iran’s sectarian fortunes. Shia protestors attacked the Iranian consulate in the holy city of Karbala and tore down the Iranian flag before being repulsed with the use of force that left several dead.

Such demonstrations have prompted Iran’s Supreme Leader Khamenei to blame “foreign elements” for inciting the protest movement. Tehran has several instruments it can use to prevent radical change in Iraq, including the Shia militias trained by the Islamic Revolutionary Guard Corps. However, the deployment of these militias to crush the protest movement has added to Iran’s unpopularity in Iraq. It has led to confrontations between the PMF and the emerging popular forces with several of the latter killed by PMF snipers. These high-handed methods have further discredited Iran in the eyes of the Iraqi population, including the Shia.

The intensifying anti-Iranian mood in Lebanon and Iraq, both strategically important for Tehran, signals that it is no longer as easy for Iran as was once believed to be the case to expand or even preserve its political and military influence in the Middle East. Its ambivalent relations with Russia and Turkey as well as Israel’s continued targeting of military installations belonging to forces allied with Iran also present Tehran with difficult choices in Syria. This combination of escalating internal dissent with an increasingly unfavorable regional environment is presenting challenges to Iran’s state interests and, more particularly, to the legitimacy of the mullah-dominated regime that Tehran has not witnessed in a long time. These trends, if they continue, could signal a major change in the balance of forces in the Middle East to the detriment of Iran’s standing in the region.