The Reason Why Iran Won't Become an Energy Superpower 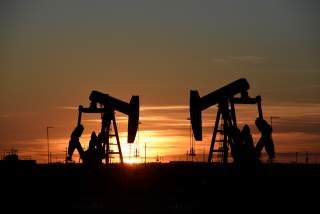 In recent years, the Turkmen government has refused to toe the line of the United States and Europe, continuing gas sales to Iran, despite misunderstandings over costs affecting the economic relations of both countries. These issues must be ironed out once and for all if any increase in ties is to be realized at a time when Iran desperately needs allies in the region.

According to 2017 figures, the volume of trade between Iran and Turkmenistan has already grown to a value of $1.7 billion. Mahmoud Vazei, the Iranian president’s chief of staff, has set out the goal of pushing this to an overall value of $60 billion. The roadmap to achieve this goal requires boosting ties across every industry, improving trade, transport and engineering service links. Oil products, petrochemicals, electricity, textile products and light industry are the most important export items Turkmenistan is equipped to provide to Iran. Thus, Turkmenistan is Iran’s strongest partner in Central Asia and the Caucasus, despite a decline in trade over recent years.

The cooperation between the two countries involves gas swaps, the development of banking cooperation and technical and engineering services, with further progress expected on the Sarkhas Bridge, which will allow for road and rail links to become operational within a short time.

According to an agreement signed in 1997, Turkmenistan exports gas to Iran, but almost every year during the winter months, short-term price hikes are experienced. In 2006, the country stopped exporting gas to Iran and demanded an increase of nine times the price, which Iran accepted for a brief time. The same action was taken by Turkmenistan in the winter of 2016, but this time Iran refused to comply.

Referring to Iran's plan to sue Turkmenistan's Turkmen Gas company for the quality of the gas supplied, the Iranian Minister of Oil stated, “We have another complaint the International Arbitration Court in order to reconsider the price of its export gas, because we believe the prices are too high and should be reduced.”

The gas dispute between Iran and Turkmenistan, which has only been inflamed since the beginning of 2017 when the country once more cut off gas exports to Iran, has come to no compromise despite periodic negotiations. It is most likely that the dispute will be referred to the International Arbitration Tribunal. The threat of cutting gas exports to Iran is a tool that Turkmenistan has used many times over the past few years. Indeed, in recent years, given the need of the northern and northeastern regions of Iran to pump extra gas from Turkmenistan, Tehran often folded to demands. However, due to the increase in gas production in South Pars and entering of the eleventh stage of the gas transmission network, the latest threats and ultimate cuts were far less effective. Therefore, after Turkmen gas was cut off in January 2017, Iran announced that ultimately it would be Turkmenistan who missed out from the action.

While Turkmenistan has demanded between $1.5 billion to $1.8 billion from Iran for gas exports in 2006–2007, Iran has not accepted the figure on principle, and calls for referral to international arbitration. In January of 2007, when the cold of the winter peaked and more than twenty provinces of the country suffered freezing temperatures, Turkmenistan took advantage of the situation and announced that it would raise its export gas prices to Iran by nine times the price. Forty dollars per thousand cubic meters was thus risen to 360 dollars, and the extent of this hike marks the crux of Iranian policymakers’ anger.

Furthermore, with sanctions making it difficult to carry out the banking transactions required to make payments, the ability of Iran to make such payments has fallen into question, which may lead to the subject being shelved for the time being.

Since the beginning of 2018, Turkmenistan has continued to withhold gas exports to Iran due to what it calls the “nine-year delay in Tehran's $ 1.8 billion debt settlement.” Despite this export restriction, a gas swap has continued. Since October last year, Iran has received Turkmen gas under the so-called Swap Agreement, delivering the same amount of gas to the Republic of Azerbaijan.

One month after the cutting of Turkmen gas supplies to Iran, officials of the Islamic Republic claimed Turkmen gas was still being swapped regardless. The Ministry of Oil has expressed to Turkmenistan its willingness to engage in a long-term cooperation in the energy sector as well as joint exports to India, Pakistan and the Gulf states.

New talks regarding a potential gas swap between Turkmenistan and two Indian companies, Gil and Indian Ocean, were discussed in Tehran. The talks resulted in a contract agreement to supply India with gas through a maritime pipeline. Turkmenistan, on the other hand, wants to export gas to India in a more affordable and secure manner, which can only be achieved through joint bilateral negotiations between Turkmenistan, Iran, and India. Turkmenistan has welcomed plans to launch the construction of a pipeline and called for its gas to once more funnel through Iranian pipes.

The increase of production in joint fields is a priority for Iran, which is missing out due to vastly better investments in fields along its borders with Iraq and Gulf states. Investments in fields shared with Turkmenistan have a strong chance of yielding fruitful results. The priority is to exploit common gas fields in the north and northeast part of the country where it can be immediately consumed at minimal transit costs. According to Bijan Zanganeh, “The joint fields of Iran and Turkmenistan are Iran’s priority, this is now an Iranian exploration project, and Iran hopes that the results of these studies will be sent to the Central Oil Company.” The policies of the Ministry of Oil include joint projects in the fields of oil, gas and petrochemicals with neighboring countries. Therefore, Iran is ready to carry out design, construction of oil and gas transmission lines, pressure-boosting stations, refining and separating liquids from gas and converting them to other petrochemical products, and to negotiate with Turkmenistan in the same way.

With new sanctions back in place, Iran now has no opportunity to increase its swap capacity with Turkmenistan. Additionally, it cannot expect to have great amounts of investment opportunities to explore. India was interested in importing Turkmen gas via Iran’s infrastructure, but now it seems intent to wait until Iran’s problems with the United States are resolved. Iran can, on the one hand, rely on its political, cultural, and economic capacities to provide a stronger basis for its economic relations with its neighbors. But that means Iran has to know when to pay attention. Turkmenistan’s foreign-policy priority focuses on cooperation with its neighbors, including Iran, which Turkmenistan’s president has signaled on various occasions. On the other hand, Iran must seek solutions for more reliable contracts than those based on oil or limited gas transfers to Turkmenistan. Long-term contracts with a clear and workable system of pricing would go a good way towards achieving this.

Under normal circumstances, Iran’s energy infrastructure could transfer oil and gas from the Caspian Sea to consumer markets across the globe. As it is, the country is struggling under sanctions. It now relies on production from the South Pars and other gas fields which, despite being sufficient to fuel current domestic demands, may fall behind and once again make imports from Turkmenistan necessary. Iran has a high domestic natural gas consumption and needs more foreign technology and financial capital. Easing tensions with the international community is the best—and perhaps the only—tool for Iran to achieve its own interests. In sum, despite existing cooperation, there are still many areas in the energy sector that can be used to promote bilateral relations in the interests of both neighbors, but the expansion of cooperation depends on solving the challenges and making the most of the opportunities that come.