Red Line Rumble: Iran Tested the Boundaries of the Trump Administration and Got Burned 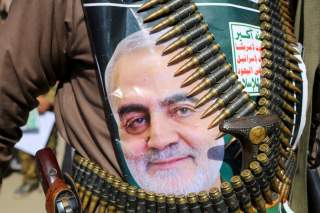 Iran’s Maj. Gen. Qassim Suleimani was often depicted as one of the most powerful figures in Iran. So, when the Trump administration decided to assassinate him via drone strike on January 3, the act was characterized by some as a “defining moment in the Middle East.” But the strategic reality—in which national interests and bureaucratic machinery are more powerful than any one individual—tells a starkly different story.  Although the strike on Suleimani may have demonstrated greater willingness by the Trump administration to use military force than was previously anticipated, the three key challenges posed by Iran remain unresolved.

The first challenge from Tehran is its calibrated conventional escalation to counter Washington’s “maximum pressure” campaign. The regime conducts this effort in a manner that aims to avoid war with the United States but inflicts enough damage to buoy its economy in two possible ways: 1) raise oil prices, to compensate for the reduced quantity of Iranian energy exports, by fomenting geopolitical uncertainty and targeting international supply, 2) stir up a crisis that could be resolved through mutual concessions including compensation from Europe or the loosening of sanctions. By exacting a price for the “maximum pressure” campaign, Iran also aims to deter further steps against it until 2021, which is when America could have a new president.

Second, after its recent declaration that it no longer recognized the JCPOA’s restrictions on its nuclear activities, Iran continues to creep toward the nuclear threshold. These gradual steps serve to increase pressure on the parties to the agreement to “save the agreement” by financially compensating Iran for the U.S. withdrawal and reimposition of sanctions—though that has yet to bear economic fruit for Iran. In parallel, by increasing enrichment and conducting research prohibited by the deal, Iran is closing the distance between itself and a nuclear weapon which increases the viability of a number of conceivable and dangerous scenarios, including a “breakout” or a “sneak out” to a nuclear weapon.

Third, and not directly related to the U.S. withdrawal from the nuclear deal, the Islamic Revolutionary Guards Corps Quds Force has undertaken a long-term project to augment the extraterritorial firepower of Iran and Iranian-backed groups around the region. From Iraqi Popular Mobilization Units to Lebanese Hezbollah and Yemen’s Houthis, Iran has cultivated partnerships with the enemies of its enemies and sought to supply them with increasingly powerful and precise weapons. This was intended primarily to hold U.S. forces in the region and U.S. allies, including Saudi Arabia, the UAE, and Israel, hostage with the threat of precision missile barrages against sensitive targets.

Washington’s Iran policy launched in May 2018—continuously increasing economic pressure on Tehran—worked in the tactical sense that Iran’s economy contracted dramatically. However, it has not achieved the larger strategic goals vis-à-vis Iran of halting provocations, blocking nuclear advances, and foiling force buildup in the region– neither through direct action nor by bringing Iran back to the negotiating table. Until the final week of December, when a U.S. contractor was killed by Iran-backed Iraqi militia Kataeb Hezbollah (KH), the United States directly confronted those three challenges to a minimal degree, if at all.

The Trump administration’s long-standing red line over the killing of U.S. personnel was bound to be tested. For every occasion that it suffered no kinetic response, Iran grew increasingly brazen. First, it blew holes in empty oil tankers in the Straits of Hormuz with limpet mines, then it targeted loaded tankers. Next, it targeted an unmanned U.S. asset valued at around $200 million over international waters. When Trump called off the retaliatory strike, Iran saw a green light to strike at the heart of a U.S. ally’s economy—critical Saudi Aramco facilities—to which the U.S. response was minimal and non-kinetic. Unsurprisingly, the Iranian assessment, and the assessment of most experts around the world, was that Trump was so averse to being dragged into another Middle Eastern war that he would avoid responding to provocations for as long as is it was feasible to do so.

The U.S. reaction when that red line was crossed, strikes on five KH positions throughout Syria and Iraq and killing twenty-five of the group’s members, was beyond what Iran or its clients expected. In response, they organized violent protests and stormed the U.S. embassy,  touching on a raw nerve for Americans who remember the 1979 hostage crisis in Tehran and the 2012 attack on a diplomatic installation in Benghazi. Perhaps this struck a deeper chord for President Donald Trump, who saw how Secretary of State Hillary Clinton’s political career was haunted by allegations of negligence in Benghazi. The response was directed at the patron rather than the proxy this time—and Suleimani was killed in a drone strike shortly after landing in Baghdad.

There is no clear indication that the assassination fundamentally changes the three strategic challenges posed by Iran or U.S. policy toward them. More likely, it was a one-time event and does not indicate a major shift, such as the addition of a military arm to the U.S. “maximum pressure” campaign. The latter may have better odds of coping with strategic challenges but would require a systematic response to Iranian activity, and already the failure to respond to missile strikes on U.S. bases could indicate a return to the policies in place prior to the assassination of Suleimani. Moving forward, it is likely that Iran will seek to erode U.S. deterrence (re-established by the recent strikes on KH and Soleimani) through a continuous low-level campaign against the United States in Iraq, similar to that which Israel faces from Gaza, hitting just below the threshold of response.

The question of whether Suleimani’s death diminishes Iran’s capabilities will depend on other questions that have yet to be answered. For example, how institutionalized were his relations and activities with regional partners? How competent is his successor, Brig. Gen. Esmail Qaani? How will the assassination impact the perceptions of Tehran’s partners? Iranian officials may also proceed with greater caution after failing to correctly assess Trump’s reactions to their recent provocation, which resulted in the death of the country’s most high-profile military figure, but even that restraint appears limited. Yet, despite potential newfound tactical advantages, Washington has not indicated the intent to leverage them to establish a policy capable of coping with the strategic challenges posed by Iran. And so, despite the widespread fixation on Suleimani’s death, the trajectory of the U.S.-Iran relationship remains largely unchanged.

Ari Heistein is a research fellow and chief of staff to the director of the Institute for National Security Studies.

Eldad Shavit is a Senior Researcher at the Institute for National Security Studies (INSS) and previously served in senior roles in Israeli Defense Intelligence and the Prime Minister’s Office.