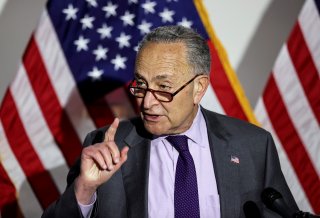 In the days and weeks leading up to the recent outbreak of violence in Jerusalem, there was growing optimism that the discourse was surrounding the Israeli-Palestinian conflict in the United States was changing. Two recent reports, one from Human Rights Watch (HRW), and another a joint project between the Carnegie Endowment for International Peace and the U.S./Middle East project appeared to acknowledge two increasingly undeniable realities: First, that the conflict is not and never has been fought on equal footing; it is a relationship between occupier and occupied, between oppressor and oppressed. Second, that the United States has utterly failed to play the part of “honest broker,” and that if the situation on the ground is to meaningfully change, the U.S approach will have to undergo a serious rethinking.

The events on the ground in the past weeks have only confirmed those conclusions. They have also put to the test whether Democratic elected officials, as a result of a number of factors, would be willing to broach what has long been a third rail in American politics and explicitly criticize Israel for its forced evictions and larger pattern of state-sanctioned human rights violations.

In the past, it has been a small group of Democratic lawmakers—notably Congresswomen Ilhan Omar, D-MN, and Rashida Tlaib, D-MI—who have been willing to call out the Israeli government, and, more importantly the United States’ responsibility in aiding Israeli actions. This time around the voices have grown louder.

Reps Tlaib and Omar were the most vocal in opposing the police violence and human rights violations taking place in Palestine, but were joined by a number of other legislators who denounced Israel, with some also lamenting that U.S. aid was aiding these policies and others challenging the Biden administration to live up to its promise of supporting human rights around the world.

Sen. Chris Van Hollen D-MD, added “If the Biden Administration puts the rule of law and human rights at the heart of its foreign policy, this is not a moment for tepid statements.”

It is also clear from certain Congressional statements that these events cannot be viewed in isolation, and must be viewed as a continuation of consistent Israeli steps that have made it more difficult to envision a resolution anytime soon.

“I was there in 2018 when bulldozers first arrived at Khan al-Ahmar. This isn't new. It is ramping up. And it must be stopped.” wrote Rep Pramila Jayapal, D-WA. Betty McCollum, D-MN, who has been one of the most consistent voices for Palestinian rights within Congress, asserted that “The Israeli government’s attacks on the basic human rights of Palestinians has led to this conflict.”

Each of the aforementioned members of the House of Representatives were also among the twenty-five signatories of a letter that called for the State Department to exert diplomatic pressure on Israel to end the forced displacement of Palestinians.

An emboldened right-wing Israeli government that is pursuing aggressive one-sided policies buoyed President Trump’s essentially unconditional support has opened the American left’s eyes to the racism and dehumanization that drives Israeli policies towards Palestinians. That reality, along with increased support among the party’s base for the Palestinian cause, and President Joe Biden’s pledge to put human rights at the center of his foreign policy agenda have made it possible for Democrats to more openly criticize Israeli aggression.

But a chorus of voices on the other side of this debate, those who were silent concerning the evictions in Sheikh Jarrah and subsequent Israeli violence towards Palestinians but were quick to condemn Hamas’ launching of retaliatory rockets, crystallizes the growing divide within the Democratic Party on this issue.

Freshman Rep. Ritchie Torres, D-NY,  who, prior to his election was called “an AOC-style progressive outsider,” tweeted “Firing rockets at civilians in Israel is an act of terrorism, period. The latest rocket fire underscores the need for missile defense programs, such as Iron Dome, which protects Israeli civilians—both Arabs and Jews—from the terrorism of Hamas.”

Steny Hoyer, the second-ranking Democrat in the House blamed Palestinians, not Israel, for the peace process’ failure, writing “The unjustifiable attacks by Hamas and Palestinian Islamic Jihad continue to jeopardize Israeli and Palestinian lives and hinder efforts for peace.”

And Brad Sherman, who made headlines in 2019 for saying he would oppose the use of American taxpayer dollars to fund annexation, wrote as part of three-tweet thread “I strongly condemn Hamas’ rocket attacks against Israel. There is no justification for indiscriminate rocket fire. This only further escalates the situation.” None of the three tweets (or any other sent out by Rep. Sherman) condemned or even referred to Israeli aggression.

A majority of the Democratic Congresspeople who issued statements spoke out against attacks carried out both by Israel and Hamas.

Ultimately, the decision over how to proceed will depend on the Biden administration. The response from President Biden and Secretary of State Antony Blinken has thus far hued far more closely to the latter group of legislators than the former. Echoing a sentiment that was present throughout many statements issued in recent days, a readout of Biden’s call with his Israeli counterpart says that the United States supports “Israel’s legitimate right to defend itself and its people,” while not raising any objection to Palestinians being displaced and killed by Israeli forces.

As others have noted, Biden had hoped to not focus on this question. But by continuing to blindly support Israel financially and standing to the side as Israel continues to oppress the Palestinian people, the United States is anything but a neutral actor in this conflict.

On this question, there is a serious divide within the Democratic party. If the situation in Jerusalem and elsewhere continues to deteriorate, where the administration stands will become clear. To this point, it has followed the same Democratic playbook of ostensibly supporting human rights and security for all while refusing to use leverage against Israel and in practice supporting the government’s every move. It remains to be seen whether internal pressure from an energized progressive wing can do anything to alter this calculus.

Blaise Malley is a freelance writer based in Washington, D.C., covering foreign policy. His work has appeared in The American Prospect, The American Conservative, Responsible Statecraft, and elsewhere. Follow him on Twitter @blaise_malley.