To Revive the Iran Deal, Biden Must Remove Trump’s Sanctions 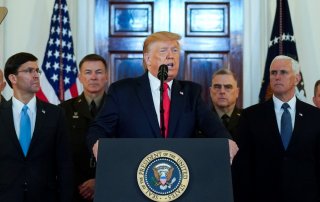 With talks in Vienna continuing between the parties to the Joint Comprehensive Plan of Action (JCPOA)—also known as the Iran nuclear deal—all eyes are on the United States and Iran. Though Washington and Tehran are not participating in direct talks yet, international allies and partners in the deal are acting as intermediaries in hopes of creating a roadmap to get both the United States and Iran back to full compliance. For the Biden administration, this will be a test of its stated goal to return to the deal and its resolve to face the specter of former President Donald Trump.

While some commentators and analysts make the path to return seem overly convoluted, and use legal jargon to confuse the average observer, the way back is fairly straightforward. In the same manner that Trump quit the deal in May 2018, President Joe Biden can rejoin the agreement through executive power.

There is reason to be optimistic that the Biden administration is fully aware that to rejoin the agreement, after years of violations, it will have to fully restore compliance with the deal. In a recent interview with PBS Newshour, Biden’s Iran Envoy, Robert Malley, stated: “We want to get Iran back into compliance. The United States knows that, in order to get back into compliance, it's going to have to lift those sanctions that are inconsistent with the deal [emphasis added].”

So why have such seemingly innocuous comments triggered panic among hawks opposed to negotiations with Iran? Because they thought that they had blocked Biden’s path back to the deal.

At the urging of hawks who oppose any diplomacy with Iran, including the JCPOA which set new standards for nonproliferation agreements, the Trump administration built a  “sanctions wall” that raised the political costs for returning to the deal.  As a result, the “nuclear” sanctions relieved under the JCPOA—including those targeting Iran’s financial and oil sectors—were duplicated and relabeled as “terrorism” sanctions.

The political calculus was simple—and transparent. Even if the Biden administration lifts sanctions on the Central Bank of Iran (CBI) as the United States did in 2015, Iran would derive no benefit unless the administration also tackles the cynical Trump sanctions that were duplicated under a different designation and imposed on top. To put it another way, imagine if you were given a double-life sentence and one was pardoned, would it make any difference?

In practice then, under this scenario, nothing would change for Iran in terms of sanctions relief and the Iranians would plainly have no incentive to return to their obligations under the deal—unless Trump sanctions are wiped out as well, providing opponents with a new bad faith line of attack.

Of course, observers have known this game was underway for years, thanks to numerous statements from architects of the sanctions wall broadcasting their intent. But all their efforts could not wipe out the president's authorities or change U.S. obligations under the JCPOA. What is a “nuclear sanction” is defined by the deal.

The evident failure of Trump’s “maximum pressure” policy aside, his administration also worked to undermine the ability of any incoming administration to rectify his mess. Iran, for its part, agreed to strict oversight of its civilian nuclear program, and limitations on enrichment and stockpiles to ensure that they could not and were not working towards a weapon. In return, they were promised lifting of sanctions that targeted institutions central to its economy, such as their financial sector, central bank, and oil trade.

However, after abrogating the deal in 2018, the Trump administration pursued a policy of crippling sanctions that not only targeted Iran but also punished other countries if they were to do business with Iran. Even as the world faced the crisis of the Covid-19 pandemic, and despite calls from human rights groups to ease sanctions, the Trump administration doubled down on its sanctions program targeting Iran’s entire financial sector. On the heels of a lost election, the administration further promised a “flood of sanctions,” which brutalized ordinary Iranians and were conceived by opponents of diplomacy with the stated purpose of creating an obstacle for President Biden to rejoin the nuclear deal.

But looking at Malley’s carefully worded response, and similar language from the State Department, the Biden team knows that for the deal to work Iran must receive the economic relief it was promised, in much the same way that for the deal to work for the United States, Iran must adhere to the limitations of the agreement and allow the same level of oversight. While the “sanctions wall” may seem to be a clever political ruse, it is one that the Biden administration, fortunately, appears to understand. It may take some time to work out the details and get both parties back to full compliance, but in order to repair Trump’s foreign policy failures, Biden must remove Trump’s sanctions on Iran.

Assal Rad is a Senior Research Fellow at the National Iranian American Council. She received her Ph.D. in history at the University of California, Irvine. Follow her on Twitter @assalrad.