Is Russia Trying to Play Kingmaker in Lebanon? 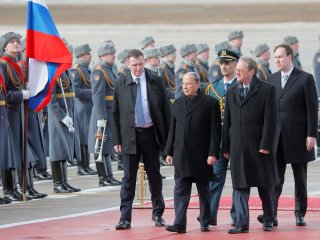 In the backdrop of Russian police rounding up the country’s own politicians and journalists at a peaceful conference, it seems only fitting that Russia’s Foreign Minister Sergei Lavrov welcomed a Hezbollah delegation in Moscow. After all, Hezbollah has its own distinguished history of harassing and killing opposition journalists. Unlike Western states, the Kremlin does not consider the Iran-backed and Lebanon-based Hezbollah a terrorist organization. Lebanon important to Vladimir Putin’s aims to expand Russian influence In the Middle East. The country is now in the midst of its worst economic and political crisis in decades and experts note that Hezbollah is losing popular support. Is Moscow now trying to play kingmaker in Lebanon by using Hezbollah?

The first time a Hezbollah delegation came to Moscow on an official visit was in October 2011, upon Moscow’s invitation. Few details of the visit were made public, but reportedly Hezbollah, for its part, wanted to enhance cooperation on “issues of mutual concern.” These likely included Syria and Moscow’s support for the Assad regime. Now, just as in the past visit, Lebanese parliamentarian Muhammad Raad of the Loyalty to the Resistance bloc headed the delegation in Moscow. Again it was Moscow that invited Hezbollah. And, as ten years ago, few details of the visit are available. In response to a question about the meeting Russian Foreign Affairs Ministry said laconically, “We confirm the fact of the meeting.” Raad told Hezbollah’s Al-Manar the meeting focused on how to “strengthen stability in Lebanon and Syria and the achievements that were made against terrorists.” The meeting also comes about a week after Lavrov met with Lebanese prime minister Saad Hariri as part of Lavrov’s trip to Abu Dhabi, where the two officials discussed Syria and strengthening Russian-Lebanese ties.

For Moscow, Lebanon, a strategic country on the Mediterranean, is important both as an extension of Putin’s Syria interests and in its own right. Moscow supported Hezbollah in the 2006 war in Lebanon as part of broader efforts to improve Russia’s relations with Tehran and undermine the peaceful pro-democracy 2005 Cedar Revolution. Putin saw these events as an extension of Western effort of fomenting “color revolutions,” chiefly in the post-Soviet space, to unseat corrupt and authoritarian regimes—including his own. In Lebanon in particular the Cedar revolution threatened to weaken Hezbollah and Syrian influence in Lebanon, as well as strengthen that of the West; Putin could not sit idly by.

Fast-forwarding to Putin’s intervention in Syria—planned most likely during another Hezbollah visit to Moscow, when in July 2015, the  Iranian Revolutionary Guard Commander—and Hezbollah master— Qassem Suleimani opened a map to show that Assad was in danger of falling. Moscow then deepened its cooperation with Iran and Hezbollah, whose members fought side by side with Russian forces, coordinated with and learned from them. Moscow also armed Hezbollah, while Russian ambassador to Lebanon Alexander Zasypkin praised Hezbollah in February 2019 for its actions in Syria. “The [Hezbollah] party took a responsible approach to what was happening in Syria and the region as a whole and contributed significantly to terrorists’ defeat,” he said.

In this context, Moscow also deepened its ties with Lebanon, including in the military sphere. It does not surprise that in the wake of this summer’s tragedy of a massive explosion in the port of Beirut that laid bare the corruption and incompetence of the ruling elite and led the Lebanese into the streets to demand fundamental political change, Putin worked to preserve the political status quo. The kind of reform protestors envisioned would cause Putin to lose influence.

That Lebanon remains in crisis, though, is not necessarily bad news for Putin, especially because at least in the short-term, the Lebanese protestors have not achieved the reform they envisioned, while much remains uncertain in terms of what pressure the West is willing to exert when it comes to upcoming nuclear talks with Iran. If Lebanese Hezbollah comes to Moscow at a time when it is weak, then Putin could use the situation to shape the future political outcomes in the country in a way that suits his interests. Western policymakers would be wise to deny Putin such opportunities, pay more attention to Lebanon and draw clear lines when it comes to Iran and Hezbollah.

Anna Borshchevskaya is a senior fellow at the Washington Institute for Near East Policy focusing on Russia’s policy towards the Middle East, and author of the upcoming book, Putin’s War in Syria: Russian Foreign Policy and the Price of America’s Absence

The Dangerous Ahmadinejad Visit to Lebanon