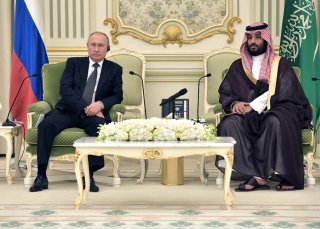 The Biden administration’s emerging nuclear deal with Iran is not sitting well with Saudi Arabia.

According to Dan Eberhart, CEO of Canary, a Denver-based drilling-services company, it is definitely not a coincidence that the Saudi’s oil-production cut threat comes as President Joe Biden is heading toward reviving a 2015 nuclear deal with Iran, which offered sanctions relief in exchange for curbs on the country’s nuclear program. The original agreement, however, quickly unraveled after then-President Donald Trump unilaterally withdrew from it in 2018 and reimposed sanctions.

“Such an agreement would provide economic relief to Tehran and, to a lesser extent, global oil markets by unleashing about one million barrels a day of Iranian oil exports that Western sanctions have throttled. This development, along with concerns about an economic recession, rising inflation, and weaker demand, has helped drive oil prices below $100 a barrel,” Eberhart wrote on Forbes.

“It's no secret that Biden wants oil prices, the main driver of inflation, to fall ahead of the midterm elections in November. The President has often pleaded with Saudi Arabia—most recently in mid-July during a visit to Riyadh—to help by adding more supply. But Saudi leaders have resisted Biden's requests. That has left Iran as the only path to increase the amount of oil in the market. Biden is taking this path, but he's now seeing the consequences,” he continued, adding that it appears that Saudi Arabia wants to put an oil-price floor of $100 a barrel going forward.

“Russia …needs higher oil prices because U.S. and European Union sanctions have hurt its ability to produce and export oil. Moscow must sell its barrels at a steep discount of $30 a barrel to find willing buyers in Asia as Europe turns its back on Russian energy and Western sanctions tighten on the Russian economy,” he wrote.

“That means the recent drop in oil prices has been especially harsh on Moscow since its oil profit margins have shrunk substantially. The situation could become direr as the West discusses a price cap system for Russian oil to punish Moscow for its invasion of Ukraine. But the Saudis still see Russia as a critical member of OPEC+ group and an essential ally in the Middle East—more important than America under Biden,” Eberhart continued.

The key takeaway is that “even if the United States and Iran broker a nuclear deal, how much of a positive impact will it have if OPEC+ pares back production to keep prices from falling below $100? Any hope of sub-$90 oil for a prolonged period seems unrealistic under current market conditions,” he concluded.