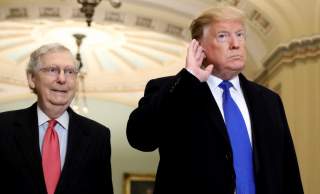 With one drone strike in Iraq, the Trump administration may have pushed the United States down a path that leads to another war in the Middle East. Indeed, the decision to kill Qassim Suleimani, the commander of the Islamic Revolutionary Guard Corps overseas forces and the second most important person in Iran, not only represents strategic malpractice but also marks the end of the administration’s pursuit of a realist foreign policy.

After two decades of wars in Afghanistan and Iraq, which have cost nearly seven thousand American lives and $6 trillion, America desperately needs to reorient itself toward a foreign policy of realism. Realists believe that nations exist in a fundamentally competitive world where power calculations above all else drive the behavior of nations. They seek to maintain a balance of power so that no country is tempted to use force to fundamentally change the status quo, do not attempt to impose their way of life on others, and only commit their nation’s resources when its vital interests are threatened. Realists would not have tried to democratize Afghanistan, invaded Iraq, or intervened in places such as Libya where only peripheral interests were at stake. Realism is uniquely suited to serve as America’s lodestar as it navigates the coming era of great power competition with China and Russia.

The Trump administration seemed to understand this. Its National Security Strategy put forth “a strategy of principled realism” that was “realist because it acknowledges the central role of power in international politics, affirms that sovereign states are the best hope for a peaceful world, and clearly defines our national interests.” This past May, Secretary of State Michael Pompeo argued that while previous administrations “had drifted from realism” President Donald Trump “has no aspiration to use force to spread the American model.” Instead, Trump’s foreign policy was one of “realism, restraint, and respect.”

How has an administration that consistently endorses realism moved to the precipice of an unnecessary war with Iran that would distract from the need to focus on China and Russia? Simply put, it is because the Trump administration failed to appreciate the most important tool in the realist’s toolbox—diplomacy.

For realism’s founding father, Hans Morgenthau, it was important to understand not only why states behave the way they do but also how to apply the levers of national power to get them to change their policies. In Politics Among Nations, the canonical realist text, Morgenthau established the principles of realism and provided a toolkit to enable policymakers to further their nation’s interests. He listed eight elements of power, among them geography, natural resources, industrial capacity, military preparedness, and population size. One factor, though, surpassed all others in importance: the quality of a country’s diplomacy.

Diplomacy, for Morgenthau, was the “brains of national power” because it blends all of the other components of power “into an integrated whole, gives them direction and weight, and awakens their slumbering potentialities by giving them the breath of actual power.” Able diplomacy ensures that the ends of a country’s foreign policy are consistent with the means at its disposal and increases the potency of the other factors of national power. A nation could enjoy the best geographical location, the most bountiful natural resources, a world-class military, and the most advanced industries, but without diplomacy up to the task in the long-run it would likely squander these advantages.

The Trump administration, however, has all but written off professional diplomacy. The president consistently attempts to slash the State Department’s funding, even as he signs into law record defense budgets. The administration has retaliated against career diplomats and left important diplomatic posts vacant. The result has predictably been plummeting morale at the State Department. Former deputy secretary of state William Burns summed up these worrying trends by recently writing, “I’ve never seen an attack on diplomacy as damaging, to both the State Department as an institution and our international influence, as the one now underway.”

This dismissal of diplomacy has led to a policy toward Iran that no realist would endorse. Trump viewed the nuclear deal with Iran as fatally flawed, and while his critique has merit a realist would not have withdrawn from the agreement and imposed crippling sanctions on Iran without offering a diplomatic off-ramp to Tehran. Instead, a realist would have empowered diplomats to leverage the other elements of national power to negotiate a deal that secures America’s vital interests. In this case, such a deal would prevent Iran from developing a nuclear weapon, force the country to curtail its development of ballistic missiles, and compel it to rein in the behavior of its proxies in the Middle East. While the unstated goal of the Trump administration has been regime change, a realist would place less emphasis on who governs Iran and instead prioritize shaping Iranian foreign policy. A realist would seek to minimize the chance of war with Iran so that America can focus its energies on gearing up for long-term competition with China and Russia.

This absence of diplomacy brings us to where we are today. The United States used economic warfare against Iran in an attempt to achieve its maximalist goals. Iran, backed into a corner and unable to see a diplomatic path out of its predicament, used its proxies to attack American personnel in the Middle East. Unwilling to consider diplomacy, the United States responded militarily and ultimately killed Iran’s second most powerful man. A realist would have understood that while Suleimani had the blood of American soldiers on his hands killing him only brings America closer to an undesirable war with Iran and puts more American lives at risk.

Two former senior Trump administration officials, in a recent article extolling the administration’s realist credentials, conceded that starting a war with Iran would be “antithetical to success in a world of great-power competition.” They are correct, and with the assassination of Suleimani, Trump risks a war with Iran that would likely derail America’s effort to address the urgent challenge posed by China and Russia.