Support Iranians By Reviving the JCPOA 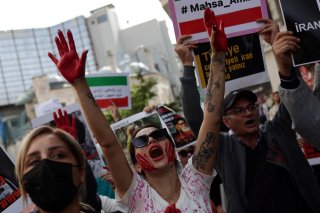 Protests in Iran have raged day and night since Mahsa Amini’s death on September 16, three days after she was arrested by the morality police. The circumstances surrounding Amini’s death are horrible, and the proceeding outcry has inspired many calls for the United States to stand with the Iranian people, specifically by abandoning the talks to revive the Joint Comprehensive Plan of Action (JCPOA). While noble in its conviction, abandoning the deal isn’t in the American interest, especially when such a decision will not alleviate the suffering of the Iranian people.

There are multiple reasons for the United States to continue pursuing a JCPOA revival. First and foremost, the Biden administration’s greatest concern regarding Iran is prohibiting the regime from acquiring nuclear weapons. However, this interest goes beyond the current government’s behavior. Iran’s insecurity and competition with rivals for regional hegemony will persist no matter who controls the country. Indeed, a nuclear-armed Iran, regardless of the regime, would still inspire Saudi Arabia to pursue nuclear weapons and cause Israel to either declare theirs or move to stop Iran militarily—risking a regional conflict. Neither a Middle East with multiple nuclear powers nor regional war is in the U.S. national interest.

Second, abandoning the nuclear negotiations in support of protesters chanting “death to the dictator,” “death to Khamenei,” and calling for the end of the Islamic Republic will signal to Iran that the United States desires regime change more than thwarting a Middle Eastern nuclear arms race. This will only reinforce the regime’s rationale for acquiring nuclear weapons.

Third, despite claims that the JCPOA will provide an economic lifeline to the regime, it will benefit protesters more. Under “maximum pressure,” the Iranian economy contracted nearly 5 percent in 2020. Unemployment reached 12.4 percent in 2021, with a 30 percent economic inflation rate. The rial has lost 68 percent of its value since 2018, and GDP has shrunk by 6.5 percent. Meanwhile, Iran has a functioning “sanctions economy.” The Islamic Revolutionary Guard Corps (IRGC) and regime elites have used bonyads, or charitable foundations controlled by the government, to plant IRGC loyalists on company boards and facilitate legal and illicit revenue streams to increase their financial power while leaving the harshest repercussions for ordinary citizens—particularly middle-class women.

According to Esfandyar Batmanghelidj, the founder and CEO of the Bourse and Bazaar Foundation, while protests are currently intense and becoming more frequent, the economic woes and debilitated economy ultimately hinder the ability for protests to last. People cannot afford to mobilize for long. Additionally, advocacy groups and charities lack the resources to help. Furthermore, the institutions protesters hope to reform are left too compromised to respond and change.

Additionally, sanctions create long-term damage. In a recent article, Trita Parsi references a 2010 report by Dursun Peksen and Cooper Drury which supports the argument that the long-term effect of sanctions is the erosion of human capital and the value for legal norms, which are the building blocks for a democratic system. Parsi also references his own co-authored report from 2012, which argues that of the thirty-five authoritarian states to transition to democracy between 1955 and 2000 successfully, only one did so under broad economic sanctions. The “maximum pressure” sanctions could produce decades more suffering for the Iranian people. The best way to support their protests is to finalize the JCPOA’s revival and remove the sanctions.

Finally, the United States must continue negotiating the JCPOA because Washington must deal with the world as it is, not the way it prefers it to be. Despite the protests’ escalation—spreading across nineteen Iranian cities and inspiring a petrochemical sector strike in the Bushehr Province—the administration cannot assume current Iranian protests will end in regime change. While the protesters' goals are significantly different from those of previous movements, a revolution may not ensue immediately from this moment.

The movement currently lacks leadership and centrality. The lack of central leadership undermines the call for regime change because no suggested replacement exists. While the Islamic Revolution had separate factions, by the time it succeeded, there was a central figure to anoint as the leader. That leader, Ayatollah Ruhollah Khomeini, lived in exile for fifteen years after first calling for the shah’s overthrow in 1963. The events directly attributable to his rise to power and return to Iran, usurping the shah, took over a year. The United States cannot assume a revolution will happen quickly, if at all.

Consequently, given that the regime’s fate—as well as what replaces it—is unknown and out of America’s control, preventing a nuclear arms race in the Middle East should remain the priority. Additionally, considering the chaos that followed regime changes in Iraq, Afghanistan, and Libya and the improbability that a functioning democracy would replace the clerical leadership, removing fissile material from Iran per the JCPOA before a revolution should also be a priority.

First, the United States must remain committed to reviving the JCPOA. Negotiations between the two nations have not gone well—relying on shuttle diplomacy rather than face-to-face meetings. One holdup is Iran’s desire for a guarantee that a future administration won’t unilaterally abandon the deal like former President Donald Trump did in 2018. Looming midterm elections already paint a grim picture for Democrats. Losing either Congressional house could signal to Iran that the next president could be a Republican and less likely to adhere to a deal. Abandoning negotiations now could be the last opportunity to revive the agreement.

Finally, the United States must prepare a plan for helping Iranians if a revolution occurs. The long-game approach would be to stimulate the economy for the Iranian middle class by eliminating broad sanctions. Additionally, since there is no guarantee that a JCPOA revival will happen, Congress must create a series of mechanisms to lift sanctions quickly if the regime falls. Any new government would have a low likelihood of success if burdened with the same sanctions Iran now faces.

The best way to support protesters is to eliminate the economic restrictions narrowing their chances for future success.