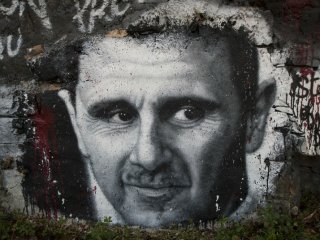 Syrian president Bashar al-Assad was "re-elected" to a fourth seven-year term on Thursday afternoon via a corrupt process so predictable that no one was surprised by it.

Syrian state-run news agency SANA announced the supposed victory within twenty-four hours of the final votes cast. According to the official tally, Assad won with 95.1 percent of the vote, or 13.5 million votes in total. Opposition candidates Mahmoud Ahmad Marei and Abdullah Sallum Abdullah garnered 3.3 percent and 1.5 percent of the vote, respectively.

Some outside observers have admitted mild curiosity, to put it nicely, at the implication that fourteen million votes were cast since the election was not held in Turkish, Kurdish, and rebel-controlled areas along Syria’s northern and eastern borders. The same observers have also noted that the pre-war population of Syria was 21 million, and more than six million left the country during the war, raising questions about how there could have been more votes than adult voters to cast them.

Still, according to state-run media at least, most Syrians do not seem concerned by these small details. Within moments of the results’ announcement, the press agency insisted that throngs of the president’s supporters had gathered in regime-controlled areas to celebrate.

A History of Sham Elections

Syria is not known for its competitive elections—just like most totalitarian states.

Assad’s father, Hafez al-Assad, won each of his five elections with more than 99 percent of the vote—but only after he participated in a few coups. In 1999, one year before his death, the elder Assad was re-elected with 8.9 million votes in favor and 219 against. Bashar al-Assad, the second son of Hafez, previously won elections in 2000 and 2007 with results of 99.7 percent and 99.8 percent. Against this backdrop, a meager 95.1 percent is cause for alarm, but the president’s popularity, just momentarily drawn into question when large segments of his country revolted, according to the government at least, appears to be increasing again. In 2014, as Syria’s civil war reached its climax, Assad scraped out a win with only 92% of the vote.

In spite of these excellent sham election results, neither of the Assads managed to break the record set by neighboring Iraq’s long-time ruler Saddam Hussein, who won his 2002 election with 11.4 million ballots cast in favor and none opposed—100 percent of the vote.

It is not yet known if Assad plans to run for re-election in 2028. The odds are high that he will and rely on the same corrupt tactics that have kept him in power for so long.