Syria Could be Turkey’s Vietnam 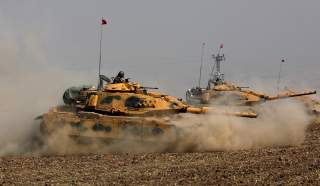 President Recep Tayyip Erdoğan’s is once again threatening to invade northeastern Syria and, late Sunday night, President Donald Trump greenlighted a Turkish operation. While Erdogan has threatened to send troops into the Kurdish-governed area more than a dozen times before, this time he appears serious: His economy is teetering, he suffered a blow to his prestige when the opposition party won Istanbul twice, and he is in desperate need of a distraction.

Erdoğan may talk about a terror threat emanating from northern Syria, but he has yet to prove that one exists. Quite the contrary: Not only were Syrian Kurds the most effective indigenous fighting force against the Islamic State, there is also overwhelming evidence that Turkey cooperated, profited from, and at times coordinated with Syria’s Al Qaeda affiliates and the Islamic State.

The Kurdish administered regions of Syria are the most secure and tolerant within the country. Erdoğan’s desire to conquer them has far less to do with supposed terrorism, and more to do with a desire to expand Turkey’s borders, eradicate the precedent of any Kurdish self-governance not subordinate to Turkish dictates, and to grab local oil wells. Turkey occupied over one-third of Cyprus more than forty-five years ago and now seeks to loot its natural resources. It has ethnically cleansed Syria’s Afrin district, and has opened civilian Turkish post offices in Jarabulus, Syria, as it increasingly treats conquered territories as its own. In Bashiqa and elsewhere, Turkey occupies outposts in Iraq from which it refuses to leave. Erdoğan has spoken about reclaiming territory from Greece and Bulgaria, and Turkish maps increasingly include large chunks of territory belonging to Turkey’s neighbors.

Erdoğan believes conquest will be easy. Trump has little desire to fight another Middle Eastern war and, like Obama before him, tends to believe the assurances of Erdoğan over evidence and the advice of his aides. Senior Trump administration officials say privately the logic which Special Envoy Jim Jeffrey operates under is that with withdrawal inevitable, any promise he can solicit from Ankara is gaining something for nothing. But even if Jeffrey does not give Turkey diplomatic cover, he is correct that U.S. forces may evaporate in the face of a Turkish onslaught.

Erdoğan may be cocky, but he could be falling into a trap. Turkey’s drones may give it a qualitative military edge in mountains and rural regions but may be of substantially less utility in the northern Syrian cities if limiting collateral damage is any concerns. The Kurds have extensive experience fighting on the ground. Meanwhile, recent political purges of the Turkish military make the Turkish Army a shell of its former self. With Kurdish insurgents voluntarily going into Syria at Turkey’s request as part of the previous peace agreement, Syrian Kurds simply have no place to go. A century ago, Turkish forces slaughtered the Armenians by marching them into the desert to their deaths; the Kurds refuse to be the sequel. Turkish invasion and ethnic cleansing—Turkey’s stated purpose is to settle a couple million Arabs in the region—will spark insurgency in northeastern Syria and across Turkey.

Even if the Turkish military makes initial gains, Erdoğan’s greatest mistake may be his belief that a fight between Turkey and Syrian Kurds will remain limited to that. Turkey has engaged in proxy warfare in the Gaza Strip, Libya, and political warfare against Saudi Arabia. Erdoğan may champion press freedom in the Washington Post but, in reality, he is its greatest opponent. While Saudi Arabia’s murder of Jamal Khashoggi is abhorrent, Erdoğan’s interest has only been using the episode as a means to delegitimize Saudi Arabia in his quest to acquire the prime leadership role the Islamic world and, ultimately, stake claim to internationalization under the Organization of Islamic Cooperation of Mecca and Medina.

On my last visit to northeastern Syria, I was surprised by the presence of Saudi defense and intelligence officials. As proxy warfare spreads across the region, it is reasonable to guess that Saudi authorities might provide weaponry and intelligence to Syrian Kurds to bleed Turkey, if not destabilize the country internally. As Erdoğan and Turkish intelligence proxies like the private contractor firm SADAT have supported Hamas, Israeli authorities, too, might believe that they have an interest in supporting Turkey’s Kurds militarily. So, too, might Greece and the Assad regime in Syria, both of which helped and supported Kurdistan Workers Party (PKK) leader Abdullah Öcalan in the past for much the same realpolitik reasons. Syrian Kurds have suffered at the hands of both Assad and Turkey but say that if forced to choose between the two, then they would choose Assad over Erdoğan any day.

Turkish forces might march into Syria with the arrogance that the Red Army invaded Afghanistan, or the United States entered Vietnam. As both Moscow and Washington both learned, getting in was far easier than getting out.

Erdoğan may believe striking a blow against Kurds while confiscating their oil is a win for Turkey, but he is wrong. He is simply opening the door for a war of attrition Turkey cannot afford and which it ultimately might lose.