Syria is a Distraction from Great Power Competition 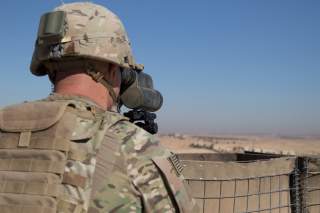 President Donald Trump’s sudden order to withdraw from Syria has kicked up a firestorm of protest amongst Washington DC’s foreign policy establishment. However, it is strange that the same establishment that has embraced an “era of great power competition” would categorically oppose a withdrawal. If the United States must bring to bear all of its national power against a revisionist Russia and China, then we must consider leaving Syria. As tragic as the civil war has been, Syria remains a relative strategic backwater, especially when experts are considering the need to once again engage with hostile powers in Eastern Europe and East Asia.

The current debate over Syria fails to reflect the fact that the stakes of foreign policy debate have been raised. 2018 is the year of the “Return to Great Power Competition.” Across government agencies, think tanks and the partisan landscape, the idea that the United States must focus on competing with China and Russia has caught like wildfire. Significantly, the tenor of that debate is dire. Active and determined competition is necessary, as the National Defense Strategy Commission (NDSC) argues, because America faces defeat and disaster on its periphery. To match the challenge, the NDSC and multiple other analysts and agencies recommend increasing already record defense spending and investing in new capabilities, including adopting high-risk doctrines for the use of nuclear weapons.

If the state of world politics is such that America faces destabilizing threats and increasingly risky conflict, then the United States must withdraw from Syria. In fact, the United States should take stock of all its commitments and choose the ones that only enhance its security as it rebalances to new threats. We already see the wear and tear that deployments to Middle Eastern battlefields inflict on our forces. Our navy is suffering from lack of maintenance and rest. The air force struggles to maintain readiness after running constant sorties over distant desert battlefields. Trillions of dollars have been wasted on nation-building boondoggles. Tens of thousands of service men and women, including tens of thousands of contractors that often go uncounted, have bled and died in a cycle of endless war that has only destabilized the regions it has touched. The United States has become less powerful and seemingly more vulnerable the more we have engaged in the Middle East.

We should not be surprised by these results. Great powers have often suffered in their competitions with other great powers because of lesser military distractions for which they lack strategic foresight and no clear exit strategy. America experienced this in Vietnam. Athens’ armies starved at the walls of Syracuse. Napoleon’s Spanish ulcer bled until 1814. Britain suffered setback after setback at Kut and Gallipoli. Relevant for the United States today, the USSR broke the Red Army in Afghanistan. In each case, the aggressive power lost sight of a grander strategy and as a result became more vulnerable to more important threats. Despite lessons of history and the costs of seventeen years of war in Afghanistan, Iraq and Syria, many of the loudest voices heralding the return of great power competition also call for us to stay engaged in brushfire war.

That the foreign policy establishment cannot recognize the tension between perpetual war and the implications of destabilizing great power rivalry shows a lack of imagination and focus. American strategic over-commitment to nonstrategic conflict will continue to hamstring efforts to focus on the transformational changes happening in international affairs. Analysts and scholars worried about pursuing great power competition with China and Russia must learn to choose their battles. The United States cannot simultaneously answer calls to fully-eradicate ISIS, conduct regime change in Venezuela, remove Assad, denuclearize North Korea, and prepare for a nuclear arms race with two massive militaries on opposite sides of Eurasia. Yes, Trump’s withdrawal is impulsive and ill-defined. So are the suggested alternatives.

Kerby Davis is the Northern Regional Director for the John Quincy Adams Society.