A Syria Safe Zone Will Create More Problems Than It Solves 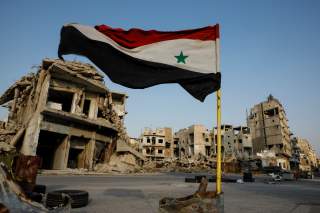 After months of stalemate, Turkey and the United States have agreed to establish a joint operations center to coordinate efforts to carve out a safe zone stretching more than 250 miles along Syria’s northeastern border with Turkey. Much of the region is controlled by the Syrian Kurdish militia that Turkey considers to be a terrorist organization, but which played a key role in the U.S.-led fight against ISIS. In the last few years, Turkey launched two military incursions into the area to drive back the Kurdish People’s Protection Units (YPG) forces from the border and Turkish president Recep Tayyip Erdogan said a third incursion into YPG-controlled northeastern Syria, where hundreds of U.S. troops are stationed, was imminent. With the recent deal, a major point of contention between the United States and Turkey seems to be softening. Down the road, however, disagreements will flare up. For any deal in northeastern Syria to work, it has to provide a sustainable solution to U.S. and Turkish security interests and address Kurdish concerns. The current agreement fails on all counts.

Although the announcement by the two countries left out key details, including who would control the zone and how deep into Syrian territory it would extend, Turkey’s Minister of Defense Hulusi Akar said the United States is getting closer to Turkey’s views on the safe zone. Turkey has long pushed for at least a twenty-mile-deep zone that would be off limits to YPG forces and expressed a preference to control it alone. If those are indeed the parameters of the proposed zone, it will create more problems for all parties involved.

Safe zones are generally established to protect people in conflict zones and are usually designed to be neutral, demilitarized, and focused on humanitarian purposes. Imposing a twenty-mile-deep safe zone east of the Euphrates would have the opposite effect—likely displacing more than 90 percent of the Syrian Kurdish population, exacerbating what is already an extremely challenging humanitarian situation, and creating an environment for increased conflict that would require an extended deployment of military forces.

The proposed safe zone will hurt U.S. interests as well. The United States has been trying to prevent the resurgence of ISIS, protect those who fought it alongside the Global Coalition, and thwart Iranian efforts to use the area to propagate its sectarian activities and directly threaten others. The U.S.-backed Syrian Kurdish forces are the most effective fighting element in Syria against ISIS. Their presence promotes stability and the return of local governance, which is key to prevent the resurgence of ISIS, and their control of the area shuts down facilitation, movement, and resources that ISIS requires to achieve its objectives. Implementing a safe zone that would drive Kurdish forces out would likely disrupt those efforts.

Turkey has a well-established and widely recognized interest in ensuring that areas along its border cannot be used as a platform to attack Turkish citizens. Ankara claims that the presence of Kurdish forces in this area poses a security threat to Turkey. While there continue to be some incidents along the border, these are low level and low impact, and there is no evidence to suggest the area is being used as a platform to attack Turkey. When combined with a small coalition presence, the United States is able to heavily influence the Kurdish forces, and by extension help assure the security of the Turkish border areas.

The people of northeast Syria have interests as well, such as recovery from years of conflict, protection from attacks, and an opportunity to live in peace. Displacing the Kurdish population will not only deny them these rights, but also create further conflict.

What is needed is not a safe zone, but rather a sustainable security mechanism that addresses the specific concerns of all the parties involved and creates a structure that monitors and controls security operations while also facilitating communication among all sides. It will not be perfect, and no one will be completely satisfied with the arrangement, but this is the only viable way forward. This arrangement must include accommodations by the Kurdish forces to allow vulnerable areas to be jointly patrolled, the removal of heavy weapons to safe distances away from the border, and the dismantling of security positions along the border. Turkey must refrain from insisting on permanent forces in the area and work closely with the U.S.-led coalition on combined patrols, surveillance, and jointly manned checkpoints at critical locations on the border.

The United States and the coalition must continue to exert their influence and be the trusted partner that ensures the interests of the various parties are observed. There are myriad issues that will have to be addressed (including the necessary return of refugees currently in Turkey)—and they can be—but we must first have an agreed security mechanism in place. We have this in Manbij and in the southern Syrian enclave of Al Tanf, where the coalition worked with Russia to ensure the safe delivery of humanitarian aid to refugee camps. None of these models are perfect, but they are working and creating a more stable and secure environment that will give diplomacy a chance to pursue longer-term political solutions.

But the ideal solution to the security dilemma of all parties involved is for Turkey to resolve its domestic Kurdish problem peacefully. While conditions in Turkey might not be ripe for that at present given Erdogan’s electoral vulnerability and reliance on the nationalists, the United States must remain diplomatically engaged to encourage a peaceful solution.

Gönül Tol is the founding director of The Middle East Institute’s Center for Turkish Studies. She is also an adjunct professor at the George Washington University’s Institute for Middle East Studies. A former adjunct professor at the College of International Security Affairs at the National Defense University, she has taught courses on Islamist movements in Western Europe, Turkey, world politics, and the Middle East, and has written extensively on Turkey-U.S. relations, Turkish domestic politics, foreign policy and the Kurdish issue.

Gen. Joseph Votel served as commander of U.S. Central Command (CENTCOM) from March 2016 to March 2019. As commander of CENTCOM, Votel oversaw military operations across the region, including the campaign against the Islamic State in Iraq and Syria. Before CENTCOM, he was the commander of the U.S. Special Operations Command (SOCOM) and the Joint Special Operations Command (JSOC). He was the commander of the 75th Ranger Regiment when they deployed to Afghanistan in 2001 and Iraq in 2003. While assigned to the Pentagon, he organized the original IED Task Force that eventually grew into the Joint Improvised-Threat Defeat Organization (JIDO). He has extensive operational experience across the Middle East, Levant, Central and South Asia, Northern Africa, and the Horn of Africa. General Votel will be joining the Middle East Institute (MEI) on July 1 as a non-resident Distinguished Senior Fellow on National Security.