To Take on Iraq’s Pro-Iran Militias, al-Kadhimi Must Go Beyond Politics 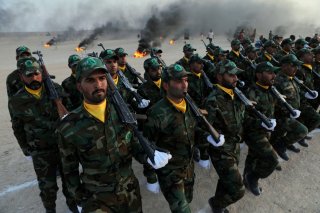 Iraq’s Prime Minister Mustafa al-Kadhimi has made the restoration of Iraq’s sovereignty a key priority on his agenda for the country. Included in this is an attempt to curb powerful Iran-backed militia factions of the Popular Mobilization Units (PMUs) which threaten to prolong Iraq’s insecurity. Kadhimi has launched a political containment strategy towards this end, which seeks to rally diverse political and religious actors against the militias so as to isolate them politically. The results of this strategy mean that the PMUs are slightly better contained than before Kadhimi came to power. Yet the limits of this approach are that it neglects the economic basis through which the militias are able to procure weapons, recruit members, and launch attacks independent of their Iranian sponsors. To combat this, Kadhimi must launch an economic containment strategy in tangent with his political containment approach if he is to meaningfully constrict the militias and improve Iraq’s security.

Through repeated attacks of projectiles and improvised explosive devices (IEDs) on Iraqi Army and Coalition troop bases and convoys, the powerful pro-Iranian PMUs such as Kata’ib Hezbollah, Asa’ib Ahl al-Haq (AAH), and the Badr Organisation (Badr) enjoy operational freedom that allows them to act with virtual impunity. Making it clear from the start of his tenure that Iraq would no longer tolerate the impunity enjoyed by the militias, Kadhimi has sought to “rein in” the militias through a gradualist policy of chipping away at their capacity and popular legitimacy. He has attempted this through political coalition-building, by bringing together actors from across the country’s political and religious landscape to form a cross-sectarian front against the pro-Iranian militias. For example, Kadhimi has managed to rally much of the Sadrist movement, Grand Ayatollah al-Sistani and his followers, the tribal leaderships, the overwhelming majority of the Sunni community, the Kurds, and Ammar al-Hakim’s new Iraqi coalition behind his policy of containing the Iran-backed militias. And it is worth mentioning that this rough coalition feeds off the energy of the mostly Shia protesters calling for an end to militia presence.

However, because of the intimate co-dependence of political influence with economic power in Iraq, the pro-Iranian militias have exploited vulnerabilities in the economic sphere. In areas that they recaptured from ISIS, the formal economy was destroyed, encouraging a massive growth of illicit economic activity. The pro-Iranian militias, as recipients of defense funding, were able to bribe local officials into colluding with them, effectively extracting revenues from the control of informal economies in return for a guarantee of protection. A lack of central oversight of the local governorates combined with low-grade public sector salaries made these illicit networks attractive to local officials for collaboration with militias. In the border regions, pro-Iranian militias took over the old Ba’athist oil smuggling routes to Iran, Syria, and Turkey often with no intervention from the Iraqi Ministry of Oil. Illegal tolls on civilians at checkpoints along these routes are another money-maker that is not centrally ordained but run by individual militias. For example, in the Diyala governorate, AAH were once said to be generating around $300,000 a day through checkpoint fees alone. Illegal customs regimes by militias levied taxes on goods traveling between Kurdish and Arab Iraq, which at one time generated Badr $12-15 million a month. At the same time, militia units are known to evade customs on taxable goods at the border with Iran by bribing border guards.

Comparatively, in Basra, militia commanders form a kleptocratic class of elites affiliated with local party officials, akin to a mafia. This ensures that a large portion of the profits of the country’s most productive oil region is pocketed by a ruling local oligarchy rather than finding their way to the state treasury. The entrenchment of the pro-Iranian militias into regional economies in collusion with local officials leaves them financially independent at the local level, supported by a network of state collaborators—in corrupt officials—and non-state agents—in the smugglers and henchmen. These agents continue to profit from activities such as smuggling and extortion in what is a prime characteristic of the political economy of modern Iraq.

When the extent of these activities is considered, the pro-Iranian militias begin to look more like a quasi-state than a security force. This is because of the depth of their economic entrenchment, and it is this dynamic that Kadhimi must account for in his militia containment policy. Focusing solely on the political and security stronghold of the pro-Iranian militias neglects their ability to sustain economic lifeblood independent of the state or Iranian support. However, since the militia’s economic rentier strategy is dependent upon the senior links and networks developed by the Fatah Alliance in parliament, economic containment of the PMUs must go hand in hand with a continued de-politicization of Iraqi ministries and institutions such as the police and regional governorate administrations.

If Kadhimi wants to erode the militias’ base so that they may be talked into reform, he will have to disentangle the intimacy between economic acquisition and local political influence. The militias are here to stay, but Kadhimi can shape their incentives and economic capacity to launch attacks on state security forces and Coalition troops. Because too much pressure on the militias might ignite them, such a policy would have to slowly work towards stifling militia money-making. Raiding and shutting down the “economic offices” run by the PMUs across the country for profiteering operations may provoke a violent conflagration, which is the last thing Iraq needs. However, Kadhimi can exert his control over his public sector, specifically on the links and contacts through whom the pro-Iranian militias have been able to gain an economic foothold. Rotating local administrative officials regularly and increasing the pay of such officials will reduce their inclination to collaborate with militias. At the same time, measures to increase financial accountability and reporting, as well as oversight of regional economies will go some way in formalizing the informal economy and preventing the vulnerability of officials to corruption.

Realistically, nothing too drastic can be achieved by Kadhimi in the economic area. The best he can hope for is to eat away at the militias’ economic base gradually by the time of the next elections, in the hope that parties affiliated with pro-Iran militias suffer in the voting booth. If that happens, Iraq’s next prime minister will be able to pass the large-scale economic reforms needed to put the country on a longer-term path of economic growth, which can be a means of attracting militiamen into formal private sector employment. Nevertheless, for now, political coalition-building alone may not be enough to prevent renewed attacks on U.S. and other foreign troops when the militias’ patience for an ongoing ceasefire runs out. A policy that considers the overlap of political exploitation with economic corruption will chip away at the economic stronghold of the militias and diminish their ability to procure arms, bribe officials, and conduct violent operations.

Tom Webster is a Junior Analyst at Le Beck International who has conducted extensive research on the Popular Mobilization Units and their place in Iraqi state-building.