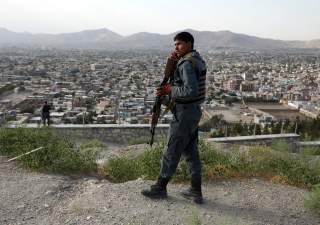 President Donald Trump wants out of Afghanistan by 2020. He may get his wish. Zalmay Khalilzad, the U.S. Special Representative to Afghanistan, has been negotiating with the Taliban for a nearly a year and is hopeful that the next round of talks will produce a “lasting and honorable” peace agreement.

While peace would be wonderful, the United States should not be too hasty in reaching a deal. Two of the Trump administration’s top counterterrorism priorities—defeating ISIS and preventing Afghanistan from once more becoming a hub of global terror—are sometimes viewed as separate objectives. In fact, they are part of the same fight—and that fight is complicated.

For starters, Al Qaeda and the Taliban aren’t the only extremist groups operating in Afghanistan. More than twenty foreign terrorist organizations or organizations that have provided support to terrorists are active there. One of the worst is the Islamic State-Khorasan (ISIS-K), which is an Afghan affiliate of the Islamic State.

When the organization was formed in January 2015, Abu Bakr al-Baghdadi hand-picked Hafiz Saeed Khan to lead it. Khan was joined by Abdul Rauf, a former Guantanamo Bay detainee and member of the Taliban, who defected to al-Baghdadi’s cause.

This leadership team did not last long. Both Rauf and Khan were killed in drone strikes; Rauf died in February 2015 and Khan died in July 2016. Yet the group was able to expand nonetheless. According to the United Nations, ISIS-K has the largest foreign fighter component of all the ISIS affiliates. Its troops, drawn from North Africa and Europe, the North Caucasus and South and Central Asia, now number between 2,500 and 5,000.

ISIS-K’s targets have included NATO personnel, Shia worshippers, and the Taliban. According to the Special Inspector General for Afghanistan Reconstruction, the group is responsible for one fifth of all civilian casualties in Afghanistan.

ISIS-K largely operates in eastern Afghanistan, primarily in the Nangarhar and Kunar provinces, which are close to the border of Pakistan. Yet it also reportedly has a presence in neighboring provinces of Nuristan and Laghman, as well as the capital city of Kabul, where it has launched attacks.

Now, there are fears ISIS-K has broadened its ambitions. It has claimed attacks in neighboring Pakistan, and Marine Gen. Frank McKenzie, the head of U.S. Central Command, recently stated that ISIS-K “has aspirations to attack the United States.” A U.S. intelligence official based in Afghanistan characterized this summer’s attacks in Kabul as “practice runs” for operations in the United States and Europe, which this official described as “just a matter of time.” He also called ISIS-K “the most near-term threat to our homelands from Afghanistan.”

That threat may have already turned to action in Europe. In April 2017, an Uzbek called Rakhmat Akilov began mowing down civilians on the streets of Stockholm, Sweden. Akilov said he carried out his attack in order to “build a caliphate according to Prophet Muhammad's prophecies.”

Prior to his attack, Akliov was in contact with a fellow Tajik called Abu Osama Noraki. Akilov identified Noraki as an ISIS emir. Noraki is suspected of recruiting Tajiks to the cause via the smartphone walkie-talkie app Zello.

True, it has not all been smooth sailing for ISIS-K. A UN assessment this July concluded that, “in 2019, ISIL-K suffered military setbacks and the intensity of its attacks lessened compared with previous periods.” ISIS was also weakened by a military skirmish with the Taliban in the summer of 2018 in the province of Jowzjan in the country’s north. This was erroneously claimed by the Pentagon to be a victory for Afghan security forces.

The good guys, too, have recorded some victories over ISIS-K. According to the Long War Journal, the United States has successfully targeted four ISIS-K emirs since July 2016. The latest was Abu Saad Orakzai, who was killed during an August 2018 airstrike in the Nangarhar Province.

Despite this, ISIS-K presents an ongoing regional and, potentially, transnational threat. As it has grown in manpower (from hundreds at its founding to thousands today), it has expanded the territory it controls in Kunar. It operates in rugged, highly advantageous terrain and is aggressively recruiting from university campuses.

Perhaps, once the United States withdraws, the Taliban will crush ISIS-K as part of a campaign to expand its influence in Afghanistan even further. When speaking as head of U.S. Central Command, Army Gen. Joseph L. Votel noted that “ISIS-K is not a popular insurgency in Afghanistan. Everybody is against them.” Perhaps its presence in Afghanistan will prove to be fleeting.

Yet several observers have pointed out that if the United States does negotiate a durable peace settlement in Afghanistan, then it is possible that some of the most hardcore Taliban elements that want to carry on fighting may be drawn to the transnational jihadism of ISIS-K.

Either way, any deal negotiated in Afghanistan must allow the United States to retain the ability to carry out counterterrorism operations there. After almost two decades of fighting, America’s desire to wind down its efforts is understandable. Yet, as it does so, it cannot ignore the emergence of a group that aspires to inflict the kind of suffering on the United States that led it into Afghanistan in the first place.