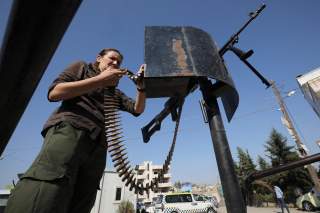 In January 2014, during my first visit to northeastern Syria, I watched as more than a dozen local leaders—men and women; Christians, Muslims, and Yezidis; Kurds and Arabs—met in a conference hall in Amuda, Syria, to affirm a provisional constitution for Rojava, an autonomous region formed against the backdrop of the Syrian civil war. At the time, the People’s Protection Units (YPG) and Women’s Protection Units (YPJ) had already successfully driven out the Al Qaeda-affiliated Nusra Front. That was the first battle, however, in what would become with the rise of the Islamic State, a much wider war.

Out of deference to the region’s diversity, leaders renamed their government as the Autonomous Administration of North and East Syria, and the Syrian Defense Force (SDF) became its umbrella army. Whereas the United States initially hesitated to work with the Syrian Kurdish administration and forces out of deference to Turkey, the U.S. government decided to partner with the SDF and the local administration for two reasons: The first was the growing weight of evidence showing that Recep Tayyip Erdoğan’s was complicit with the Islamic State, and the second was the sheer fighting prowess of the Syrian Kurds as demonstrated in Kobane and elsewhere. Partnership with the SDF enabled the United States to amplify exponentially the impact of an investment of just a few hundred troops.

I returned this past summer. The success, development, and general calm of the region was apparent. I walked around Amuda without security, visiting an amusement park one evening on a whim and a roadside restaurant another. A cemetery outside Kobane was testament to the sacrifice made there, but in the center of that city, school girls walked in small gossiping gaggles, and women shopped while leaving infants sleeping in strollers outside shops. Even Raqqa, the one-time capital of the Islamic State, was being rebuilt, its central square where the Islamic State once displayed the heads of crucified victims renovated into a symbol of urban rebirth. In most cities where the Kurds supervised security and administration, it was possible to forget North and East Syria was actually inside of Syria.

Turkey’s government, however, was fiercely opposed to any Kurdish safe-haven. Even as Turkish President Recep Tayyip Erdoğan spoke about revising the Lausanne Treaty to enable Turkish land grabs in Syria, Trump Special Envoy Jim Jeffrey, a former ambassador to Turkey with a track-record of acquiescing to Turkish demands, gave credence to Turkey’s insistence for a buffer zone that would incorporate most of North and East Syria’s major Kurdish population centers. That proposal—basically an invitation to ethnic cleansing—went nowhere until Erdoğan telephoned Trump in October 2019. Much of the instability in that portion of Syria can be traced to what happened next: With no advance notice either to U.S. allies or U.S. forces operating in Syria, Trump announced a withdrawal and effectively greenlighted a Turkish invasion. The rest is well-known: America’s Kurdish allies—both the SDF and tens of thousands of civilians fearful of the Turkish onslaught and ethnic-cleansing campaign—fled their homes. An administration that once focused on rebuilding their systems to provide for their people, suddenly had to witness almost everything they had worked for destroyed by Turkish troops and their proxies, many of whom executed prisoners, freed Islamic State prisoners and openly incorporated former Islamic State veterans.

The Autonomous Administration of North and East Syria still persists, the preferred administration of many of the region’s population who fear Turkey, the Syrian regime, and Russian forces who moved in as the Americans pulled back. They are caught between a rock and a hard place as the Turkish invasion and theft of many of their resources have undercut their ability to provide services at a time when they are most needed.

With coronavirus spreading across the globe, I had the opportunity to talk on March 18, 2020 with Ciwan Mistefa, co-president of the health department of the Autonomous Administration of North and East Syria. Mistefa described an active fight against coronavirus in an area it seems much of the world has now forgotten. The Kurdish Red Crescent and the self-administration’s health department are working informally with the World Health Organization (WHO) to organize “a coordination group with all stakeholders and other NGOs in the North East of Syria, in order to prevent the spread of coronavirus.” While WHO might understand the stakes, politics intercedes as Mistefa says the UN-body “is not working with us formally as they work from Damascus.”

Regardless, Mistefa said the Autonomous Administration of North and East Syria and the health department have closed their borders (that is, in practice Iraqi Kurdistan as Turkey blockades the region) with the exception of emergency cases and “twice weekly transportation of commercial basic need.” There are exceptions for medicine and medical supplies to pass at other times, in coordination with local authorities. In all cases, there are temperature checks for anyone crossing the border or entering an internally-displaced persons camp.

The North and East Syria authorities have also closed both schools and universities and forbidden all public gatherings. This is significant as Newroz, the Kurdish (and Persian) New Year is perhaps the biggest celebration in the region. In addition, all sporting and social events are also cancelled. The Kurdish Red Crescent is also monitoring the regulation of the waste management process in cooperation with the Autonomous Administration. There are still on-going discussions about how best to prepare and dispose of dead bodies.

Mistefa report that the Autonomous Administration has also launched an awareness campaign which seeks to conform to WHO standards. “A poster with all basic hygiene information was already distributed everywhere and will continue to be distributed, for example, in each bakery and at each checkpoint in North and East Syria,” he said. In addition, the health department “will share an audio message and video with all instructions on local radio and television channels.” The administration has also launched an education campaign for use in the internally-displaced persons camps.

Combatting Disease Against the Backdrop of Syrian Civil War

Not all is well, though. Neither the Kurdistan Red Crescent nor the Autonomous Administration “have not enough instruments and tools to deal with a pandemic,” he said, although the NGOs who remain in the region are seeking to help. The region will dedicate 13 ambulances to the transportation of those infected with COVID-19, three of which will be committed to those in need of intensive care.

Testing is a nightmare. “So far the only laboratory which can diagnose COVID-19 is in Damascus, under the control of the Syrian Government. To screen a suspicious case, WHO will take a sample and will transport it to a laboratory in Damascus,” Mistefa said. In practice, it will take a week and even then, “results are not 100 percent sure, given the distance and the impossibility to check quality of the procedures.”

Isolation is also difficult, although the Autonomous Administration is now creating nine isolation wards. They expect five centers to be ready in 20 days, although it is not yet clear ventilators will be available. While the Kurdistan Red Crescent has some Personal Protective Equipment, and WHO has promised more, it is unclear when these will arrive.

The other major problem has been the ramifications of the Turkish invasion. The Turks pushed more than 300,000 people from Ras al-Ayn (Serê Kaniyê) and Tell Abyad (Girê Spî) southward at a time when the Autonomous Administration was already straining to deal with 100,000 refugees and internally-displaced persons. According to Mistefa, “If one case was confirmed in any center of those, it is a really disaster in such condition.” The Al-Hol camp, where many Islamic State detainees and family members remain confined, presents another problem, especially given the lack of resources and the disinterest of those in the United States, Europe, and elsewhere to repatriate their citizens who had joined the Islamic State. “Honestly, if one case was confirmed in Al-Hol it is totally a disaster and we can only put total isolation on the camp,” he said.

The Turkish invasion is complicating response in other ways. “The access to the areas in North and East Syria have become very difficult and it is not easy to access and intervene in emergency cases because the main road which was connecting east and west of North and East Syria…is now closed and it is too much difficult to send supplies and respond in a timely and needed way.”

In 2003, as severe acute respiratory syndrome (SARS) erupted in China and spread across Asia, Beijing prioritized its political animosity toward Taiwan over global health and undercut the World Health Organization’s response. Today, the animosity of Erdoğan and Syrian President Bashar al-Assad, and the indifference of Donald Trump toward the Syrian Kurds does much the same thing. Pandemics know no borders, but failing to enable Syrian Kurds to fight the disease not only continues their betrayal at the hands of outside powers, but also threatens the global fight against COVID-19.