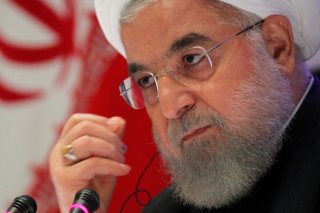 U.S. Secretary of State Mike Pompeo has served a thirty-day notice to the international community for the reimposition of United Nations sanctions on Iran. The effort is opposed by thirteen out of the fifteen members of the UN Security Council (the exceptions being America and the Dominican Republic), the other signatories to the Iran Deal (Britain, France, China, Russia, and the European Union) and by all accounts most countries across the globe. Yet Pompeo is bent on proceeding with the move, even as his former colleague and fellow ardent anti-Iran hawk John Bolton has warned it will weaken the U.S. internationally.

The U.S. is expected to unilaterally declare the reimposition of six past UN Security Council resolutions sanctioning Iran on September 20th. Tehran has been noticeably silent about what it might do in response. While most signs indicate Iranian decisionmakers will wait for the results of the U.S. election before reaching a firm decision, this is not for certain.

A variety of factors will impact Iran’s response, and there is currently an active debate within the country on what to do when the U.S. declares the “snapback” of UN sanctions. Much will depend on the degree to which the U.S. seeks to enforce the “UN” sanctions that only it and a handful of other countries will recognize. If the U.S. begins more aggressive actions such as harassing Iranian ships, or the political camp in Tehran that believes a Biden administration would be no different than Trump gains the upper hand, Iran may counter-escalate sooner rather than later.

The Scene in Tehran on Snapback

The split in Tehran on how to respond to snapback is largely between President Hassan Rouhani and those affiliated with his administration and their political opponents. Rouhani has fought intensely in the domestic arena to keep the Joint Comprehensive Plan of Action (JCPOA) alive, even if on life support, and maintain the potential for its resuscitation. He supported Iran reducing compliance with the deal, based on a clause in the deal that affirms that if one party ceases its obligations, the other party is permitted to concomitantly reduce its compliance. But Rouhani has repeatedly emphasized that if the United States and other parties return to their commitments under the deal, Iran would too.

However, potential UN sanctions snapback will pose a serious challenge to the fragile consensus Rouhani has kept in Tehran on preserving the JCPOA. Rouhani was outspoken in warning about the consequences of the U.S. seeking to extend a conventional UN arms embargo on Iran, due to expire in October as per the JCPOA. He has since lauded as “spectacular” the humiliating defeat of the U.S. resolution on extending the embargo at the UN Security Council.

However, Rouhani and his aides have been relatively silent on what actions his administration will take in response to the U.S. effort to now force the reimpostion of all UN sanctions, including the arms embargo.

In contrast, Rouhani’s conservative rivals in parliament have been unequivocal about what they would like to see. The parliament’s foreign policy and national security commission, headed by anti-JCPOA hardliner Mojtaba Zonnour, released a statement calling for the country’s nuclear program to be returned to its pre-JCPOA state if UN sanctions snapback occurs. The statement called for boosting the country’s uranium enrichment capabilities, proclaiming: “If the dispute resolution mechanism [snapback] is illegally activated, the Atomic Energy Organization must quickly return all nuclear activities to their pre-2015 level and utilize more advanced IR-4, IR-6, and IR-8 centrifuges to quickly meet the country’s need for 190,000 SWU [enrichment capacity]. It must also start constructing nuclear propellants to equip our country’s navy with.”

Analysts close to the Islamic Revolutionary Guards Corps (IRGC) have made similar calls. Some say Iran should reduce its level of cooperation with the International Atomic Energy Agency (IAEA), including by ending implementation of the additional protocol to its IAEA safeguards agreement, which gives inspectors broad access. While analysts close to Rouhani are more circumspect, there is general agreement that the United States will unilaterally seek to declare and enforce UN sanctions on September 20, despite the strong opposition of the other UN Security Council states.

Yousef Molaei, an analyst close to pro-JCPOA forces in Tehran, says: “The issue [of snapback] is no longer a legal one but has become a matter of political force. America cannot activate snapback legally, but by relying on political force and its diplomatic instruments, can ultimately reimpose international sanctions against Iran.”

However, unlike some of their conservative counterparts, those close to the Rouhani camp in Tehran are arguing for a more cautious response to snapback. Their priority is keeping the JCPOA alive and preventing international consensus forming against Iran. They believe that if Iran abandons the JCPOA or reduces cooperation with the IAEA, it will lose European support and likely the sympathy of Russia and China as well.

The aim of the moderate faction in Tehran is to wait until the U.S. election before reacting to snapback. Democratic presidential candidate Joe Biden has said he would return to the JCPOA on multiple occasions, including in a recent CNN op-ed. However, the path Iran will take will ultimately depend on what happens on September 20 and how other UN members react to snapbacks.

The reformist Fararu outlet has said that if other countries hold their ground and reject America’s declaration that UN sanctions have been reapplied, Iran will continue a policy of restraint. However, Fararu states: “If countries, whether willingly or reluctantly, implement UN sanctions, Iran may need to make a decisive response.”

The concern is that the United States will radically ratchet up actions against Iran based on the excuse of enforcing UN sanctions. This could include interdicting Iranian ships, ending sanctions waivers for countries like Iraq that continue trade with Iran, and extraterritorial sanctions against nations that defy the United States on Iran. The recent appointment of Elliott Abrams, a vociferous anti-Iran ideologue who has a track record of supporting military intervention in the Middle East, as the State Department’s new Iran envoy, gives credence that this scenario will unfold leading up to the U.S. election.

Still, analysts close to the IRGC reject the notion of Iran waiting until the U.S. election to respond to the U.S. snapback declaration. Mostafa Khoshcheshm has argued in the IRGC-affiliated Fars News that a Biden administration would not be markedly different from Trump for Iran. He says Biden may in fact be more challenging because he will be able to reduce current U.S. tensions with the international community and more easily create global consensus against Iran. He also expresses concern that Biden will break “domestic unity” in Iran against new negotiations with the United States.

The Inherent Risk of Snapback

Pompeo and other Iran hawks in the Trump administration are likely hoping that Iran counter-escalates in dramatic fashion to snapback. They will have successfully achieved their aim of killing the JCPOA and will be able to redouble their efforts to elicit far greater concessions from Iran, including that Iran agree to end uranium enrichment, give up its missiles, and dismantle its regional alliance network.

However, while the JCPOA was an off-ramp to conflict, the Trump administration is returning the Iran issue into a binary choice: either Iran gives into maximalist demands or faces military action. As the debate over snapback in Iran shows, there is an appetite in Iran to increase its means of leverage and deterrence and push back the United States. The results of the U.S. election and the next seven weeks leading up to it will be critical.