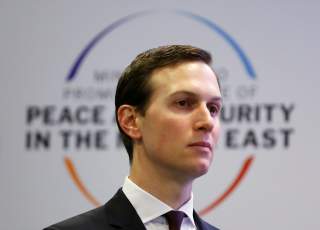 The political process, which began in Madrid and continued in Oslo has been stalled since 2001. Meanwhile, the conflict has intensified, positions have hardened, and the possibility of an agreement remains elusive. More of the same will not produce different results.

So, Kushner decided to start with economics, not politics. He seeks to improve the economic lives of the people of the region, not just among Palestinians, but also young Jordanians and Egyptians. People need hope and progress before debating where to draw border lines. No one has tried this promising approach before.

Kushner’s Bahrain conference got far less attention in Western media than it deserved. While some noted the absence of Palestinian Authority officials and some missing Arab government representatives, almost none noticed that Kushner won real funding commitments to build infrastructure and fund local reforms to speed job creation and jump start Arab economies.

This has the benefit of transforming Middle East peace’s biggest stumbling block—a growing, restive army of unemployed youth—into a driver of cooperation. Prosperity thins the number of protestors while promoting peace.

Right now, the United States is consumed with impeachment and the Arab world with Iran. Yet, deep-rooted trends, revealed in the recent elections in Israel, show that Arabs and Jews are now seeking reconciliation for the first time in decades.

From a balance-sheet perspective, Israel’s Benjamin Netanyahu should have won the recent election easily. Under his government, the United States and other nations moved their embassies to Jerusalem, legally recognized the annexation of the Golan Heights and the extension of the West Bank settlements. These items have been on the Israeli wishlist for decades. At the same time, the Israeli economy is booming. Tel Aviv is home to more than twenty “unicorns,” start-ups valued at more than $1 billion, and its tech sector has more jobs open than candidates available. All the lights are green. And yet Israeli youth voted massively against him. Why? The Netanyahu style is considered too aggressive, according to exit polls. Young Israelis say they want peaceful relations with Palestinians and neighboring Arabs and doubt Netanyahu can deliver.

The Israeli Arabs are sending a similar message. The unified Arab list came in third with thirteen seats. (By contrast, Avigdor Lieberman’s party won only eight and presents itself as the maker of kings.) Arabs make up about 20 percent of the Israeli population but, historically, their participation in national elections has lagged far behind that of Jews. This month’s national election was a break from that trend. Some 61 percent of eligible Arabs voted, up 12 percentage points from the previous election. By voting in large numbers, they are saying that they want to integrate, but not as second-class citizens.

Put together, the votes of younger Jews and Arabs merge into a constituency for peace. Kushner’s plan takes account this new strategic situation and provides both sides with something new and valuable.

To believe that the current domestic upheaval diminishes U.S. influence, and therefore the viability of the Kushner plan, is a mistake. As a friend of the United States, I think that the current crisis in Washington actually reinforces the brand of America; that it is a country where institutions work, countervailing powers duel under law, and rivals stay within the constitutional channels. More than military might, the image of a law-abiding democracy is more impressive. It that gives the United States a leading role in world affairs.

Therefore, America remains the only power that can secure a peace plan between Israelis and Palestinians. Its leaders should not be too distracted by domestic issues to seize a rare possibility for peace presented by Israeli elections.

Kushner’s plan deserves to be tested and evaluated now, while Israel’s Arabs and Jews are open to listening. To do this, it must first succeed in the first stage of its plan, economic empowerment. New roads, port facilities, schools, hospitals and factories, backed by private investors and multinational aid agencies. The lives of ordinary Israelis of differing faiths will be slowly knit together through work and trade. Eventually, this will form the foundation for political compromise and, from that, peace.