Trouble in Tripoli: Why Europe Must Respond to the Ambitions of Libyan Warlord Khalifa Haftar 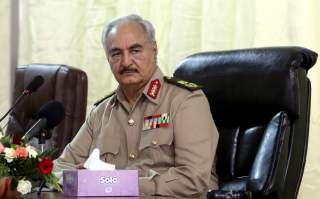 Every time there is a European conference on Libya, the dominant feeling is the same: the Europeans seem to be more interested in the process—the mere act of bringing stakeholders together to talk—than the outcome. It is less clear whether this talk is actually conducive to any solution that can stop the spiral of violence in Libya.

Perhaps the prioritization of process over results stems from the highly mediatized nature of contemporary politics. It could be that European politicians, being primarily electoral animals obsessed with their own survival, think that an international photo opportunity or merely displaying action is always worth the effort, regardless of the outcomes.

Possibly, this dynamic could also be due to the widespread presence of a highly bureaucratic culture in Europe—especially pervasive in Brussels-based institutions—in which procedures are the raison d'être. As such, organizing the conference was the aim rather than a tool to achieve something else.

Looking at it from this perspective, the recent Berlin conference did not differ from other European-led meetings in recent years, such as those organized in Paris or Palermo. However, there was one major difference: in this conference, the meeting between the two sides of the conflict—the president of the UN-backed Government of the National Accord (GNA) Fayez al-Serraj and the eastern Libyan warlord Khalifa Haftar—did not even occur. No widely publicized hugs as in Palermo. No handshake with the blessing of Macron as in Paris.

Before April 4, there may have been a chance to produce a managed, and more inclusive, process. After the military attack on that date, with which Haftar launched his bid to control the entire country, this logic of mediation at any cost became obsolete and the polarization between the two sides exacerbated.

Observers need a lot of imagination to consider Berlin a real step forward, at least if the aim is to achieve a stabilization that is not short-sighted and structurally weak. A truce is always good since whatever can be done to avoid further chaos and destruction in today’s Libya should be welcomed. Yet, as shown by the immediate resumption of hostilities in the aftermath of the conference, any truce without clear and consistent mechanisms to punish free-riders and spoilers is destined to fail. The events of the past few days—with the flights of Emirati planes to Libya, the attacks by Haftar’s forces, and the Turkish responses—show how this sad reality did not take too long to materialize again.

Berlin can only be considered a step forward if one looks at it from the point of view of Haftar and his supporters: Berlin was the final step in his journey toward full international recognition. Moreover, the idea of appointing a “new, representative and unified government” as envisaged by the conclusions of the conference will give Haftar a de facto veto on any political solution. Haftar will reject any arrangement that includes current members of the GNA. As such, any new government of national unity that emanates from these negotiations will be even less representative than today’s GNA.

Finally, there is a problem which has remained off the table in Berlin: Haftar has shown with his actions and words that his aim is to achieve full victory and continue his military operations in the West until this goal is fulfilled. He has the ambition of controlling all of Libya, and he will not stop anywhere short of this goal. He perceives a power-sharing agreement as to the ultimate stage of a political process and primarily as an intermediate step for him to gain absolute control of the Libyan state and its resources. If he is allowed to do so politically, and quickly, then all the better for him; if not, then he will continue his military operations for at least as long as his external supporters provide him with military assistance, especially airpower.

Given this situation, the United States and European countries face a troubling dilemma: they could continue to ignore the reality of Haftar’s violence and ambition, the corruption of his inner circle, and the blatant human-rights violations by his militias (especially the hard-core Salafists) and continue supporting him, or they could enter decisively on the side of the Tripoli’s GNA. The last option can only be viable and effective if the Western countries are ready to adopt a much tougher approach, one that includes the enforcement of a no-fly zone over at least the western part of Libya and is not limited to vague statements of principles.

The only other solution is for the international community, led by the United States, to find a way to pressure Haftar’s external supporters to cease their support for his violent behavior and force him to withdraw his forces and accept the terms of a negotiated solution to the war.

Dr. Karim Mezran is the director of the North Africa Initiative at the Atlantic Council.