The True Impact of the Israeli Elections 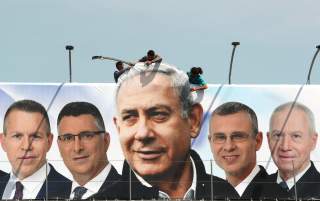 The upcoming Israeli parliamentary elections on April 9 may be consequential for more than just Jerusalem, as the election has become a referendum on the country’s four-time elected prime minister, Benjamin Netanyahu. Serving as the Israeli prime minister since 2009, Netanyahu, who also held the position from 1996–1999, has presided over great changes in Israeli politics, as well as dealing with regional upheaval brought on by the Arab Spring and the intensifying Saudi Arabian-Iranian rivalry.

Despite managing to navigate this turmoil, Netanyahu is facing uncertain electoral prospects. Israeli Attorney General Avichai Mandelblit’s recent decision to indict Netanyahu on charges of fraud, bribery, and breach of trust has thrown Israeli politics into chaos, and the decision by Benny Gantz, the former chief of staff of the Israeli Defense Forces and leader of the centrist Blue and White party, to run as an alternative to Netanyahu has, in the words of Haaretz editor Aluf Benn, “electrified the defeated center-left.” According to Benn, Gantz’s entrance into the race has helped galvanize smaller Israeli political parties into banding together against Netanyahu.

Gantz’s ascension may be both a blessing and a curse for the Israeli opposition. Israel’s Knesset, or parliament, utilizes a multiparty system where Israeli citizens vote for the parties they support, rather than individual candidates, and the parties which receive more than 3.25 percent of votes (about four seats) receive official representation. To have a chance at running the Israeli government, the elected parties must then unify into coalitions; the one that acquires a majority of the Knesset’s 120 parliamentarians becomes the governing coalition and the prime minister is selected from within that coalition by the Israeli president.

Unfortunately, Israeli politics are not always so straightforward. At an event at the Center for the National Interest on March 18, Shai Feldman, director of Brandeis University’s Crown Center for Middle East Studies, raised two serious concerns about the Israeli opposition’s chances of ousting Netanyahu in the upcoming election. First, Feldman cautioned that even if a right-wing coalition under Netanyahu’s Likud party is not victorious at the polls, a center-left electoral victory may only translate into a veto over the government’s policies, rather than a governing coalition and control over the prime minister’s office. This, Feldman says, is because of Gantz and the Blue and White party’s intention to only govern alongside “Jewish and Zionist” parties—effectively freezing out the Arab and anti-Zionist opposition parties whose votes Gantz would need to become prime minister.

Second, even if an Israeli center-left bloc can form a governing coalition, Feldman questioned what is binding them together in the first place: “It’s far from clear what this election is about . . . the only thing that unifies them [the Israeli opposition] is opposition to Netanyahu . . . personally.” Feldman’s assertion that Netanyahu is “the only glue” holding the opposition together portends trouble for any Israeli anti-Netanyahu coalition; for whether Netanyahu’s reelection bid fails on April 9 or whether he is removed from office due to his legal troubles, the Israeli opposition may fracture with the loss of its common boogeyman.

Netanyahu’s fate will also have repercussions for the United States. President Donald Trump’s close relationship with Netanyahu has led the White House to develop its Middle East policies with a friendly and politically useful Jerusalem in mind, and his ouster would be a blow to the Trump administration’s regional priorities such as restarting the Israeli-Palestinian peace process. The Palestinian issue has become increasingly fraught in Israel in recent years, where a political impasse has led to Israeli settlements expanding into the West Bank, an unsustainable blockade of the Gaza Strip, and outbreaks of violence in both territories. Public polling in Israel reveals how complex the situation has become: 71 percent of Israeli Jews believe that Israeli control over the Palestinians is “immoral” and another 78 percent think Israeli dominion over the West Bank is “not good for Israel.” Yet, at the same time, 66 percent see that there is “no alternative at present,” which Feldman contended was from a lack of a united Palestinian leadership that can serve as a credible negotiator.

Feldman could only offer a somber analysis on the prospects of the White House’s impending proposal to resolve the Palestine issue, observing that any overture would be “dead on arrival” unless the administration reversed course and offered something of significance to the Palestinians. Judging by the administration’s recent recognition the Golan Heights as Israeli territory—following previous decisions to recognize Jerusalem as Israel’s capital and to cut off U.S. aid to Palestinians in the West Bank—it seems likely that the White House’s one-sided unilateralism is here to stay, justifying Feldman’s concern that the long-touted peace plan may “disappear in ten seconds” upon release.

Although it is likely that whichever Israeli government is elected next week will pursue a close and amicable relationship with Washington, it is less clear that Jerusalem will continue to carry water for Donald Trump. The Trump-Netanyahu relationship has been politically beneficial for both leaders, with Trump’s pro-Israel policy decisions producing windfalls among Netanyahu’s political base and Trump’s evangelical supporters alike. Yet while the consequences of these policies are not currently being felt in Washington, such an arrangement cannot last. Pushed into desperation, Palestine is certain to erupt against this unsustainable status quo. This ensures that whether or not Netanyahu is ousted next week, Israeli and American politics are certain to reap the whirlwind of his reign.