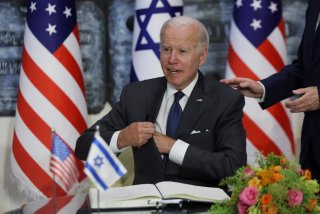 Vladimir Putin’s decision to invade Ukraine has not only changed the security landscape in Europe, it has also fundamentally altered the way the Biden administration views geopolitical realities internationally. Without Putin’s invasion, it is doubtful that the president would have made a trip to Saudi Arabia and met with the crown prince. This trip was about more than near-term oil production. It reflected a deeper recognition that the Middle East, and key states in it, are important in the longer-term competition with the Russians and Chinese. It also reflected Washington’s understanding that many leaders within the region had grave doubts about America’s staying power, and thus, there was an acute need to re-establish the credibility of our commitment to securing our interests and friends in the area. Given where the Obama and Trump administrations were on the high cost of deepening engagement in the Middle East, it is no exaggeration to say that the trip represents a transformation of Washington’s approach to the region. No longer are we talking about a pivot away from it.

Looking Back to Move Forward

To understand this transformation, a glance back may be helpful. Historically, even as the United States made clear it would directly protect our interests in the Middle East, we have long tried to do so by fostering a regional collective security system. The Truman administration created the Middle East Defense Organization which remained mainly on paper. Whereas President Harry Truman was more riveted on Europe and then Asia with the Korean War, President Dwight Eisenhower saw the Middle East as the main arena of competition with the Soviet Union. He wanted to create an alliance system there that would keep the Soviets out and away from any leverage on its oil—the lifeblood of the Western economies. His solution, the regional Baghdad Pact, would largely fail—in no small part because Arab states saw the Soviets as our enemy, not theirs. Later, at the outset of the Reagan administration, then-Secretary of State Alexander Haig saw an opportunity to foster a strategic realignment. He argued that there was “in a real not theoretical sense, a strategic consensus” built around common Egyptian, Saudi, Jordanian, and Israeli fears of terror, Islamic fundamentalism, and the Soviet Union. He may have thought that the Egyptian-Israeli peace treaty and the revolution in Iran created the basis for this new realignment. But Iraq and Syria, competing for leadership in the Arab world and each vying to be the leading confrontational state vis-à-vis Israel, precluded even a tacit movement toward the collective security posture that Haig envisioned.

In fact, every effort the United States has made to forge a regional collective security system in the Middle East generally analogous to those it put together after World War II in Europe and Asia has failed. Unlike in other regions, the United States in the Middle East had to contend with a complicated set of circumstances, including greater internal instability and competition, various regional actors’ aggressive behavior, to include terrorism and weapons of mass destruction (WMD), and the historical inability of Arab states to align with Israel given the latter’s conflict with the Palestinians.

Still, notwithstanding our failed efforts to forge an alliance system, the U.S. commitment to the region, even with fewer forces in it than elsewhere, had many successes. It flipped Egypt out of the Soviet orbit; pushed back threats to peace including the Soviet intervention in Afghanistan, Iran’s attacks on Iraq and the Gulf, and Iraq’s Kuwait invasion. It promoted an active peace process between Israel and its neighbors, which also helped build acceptance of Israel in much of the Arab world. In other words, despite setbacks—and the persistence of dysfunctional regional social, economic, and political phenomena—the United States largely accomplished its strategic mission, often with regional and European support, at least until 2001. Indeed, although America may not have been able to fashion a formal collective security alliance, few doubted our resolve to protect our interests and partners in the region.

But from 2001 forward, U.S. policy took two radical turns: first, under President George W. Bush following 9/11 and later President Barack Obama during the Arab Spring, Washington launched major military-diplomatic efforts to eliminate those dysfunctional phenomena. These efforts largely failed, with Iraq proving to be a hugely costly stalemate in which Iran proved to be the biggest winner. Second, and largely in reaction to Iraq, President Obama, and then President Donald Trump, promulgated a “pivot” out of the region, citing both the growing China challenge and the American public’s frustration with over-engagement. Nevertheless, within the region, significant American military forces remained, U.S. military-diplomatic ties to America’s many partners continued, and both administrations selectively tackled specific security problems.

For Obama, those included Afghanistan, a nuclear agreement with Iran, and war on the Islamic State (ISIS). In all, the administration relied on international coalitions including European and (except the nuclear talks) regional partners. Trump had his own particular policies, moving away from Afghanistan and the Joint Comprehensive Plan of Action (JCPOA) nuclear agreement but winning the conflict with ISIS and contesting Iran’s regional advances. His efforts were also backed by broad coalitions, the informal eighty-member “Defeat-ISIS” alliance and an ever more formal partnership against Iran with Israel and Arab states, culminating in 2020 with the Abraham Accords. But despite specific successes, neither Obama nor Trump convinced regional leaders that the United States remained the fully reliable security partner they had known from the support for Israel in the 1973 war through the liberation of Kuwait in 1991 to the dual containment of Iraq and Iran until 2001.

The Biden administration initially continued the pivot from the region, with its 2021 Interim National Security Policy placing an explicit priority on countering China and secondarily Russia, with little commentary on the Middle East. While the administration maintained the effort against ISIS remnants, it culminated in Trump’s Afghan withdrawal, initially reacted coolly to the Abraham Accords, and dialed back the regional effort against Iran, while attempting a return to the JCPOA. Meanwhile, the U.S. military took an apparently different tack, maintaining a relatively high level of forces in the region despite a global review, and noting in the 2022 Posture Statement of its Middle East command “the greatest … single threat to regional security and stability remains Iran.” Faced with this confusion, regional partners remained skeptical about Washington’s intentions.

From the outset of his presidency, President Joe Biden has spoken of the historical challenge now facing democracies in the struggle with autocracies. Framed that way, with Israel being the only democracy in the region, it is also not surprising that the Middle East was not a priority for his administration. It took five weeks for Biden to have his first call with a Middle Eastern leader, Israel’s prime minister, long after he had been phoning his other counterparts around the world. His comments about Saudi Arabia and its crown prince further reflected his readiness to de-prioritize the area.

But Biden is also a pragmatist, quick to understand when something fundamental is at stake. Putin’s assault on a rules-based international order and China’s support for him changed the geopolitical realities. Biden understood that the Saudis, Emiratis, and others may not be democracies but they are also not revisionist states—states trying to upend the international and regional orders. Moreover, both to limit Russia’s ability to finance its war of attrition with Ukraine and to highlight visibly the cost of aggression, the Biden administration had to reduce Russia’s ability to sell its oil—which meant it had to replace as much of it as it could on the global market. So Saudi importance on oil was clear, but, in truth, not just for the near term but also over time if the transition away from fossil fuels over the next two decades is to be managed without wild swings in oil prices.

When one looks at Biden’s focus first in Israel and then in Saudi Arabia, it is clear from his statements that in the first instance he set out to reassure our partners. In both countries, there were reaffirmations of U.S. commitments to their security—with our helping to maintain and strengthen Israel’s qualitative military edge to ensure that Israel could do what has always been a crucible for it: “defend itself by itself against any threat or combination of threats.” With the Saudis, Biden strongly affirmed our “commitment to supporting Saudi Arabia’s security and territorial defense, and facilitating the Kingdom’s ability to obtain necessary capabilities to defend its people and territory against external threats.” (This formulation seemed designed to let the Saudis know that even if there were political difficulties in our providing U.S. weapons to the Kingdom, the administration would find a way to ensure the Saudis received what they needed.)

The reassurance was not only on security in a general sense but specifically against the threat both the Israelis and Saudis see as most dangerous: Iran. With Israel, in the joint declaration the Biden administration committed to using “all elements of its national power” to prevent Iran from getting a nuclear weapon. With the Saudis in the joint communique, the administration addressed the need to do more to deter “Iran’s interference in the internal affairs of other countries, its support for terrorism through its armed proxies, and its efforts to de-stabilize the security and stability of the region.”