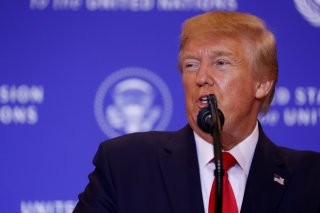 When faced with the prospect of defeat and heavy losses, most states resort to bombast and bravado to give off the impression that they are a far greater threat than they are. Look no further than Baathist-era Iraqi officials who swore that American “infidels” were being slaughtered by Iraqi forces even as American tanks rolled into Baghdad in 2003. There is something primal about such behaviors, as even animals make themselves appear larger when threatened to deter would be attackers.

The Iranian leadership is no different to this tried-and-true formula. Rather than making it clear that Tehran is really feeling the sting of the Trump administration’s “maximum pressure” campaign designed to permanently curb the Iranians’ nuclear weapons ambitions, Iran is instead putting on a show of force. On April 22, the forty-first anniversary of the founding of the Islamic Revolutionary Guard Corps (IRGC), the U.S.-blacklisted terror group launched a military satellite into orbit and rather dramatically declared Iran had become a “superpower.”

While the U.S. Space Command subsequently rubbished Iran’s military satellite bluster as no more than a “tumbling webcam in space,” the timing of the announcement is telling and is designed to show strength and resilience where in fact there is only weakness and uncertainty about how long the mullahs can maintain Iran’s present strategic trajectory.

One need look no further than Iraq, the crown jewel in Iran’s modern expansionist ambitions. Previously, Iraq was the playground of the IRGC’s Qods Force, whose former commander Qassem Soleimani used to make regular, visible appearances in the country. Soleimani, dubbed the “shadow commander” by segments of the American press, effectively ruled Iraq by proxy. He not only had significant influence with numerous Shia Islamist militias, but he had the ear of key ministers, military officials, and even factions within the Kurdistan Region. Recently leaked Iranian intelligence cables give a snapshot of just how much Baghdad was effectively ruled by Tehran’s proxies.

However, since President Donald Trump decided to take decisive measures to curb Iran’s ambitions and ordered Soleimani taken out in early January, the Iranians have been reminded of just how precarious their power is.

Despite Iran now laughably claiming superpower status, the thing with true superpowers, like the United States, is that should they decide to spend time and resources to send a message to second or even third-rate powers, it can easily be done. Soleimani’s death was a sobering example of this power and, in addition to the Trump administration’s sanctions regime that has hammered the Iranian economy, Iran has learnt that it can no longer underestimate American resolve.

To this end, Soleimani’s successor, Esmail Ghaani, has been cautious and has only visited Iraq once since taking over the Qods Force earlier this year. His trepidation is understandable. After all, not even the most diehard fanatics would relish the prospect of being blown to pieces by an American drone. His visit was a secret one, and he has since entrusted the direction of Iran’s political and military proxies in Iraq to another proxy—the Lebanese Hezbollah.

Enter Muhammad Kawtharani, a high-ranking Hezbollah operative who has been considered a global terrorist by the United States since 2013 after he provided “training, funding, political, and logistical support to Iraqi Shi’a insurgent groups.” His apprenticeship under Soleimani put him in good stead with the wider IRGC chain of command and now, with Iranian generals seemingly no longer willing to risk their own skins by being on hand to control their Iraqi proxies, Ghaani has asked one proxy to direct the activities of other proxies and report back to Tehran.

Control over Iraq is Iran’s linchpin in all its regional ambitions, from influencing the Assad regime’s butchering of the Syrian people to directly supplying missiles to Hezbollah in Lebanon for use against Israel. The strategic importance of Iran’s land bridge leading from Tehran to Baghdad and onto Damascus, Beirut and the Mediterranean Sea cannot be understated, and the Islamic Republic’s ambitions were close to full realisation during the Obama administration who bent over backward to appease the mullahs with the JCPOA.

However, Iran is now up against the ropes economically, its top generals have been proven to be vulnerable, and it is facing mounting public discontent due to sinking vast amounts of the public’s treasure into military adventurism while normal Iranians suffer from state repression. To make matters worse for the Islamic Republic, the State Department has now issued a $10 million reward for information leading to the disruption of Kawtharani’s activities which demonstrates Washington is wise to Iran’s game in Iraq.

Secretary of State Mike Pompeo has also recently supported one of the key demands of the Iraqi protest movement that has been ongoing since October last year. Pompeo stated the United States now supports an end to the sectarian quota system that divides political offices between Iraq’s major demographic ethno-religious groups, with a Kurdish president, a Sunni parliamentary speaker, and a Shia prime minister.

The reasoning behind this is clear. American policymakers have come to clearly see that a succession of weak Iraqi governments have drifted more and more into Iran’s orbit since 2003. Governments that are divided along ethnic and sectarian lines are ripe for Iranian manipulation and leveraging, while American interests are squeezed out. This was made abundantly clear by former Iraqi prime minister Nouri al-Maliki who enjoyed American support since coming to office in 2006 only to attend Soleimani’s funeral where screams of “Death to America” were heard.

Far from liberal opprobrium being heaped on Trump’s Iran policy, it is now more important than ever for Washington to maintain pressure on the Islamic Republic and for European allies to step up to the plate and support its American ally. There can be no doubt that present U.S. policy to robustly tackle Iran’s ambitions that threaten American interests and those of its allies is having a tangible effect. Iranian generals are now too afraid to do what they were doing up until the beginning of this year and are outsourcing their command to terrorist proxies, further weakening Iranian control.

Should Joe Biden win the election and reverse the Trump administration’s Iran policy in favour of those of his former running mate President Barack Obama, it will only embolden the Iranian regime, enriching and rewarding it for its bellicose activities and for its unparalleled support for terrorist organisations around the world. For the sake of global security and regional stability, this must not be allowed to happen and the United States needs to leverage its alliances to ensure Iran is compelled to behave responsibly.

Tallha Abdulrazaq is an award-winning academic and columnist specialising in counterterrorism and military history at the University of Exeter's Strategy and Security Institute in England. Follow him on Twitter at @TalAbdulrazaq.