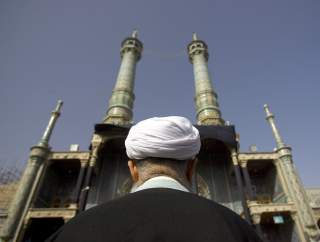 Do not threaten us with war, we are alive

We have entrusted our swords with our answer to you

The word ‘surrender’ has been erased from our vocabulary

These were the words passionately chanted by a Shiite Maddahi performer in Iran in September 2018. As a part of commemorating the holy month of Muharram, Shiites often gather and listen to eulogistic tributes to their archetypal hero, Imam Hossein. Ashura—marking the tenth day of Muharram—is a day of lamentation, as Shiites the world over memorialize the martyrdom of Hossein and the epic tale from seventh-century Karbala that came to define their religion and inform their worldview.

As the opening verses illustrate, the legacy of Hossein is still invoked as a source of strength when Iranians face insurmountable challenges, such as threats of war. While President Donald Trump may claim that a war with Iran would not “last very long,” U.S. policy decisions do not exist in a vacuum.

The Iranian perspective, including its national and historical psychology that drives the country’s decisionmaking, is integral for U.S. policymakers to understand if they are intent on formulating sound Iran policy. The history of Imam Hossein’s legacy and how it has shaped Iranian sensibilities is key to understanding the Iranian psyche in a context of heightened escalation.

The Impact of Karbala

Split on the issue of succession after the death of the Prophet Muhammad, a minority upheld the claim of the Prophet’s son-in-law, Ali, and continued to oppose the leadership that they believed to be illegitimate. This minority came to be known as Shiat Ali, partisans of Ali—today commonly referred to as Shiites. In 680 CE, when called upon by Shiite followers to fight against the oppression of the Umayyad caliph, Yazid, Hossein—Ali’s son and Muhammad’s grandson whom Shiites exalted as the rightful leader—heeded the call and set off to Kufa in modern-day Iraq. On his way, Hossein’s caravan was intercepted by Yazid’s forces in the desert of Karbala. After a ten-day siege, he faced either submission or certain death for himself and his seventy-two devotees. Refusing to surrender, Hossein chose the path of martyrdom and died a martyr’s death. To put it plainly, the successors to the Prophet Muhammad beheaded his grandson.

This watershed moment had two important implications for Shiites: first, Imam Hossein became the quintessential symbol of martyrdom and resistance against oppressors. Second, the failure of the Kufans to fight with Hossein left a scar of shame on Shiites, who would vow never to refuse the call again.

In 1501, Shah Ismail founded the Safavid Empire in Iran and subsequently established Shiism as the empire’s religion. Today, over 90 percent of Iranians hail from the Shiite sect of Islam. Over the centuries, Shiism intertwined with other elements of Iranian culture, becoming one significant thread in the rich tapestry of Iran’s cultural history and identity. In fact, Shia leitmotifs were utilized by Iranian dissidents in the 1960s and 1970s as an indigenous cultural signifier in defiance of the Shah’s imposed nationalism that favored Aryanism, royalism, and a Western standard of modernization.

After the Iranian Revolution of 1979, the architects of the newly established Islamic Republic of Iran (IRI) consolidated their power by silencing the many factions that partook in the historic upheaval and appropriated the revolution’s discourse for their own use. Claiming to be the flag bearers of Hossein’s centuries old quest for justice, the IRI continues to portray itself as protectors of subjugated people and aligns itself with resistance movements around the world.

The Trump administration and Iran hawks in Washington, DC continue to tout the view that a war with Iran would be swift and easy. National Security Advisor John Bolton proclaimed in front of an MEK crowd—a formerly designated terrorist organization—that before 2019 they would have a similar gathering in Tehran, implying that a collapse of the regime was imminent. Notorious anti-Iran hawk Senator Tom Cotton (R-AR), flippantly stated that the United States would win a war with Iran in two strikes, “the first strike and the last strike.” Trump himself has threatened “the official end of Iran” and indicated that a war with Iran would be short lived.

Despite the confident rhetoric, evidence is not on their side. The last full-scale war Iran fought was after the invasion of Iraq in 1980. Similar to the current thinking of the Trump administration, Saddam Hussein calculated at the time that he could capitalize on Iran’s weaknesses and instability soon after its revolution. Though Iraq made initial gains and quickly occupied Khorramshahr, the foreign invasion galvanized the nation to action and solidified the Islamic Republic as Iranians shifted their focus to protecting their homeland.

Iran’s defense was perceived in highly nationalist terms but was also infused with Shiite symbols. While Iraq was better prepared, better organized, and had the support of the most powerful nations in the world, Iran had a potent ideology. The IRI certainly harnessed the religious propensities of its people for the cause, but it was only able to do so because the state was using an existing inclination. Unlike the disgraced Kufans who had abandoned Hossein in battle, Iranians rejected submission, prepared to sacrifice their lives, and fought under the banner of Hossein.

Armed with the formidable strength of their beliefs and love of their nation, hundreds of thousands of Iranian men and young boys became martyrs in an eight-year war. It is only because of their sacrifice that Iran was able to mount a defense, which eventually ended the Iraqi occupation of Khorramshahr and moved the fight into Iraqi territory. Though Iran felt vindicated for overcoming a tremendous challenge against all odds, the loss of life was severe. After eight years of bloody war, and an estimated one million people died; there were no winners.

Today, Iran’s armed forces are organized and well-equipped, larger, and have greater power in the region. Although there is great discontent amongst Iranians after forty years of authoritarian rule, the policies of the Trump administration have played directly into the hands of Iran’s hardliners. By abrogating the JCPOA without provocation, imposing brutal sanctions that hurt ordinary Iranians, and insulting their prideful sensibilities, Trump has made himself a modern day Yazid—an image of oppression and injustice.

Iran’s reactions to these policies have followed an expected path. After the United States violated the nuclear deal, Iran continued to comply with it for over a year, giving time to deal’s other parties to fulfill their commitments. After a year of “strategic patience,” Iran shifted to a more offensive strategy. Like Hossein who challenged Yazid when he was called upon by his followers, Iran acted after no benefits materialized and Iranian people began to suffer more under sanctions. Iran’s calculated breaches of the JCPOA are easily reversible with the intention of gaining leverage—not a bomb. Though drone strikes and tanker seizures may appear like risky moves that may spark conflict, those incidents are seen strictly in defensive terms where Iran is protecting its land and national waters.

In fact, the Iranian government has clearly indicated that it is willing to negotiate, however, it is not willing to do so under duress, nor is it willing to compromise on matters of sovereignty. The language of Iranian officials is all too familiar to its contemporary history, emphasizing its independence. As President Hassan Rouhani recently stated, “we will always be ready for a negotiation that is just, legal, and has respect for the Iranian people and their rights.” He added, “But we aren’t ready to sit at the table of surrender under the guise of negotiations.” Echoing the cries of the Maddahi performer, the message is plain: surrender is not an option.

The epic of Karbala is ultimately a legacy of resistance against injustice, with a central hero that is easy to revere for his repudiation of tyranny. Hossein’s moment of sacrifice immortalized him. The power of this imagery is crucial to recognize in any analysis that considers the costs of war with Iran. As Hamid Dabashi aptly states about Shiism, “It thrives and is triumphant when it is combative and wages an uphill battle.” The Trump administration must act prudently by ending its “maximum pressure” campaign and pinning its hopes of a resolution on dialogue, not capitulation. Trump should be mindful of Saddam’s experience invading Iran nearly forty years ago, lest he endure the same fate.

Assal Rad is a research fellow at the National Iranian American Council. She received her PhD in History at the University of California, Irvine. Follow her on Twitter @assalrad.