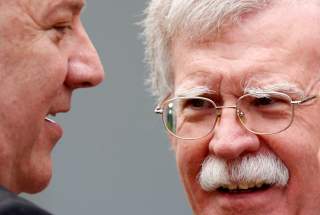 The U.S.-Iran confrontation appears to be moving toward its denouement with the inevitability of a Greek tragedy. A highpoint of optimism was reached in 2015 following the signing of the JCPOA in July that year. It appeared at the time that the American-Iranian relationship was heading in a significantly positive direction and with the most contentious issue resolved it was just a matter of time before Washington’s relations with Tehran would be normalized. As the evocative title of Trita Parsi’s book predicted the United States was in the process of “loosing an enemy.”

However, a major course reversal began with the election of Donald Trump to the American presidency. After repeatedly threatening that he would withdraw from the nuclear agreement President Donald Trump did so in May 2018 declaring, “The Iran deal is defective at its core.” He did so despite the IAEA repeatedly testifying, the last time in February 2019, that Iran was continuing to meticulously meet its obligation under the JCPOA.

The American withdrawal was accompanied, despite objections by its European allies, by the reimposition of unilateral sanctions on Iran’s financial and banking sectors that drastically curtailed Tehran’s ability to do business with the outside world and thus reduced its capacity to sell oil. It also led to the withdrawal of most European firms from prospective contracts with Iran in the energy, construction, and aviation sectors over the fear that if they continued to deal with Iran, then they would be penalized by the United States, where they had much greater interests at stake.

This was followed in November 2018 by Washington’s announcement that it would impose sanctions on countries buying oil from Iran unless they stopped doing so. The announcement was aimed at cutting off Iran’s economic lifeline in order to compel Tehran to accept American demands. These demands included Tehran agreeing to sign an amended version of the nuclear agreement by giving up its right to enrich uranium and closing down all nuclear facilities including those engaged in research for peaceful purposes. The Trump administration also demanded that Iran drastically curtail—if not completely eradicate—its ballistic missile program. Administration officials expected Iran to radically alter its policy in the Middle East—“stop supporting terrorism,” to quote Washington’s lingo—and fall in line with American preferences in the region, especially in relation to Iraq, Syria, Lebanon, and Yemen.

However, eight major importers of Iranian oil—China, India, Turkey, Japan, Italy, Greece, South Korea, and Taiwan—were given Significant Reduction Exceptions for six months to enable them to find alternative sources of supply while reducing the consumption of Iranian oil. It was commonly assumed that Washington would renew those exceptions for at least another six months in order not to unduly disrupt energy markets by creating oil shortages when prices were relatively high and to allow more time for the major importers to adjust to living without Iranian oil.

Those illusions were shattered on April 22 when Secretary of State Mike Pompeo announced that the United States would not issue any additional Significant Reduction Exceptions to existing importers of Iranian oil when the exceptions expired on May 2 in order to reduce Iranian oil exports to “zero.” He went on to say, “How long we remain there, at zero, depends solely” on Iran’s senior leaders and their decision to radically change course on nuclear, missile, and terrorism issues. The obvious objective of the end of waivers, coming as it does on the heels of Washington declaring the IRGC a “terrorist group,” is to bring Iran to its knees and force it to accept American diktat on the issues mentioned earlier.

To many observers this objective appears to be a Washington pipe dream in light of the history of Iranian resistance to foreign dictates. Since the revolution in 1979 Iran has stood up to unprecedented sanctions for four decades and remained unbowed. Iranians are very proud of the continuity and resilience of their state tradition going back to pre-Islamic days but at least to the early sixteenth century with the founding of the Safavid Empire within more or less the same geographic contours as the current Iranian state.

Forcing Iran to change course by the use of external pressure immensely hurts Persian pride and is only likely to consolidate popular support behind the state and its embattled regime, regardless of the regime’s nature. The Iranian decision to defy U.S. pressure was made clear by its leadership in recent statements including those by Foreign Minister Javad Zarif. In the wake of Pompeo’s announcement, Zarif declared that Tehran will continue to defy U.S. sanctions by finding buyers for its oil and warned that Washington should “be prepared for the consequences” if it tries to stop it.

The current American policy can only be expected to aid Iranian hardliners and undermine the moderate government led by President Rouhani. It would end up with Tehran adopting an even more virulent anti-American posture that would further hinder the achievement of American strategic objectives in the region most particularly a negotiated early withdrawal from Afghanistan, a reasonably friendly regime in Iraq, and extrication from the Syrian imbroglio. Iran has powerful proxies in all three countries that it can deploy to not only obstruct the United States from achieving its objectives but also drag it further into these regional quagmires.

Above all, while the latest American policy of further tightening the screws on Iran will please allies Israel and Saudi Arabia, who have been pushing Washington hard to adopt a more confrontationist policy vis-à-vis Tehran, it can well become a prelude to another major war in the Middle East. Pushed to the wall by its inability to export oil, which forms the backbone of the Iranian economy, in sufficient quantities, Iran is likely to retaliate by withdrawing from the nuclear accord reached in 2015 and resuming full-scale nuclear enrichment close to weapons-grade level. In August 2017 Ali Akbar Salehi, head of the Iranian nuclear program, stated: "If we make the determination, we are able to resume 20 percent enrichment in five days.” According to some reports, the Iranian regime is even considering withdrawing from the Non-Proliferation Treaty in light of the recent American decision.

Iran’s withdrawal from the JCPOA and resumption of nuclear enrichment activities beyond currently permitted levels could easily lead to either American attacks on Iran’s nuclear facilities or Israeli air and missile strikes on these targets in the expectation that this will drag the United Sta into a war with Iran as well. Given his predilections and his close relationship with hard line Israeli prime minister Netanyahu, President Trump can easily fall prey to this Israeli strategy. No matter who—Israel or the United States—takes the initiative to attack Iranian facilities, such an attack, if it is undertaken, is bound to invite Iranian retaliation against American targets either directly or through proxies in Iraq, Syria, Afghanistan, and around the Gulf and could snowball into full-fledged war that may even entail the deployment of U.S. ground forces in Iranian territory.

The instability and mayhem that this action-reaction phenomenon could introduce into the Middle East, already in a state of great volatility, can be disastrous for the entire region and could disrupt the flow of energy supplies from the Gulf thus damaging the international economy already suffering from multiple malaises. It is ironic that some of the authors of America’s disastrous invasion of Iraq, such as National Security Advisor John Bolton, are also the masterminds behind the current American policy toward Iran. This policy could well lead to another devastating American misadventure in the Middle East before which the tragic consequences of the Iraqi invasion, such as state failure and the boost to international terrorism, are likely to pale into insignificance.