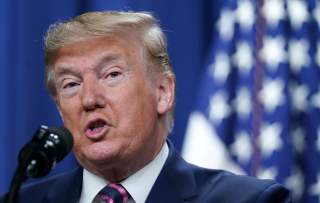 Across the street from my old headquarters building on Bagram Air Base in Afghanistan, President Donald Trump addressed about fifteen hundred U.S. troops on a surprise Thanksgiving Day visit.  “We don’t play for ties,” he told the cheering crowd. “We are winning like we haven’t won in a long time.” The quickest and surest way Trump could turn that claim into ground-truth reality, however, would be to set the date for our full, professional, and speedy withdrawal.  Anything less will extend our losing streak and prevent “winning.”

The United States reopened talks with the Taliban, Trump told reporters, because the Taliban “wants to make a deal.” Taliban spokesman Zabihullah Mujahid, meanwhile, told AFP it was “way too early,” to talk about resuming talks, and that they would “give our official reaction later.” The last round of discussions with the Taliban lasted from October 2018 until Trump ended the talks this past September.  There is little reason to expect any new round of talks to be any more successful.

Rather than hoping to coax the Taliban to end the fighting on terms, we could accept—and there is little reason to believe that will ever happen—there should be one overriding objective for Trump: preserve American interests to the maximum extent possible by ending the war, on our terms, and militarily withdraw. Both of Trump’s predecessors had two terms each to make the “America first” call and both failed.

President George H. W. Bush’s initial commands in Afghanistan actually set achievable military objectives. In October 2001 he ordered the military, “to disrupt the use of Afghanistan as a terrorist base of operations, and to attack the military capability of the Taliban regime.” Those twin objectives were both justified and successfully accomplished by early 2002.

However, five years later Bush dramatically—and, as it turned out, catastrophically—moved the goalposts. Rather than declare the mission a success and properly withdraw the troops, he unnecessarily expanded the mission.

The new objectives in Afghanistan were classic nation-building. The new mission, he said, was to “defeat the terrorists and establish a stable, moderate, and democratic state that respects the rights of its citizens, governs its territory effectively, and is a reliable ally in this war against extremists and terrorists.” Nearly twenty years later, there’s a reason this still hasn’t happened—not one of those aims were militarily attainable nor necessary for U.S. security.

Bush’s successor, President Barack Obama, doubled and then tripled down on issuing nation-building orders that were militarily unachievable. Within two months of taking office, Obama deployed an additional twenty thousand troops to Afghanistan, and by the end of 2009, surged more troops bringing the total to one hundred thousand.

In sending those troops to war, Obama promised that “(a)s your commander in chief, I owe you a mission that is clearly defined and worthy of your service.” The three objectives of that mission, he went on to say, were, “a military effort to create the conditions for a transition; a civilian surge that reinforces positive action; and an effective partnership with Pakistan.” The first of those objectives was militarily unachievable; the second two weren’t military tasks at all.

By 2015, Obama moved even those goalposts, and said the newest mission for the U.S. military was to “remain engaged in two narrow but critical missions—training Afghan forces and supporting counterterrorism operations against the remnants of Al Qaeda.” These goals are little more than vague ideas with no concrete, attainable objectives, and thus made it impossible to ever declare the mission a success.

For all his periodic criticism of “forever wars,” however, Trump has taken no action to end the Afghan war, nor has he issued any clear, attainable military objectives for the U.S. troops there.  As a predictable result, the war runs on autopilot. That means we are spending approximately $50 billion a year and sacrificing the lives of countless American servicemembers to fight a war that makes the United States less secure and less prosperous.

Trying to convince the Taliban to agree to our ideal terms virtually guarantees failure because they are in a comparatively strong position on the ground and we have little leverage to compel them to accept an outcome they don’t like. Trump’s best play would be to immediately announce a complete military withdrawal from Afghanistan, to be executed in a professional way, conducted over a well-telegraphed timeframe and closely coordinated with the government of Afghanistan. This places the key decisions in America’s hands, rather than being subject to Taliban intransigence.

Keeping Americans safe from any terrorist threat—which has never been helped by having troops on the ground in Afghanistan—is accomplished by our powerful global ISR-Strike (intelligence, surveillance, and reconnaissance) capabilities, coupled with effective cooperation between our federal, state, and local law enforcement agencies.

That powerful capability won’t change after withdrawal nor be weakened by it. If Trump truly wants a successful outcome in Afghanistan, then he’ll take charge and order the withdrawal instead of trying to negotiate with an unreliable and violent radical Islamic group.